A collaborative photo book that examines what it means to fall in love and stay there. 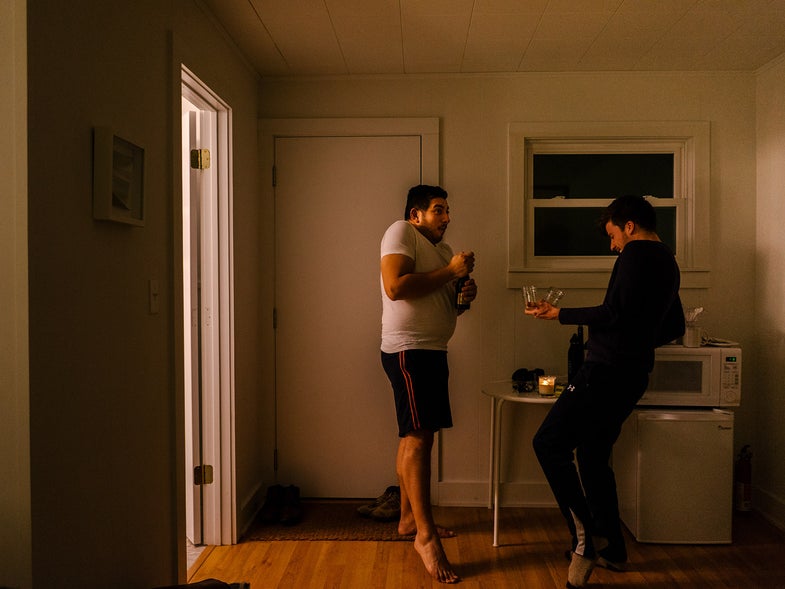 From the forthcoming book, When We Were Strangers, by Jake Naughton and Juan Anibal Sosa Iglesias, to be published by Red Hook Editions in early 2019. Jake Naughton
SHARE

Dating a photographer often means playing the role of a muse. There will be a lot of seemingly-inconsequential moments where a camera is in your face, or times where the light is just doing something nice. Taking pictures is what photographers do.

“I think it’s pretty common for photographers to photograph people that they love and what is around them,” says Jake Naughton. “I started photographing Juan before I even considered myself a photographer.”

Jake and his partner Juan Anibal Sosa Iglesias, who have been together for nearly eight years, took things one step further though. They dove into a years-long collaborative photo project together.

When We Were Strangers is a visual examination of what it means to fall in love, to stay in love, and all of the bumps that will certainly come along the way. The pair are currently raising funds on Kickstarter to publish the work through Red Hook Editions in 2019.

Although Jake is the professional photographer of the couple, Juan is far more than a passive subject. Decisions about what to shoot and when to shoot have always been made together. Sometimes Juan turns the camera on Jake. The couple also uses a combination of tripods, timers, and triggers to capture images in which they appear together, but there is still a matter of chance and magic in the frames. An image from their fifth anniversary appears to show the couple dancing with wine glasses.

“What is happening in that picture is Juan has just shot a champagne cork into my eye,” Jake explains. “That was just lucky timing.”

The less celebratory moments are in there too. Jake and Juan spent a year and a half in a long distance relationship—Jake in New York for grad school and Juan back in DC where the two initially met. There are images that capture those moments of distance, difficulty, and isolation. Jake says that it was actually Juan that suggested that the body of work shouldn’t just be about the happy times.

“Being in love is difficult and as much as it comes with those sort of high and happy moments, there are always a lot of moments of uncertainty and distance,” Jake says.