Romke Hoogwaerts on capturing the dueling bonfires of two seaside neighborhoods in Holland. 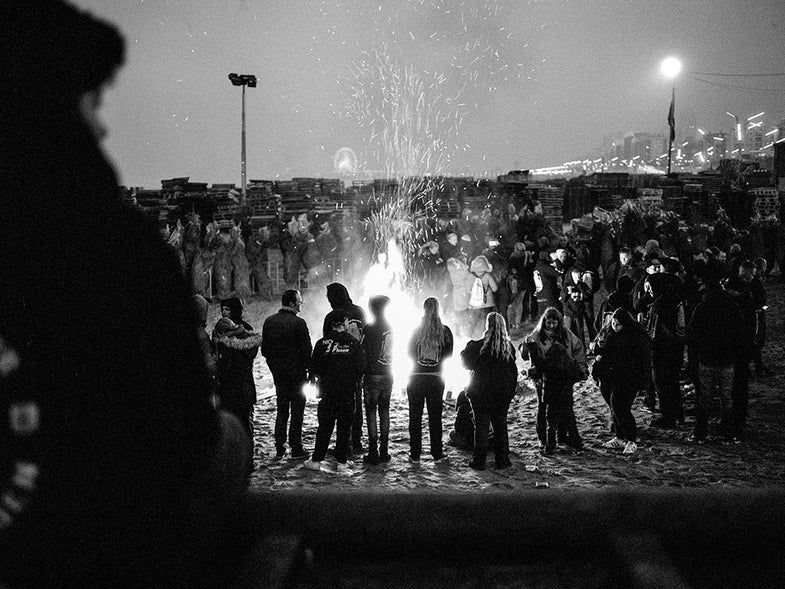 The community at the campfire beside Vreugdevuur Scheveningen, Dec. 29, 2016. Romke Hoogwaerts
SHARE

Cultures around the world have their own unique ways of celebrating the arrival of a new year. Americans watch a glittery ball drop in frigid New York City temperatures. In Denmark, they smash plates against the doors of their friends. In Japan, they ring bells. Two seaside neighborhoods in the Netherlands, however, organize a bonfire competition. Photographer Romke Hoogwaerts discovered the competitive burn between the Dutch neighborhoods of Scheveningen and Duindorp by mistake. His grandfather is originally from Scheveningen and, while walking his family’s dogs on the beach, he spotted a massive tower of pallets in the distance.

“My dad said to stay away—it’s just a bunch of hooligans,” he recalls. He didn’t heed that advice.

The dueling bonfires of these two neighborhoods are the subject of his first photo book called Vreugdevuur Scheveningen (Bonfire Scheveningen in English) which is currently raising funds on Kickstarter.

Prior to the ‘90s almost every block in The Hague had a bonfire of discarded Christmas trees, tires, pallets and even cars. The events surrounding the bonfires often turned violent, and caused considerable damate requiring costly cleanup. It was the local police force that actually pushed the celebration to the area’s beaches as a way to help contain the burns and control the crowds.

“Duindorp’s beach fire started getting noticeably larger and larger,” says Hoogwaerts. “The community in Scheveningen, just across the harbor, wasn’t about to let that happen.”

Thus a neighborhood rivalry was born.

These days the two neighborhoods rely solely on pallets gathered by community members over the course of the year. The structures are typically made of 100,000 pallets and donations come from people all over the Netherlands. Crews begin building the day after Christmas at 10pm and work non-stop for the next six days—even through the rain and wind. The entire structure shakes as new pallets are added to the top. By the final day of stacking the piles are the size of apartment buildings. And at midnight on New Year’s Eve they light the structures on fire and crowds gather on the boardwalk to watch the massive burn. It’s not unusual for the flames to endure for two-to-three days before they are extinguished.

“It’s this huge manifestation of working-class anger expressed in this beautiful, creative way. It’s more than just a celebration, more than just a big bonfire,” he says. “It’s a testament to what people can do when they bring their hands and hearts together.”

Hoogwaerts is the founder of an independent photo journal called Mossless and has worked as a photo editor at Bloomberg, The New York Times Magazine and MSNBC—so diving into the city’s newspaper archives to see what kinds of historical images might already exist was a no-brainer. He estimates that he probably reviewed tens of thousands of images.

“I saw an opportunity to connect the past and the present visually,” he says. “I knew the right approach would be to photograph this story in black-and-white.”

Shooting the project on black-and-white film presented its own set of unique challenges though. Hoogwaerts has spent the last two years documenting the process, shooting film for the book and video footage for a documentary by the same name.

“I had no idea how my film, or my light meter, would react to a fire of this magnitude,” he says. “I wanted the detail of the fire to be really visible. Expose it wrong, and you might see the foreground, but the fire just becomes this big white blob.” He shot some test rolls with a campfire to get a better idea of what to expect during the actual burn.

A local Dutch press photographer by the name of Jos van Leeuwen provided Hoogwaerts with the historical context of the burn. Hoogwaerts found van Leeuwen’s work while digging through the city’s archives, looked him up and noticed that he had a storefront in the area. He arranged a meeting thinking he might be able to interview him for a few hours for background on the project.

“He immediately gave me a tour of his studio, which really doubles as an impressive museum of police artifacts,” Hoogwaerts recalls. “He has hundreds upon hundreds of neatly organized and numbered pastebooks of his photographs and newspaper clippings. I spent four days with him, documenting his life, his studio, his struggles and his thoughts.”

Select images from van Leeuwen’s archives make up the second half of the book and pair with an essay that details the history of these holiday burns. The first half is made up of Hoogwaerts’ images from the last two years and a written account of his visceral experience attending the burn.

“It’s hard to describe how intense these fires are,” he says. “I hope I was able to translate their power into my photographs.”