On the Wall: ‘Take Ten’ Explores a Woman’s Perspective

What are the most critical issues facing women today? A new photography exhibit addressing that very overwhelming question opens tomorrow... 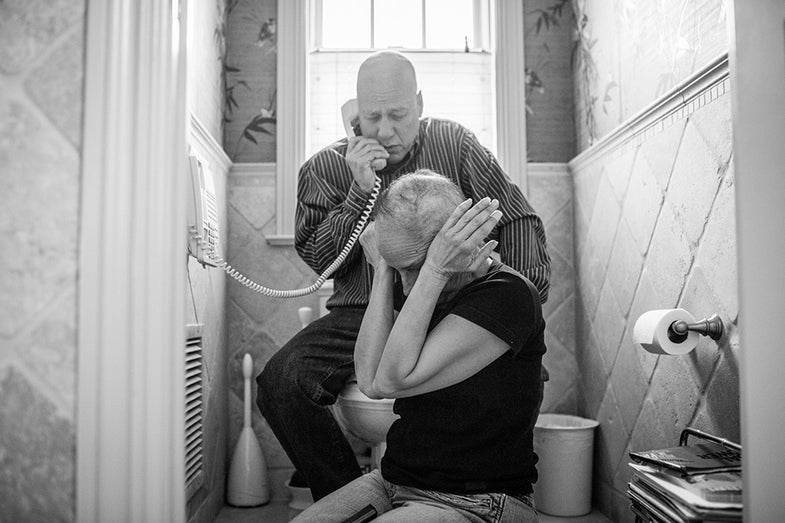 Howie and Laurel Borowick sit next to the bathroom telephone as they hear the most recent news from their oncologist- good scans for both of them, and their respective tumors are shrinking. Chappaqua, New York. March 2013. Nancy Borowick
SHARE

What are the most critical issues facing women today?

A new photography exhibit addressing that very overwhelming question opens tomorrow evening at the Rita K. Hillman Education Gallery inside the School at ICP. “Take Ten,” which was co-curated by ICP alumna Nancy Borowick and Alison Morley, Chair of the Documentary Photography and Photojournalism Program, features photographs of 10 alumnae of the program who are working across the globe and examining a range of topics such as sex trafficking in Moldova and Romania, the $5 billion child beauty pageant industry, and the history of slavery in New York City.

“In an industry dominated by men I appreciate the platform to be able to share, not only stories about women, but stories by women,” says Nancy Borowick, who will display work from her deeply personal photo project, “Cancer Family,” about her mother who passed away from the disease last month. “The day that we actually hung the show was the day of my mom’s funeral,” she says.

According to Morley, it was Borowick’s long-term project that actually inspired the show. In selecting the other participants Morley says she was interested in finding photographers who were supporting other females in their projects—“sex workers who are fighting for their rights, women becoming priests, women dealing with their own racial identity in Africa as well as in America,” she says. “In a broad way they all have a documentary practice to their work, whether it be posed portraiture or actual reportage.”

Because photography remains dominated by male perspectives, a show dedicated to bringing the vision of many women together is a refreshing one. “It has been a joy being able to pull this community together,” Borowick says. “We are all sort of spread out—trying to tell our own stories, get the word out, and fend for ourselves. Sometimes we might be each other’s competition, but beyond that there is a community and a sisterhood.”