Robin Hammond On Creating a World Where Love is Never Illegal 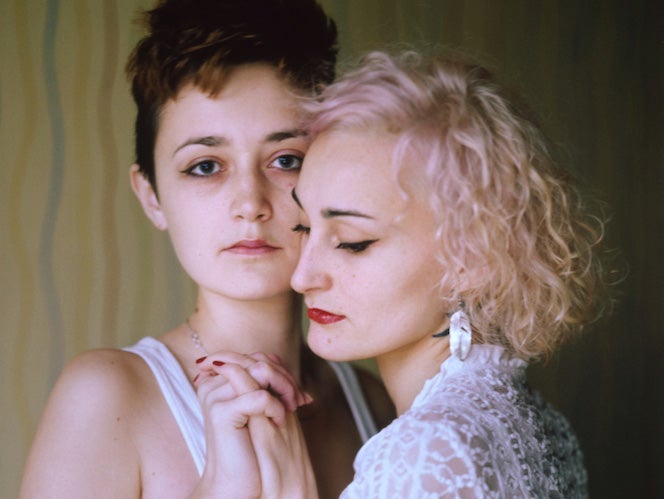 A posed portrait of Lesbian couple ‘O’ (27, right) and ‘D’ (23, left). They were on their way home after a jazz concert, it was late by the time they got off at their subway stop. They were alone as they went up the escalator to get to the street level apart from two men in front of them. As they traveled up to street level, they took each other’s hand and kissed. They came out of the subway and starting walking home. Suddenly ‘O’ felt a blow to the back of her neck: “fucking lesbians” the stranger yelled. He then turned and punched ‘D’ in the face. ‘O’ tried to defend her but was punched in the face too. ‘O’ screamed: “what are you doing? We are just sisters” he replied, “Don’t lie, I saw you kissing and you are spreading LGBT propaganda”. The remark was in reference to the ‘Anti LGBT Propaganda Towards Minors” law recently adopted in Russia. He continued to kick and punch ‘O’ and ‘D’ screaming “No LGBT” and finally “If I see you again I will kill you” and then left. All this time the attackers colleague was filming the attack with his phone. Talking about the attack ‘O’ says: “The real fear I experienced was not for myself, it was for the one I love. The fear struck me when I realized I couldn’t do anything to protect her.” ‘O’ continues: “Now, in Russia, holding hands is dangerous for us. But if the goal of these attackers was to separate us, they failed. They only made our relationship stronger”. St Petersburg, Russia. November 2014. While many countries around the world are legally recognizing same-sex relationships, individuals in nearly 80 countries face criminal sanctions for private consensual relations with another adult of the same sex. Violence and discrimination based on sexual orientation or gender expression is even more widespread. Africa is becoming the worst continent for Lesbian, Gay, Bi-sexual, Transgender, Queer, Inter-sex (LGBTQI) individuals. More than two thirds of Robin Hammond
SHARE

In the last few years within the United States there have been a number of victories for members of the LGBT community—openly trans people gaining acceptance in Hollywood, executive orders against LGBT workplace discrimination and the legalization of same-sex marriage throughout the nation. With all of these landmark achievements it’s easy to forget that in 2016 there are still 2.8 billion people who live in countries where consensual same-sex acts between adults are a crime.

“One would think we would moved past this barbaric notion that one should be killed for who you are attracted to,” award-winning photographer Robin Hammond says in a new TED Talk.

This stark realization—that in many places around the globe individuals continue to be persecuted because of their sexual or gender identity—is what led Hammond to initiate his global portrait project Where Love is Illegal.

Pulling off a successful portrait based project is tricky when your subjects are people who have been forced to hide their true identities their entire life.

“A photograph poses a great risk,” Hammond explains in his talk. “For some, should they be identified they could face further persecution. For others, they could be killed. But they wanted their stories heard and I was desperate to share them. The only way that could happen is if it was done on their terms.”

Hammond approached this conundrum by adopting a new way of photographing his subjects. From the get-go every session was an “intimate collaboration” he says. His subjects selected their clothing, their pose and how much of their face they would reveal. He asked to hear their stories as well—a written testimony of the things that they had experienced in their life. Hammond shot using large format polaroid film, that way every single sitter would have an opportunity to destroy their image if they felt it might endanger them.

But according to Hammond very few of the Polaroids were destroyed during the year-long project. “Here, perhaps for the first time, they were able to control how they were seen and how they were heard,” he says.

Although the faces of his subjects are often concealed, the portraits and the accompanying stories from each sitter remain utterly magnetic.

“The power of authentic personal stories is they have the potential to break down the barriers that divide,” says Hammond. “They have the power to have us see the person and not just the label.”

Check out Hammond’s full talk in the video below.