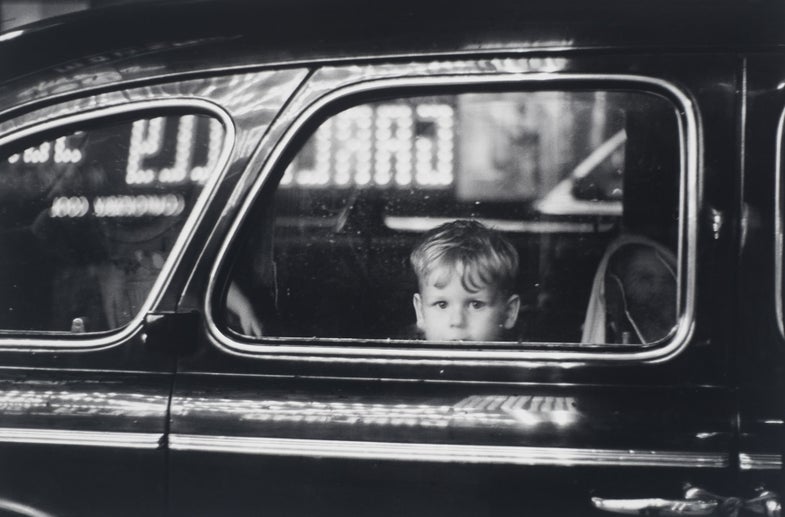 Over a career spanning seven decades, Elliott Erwitt has epitomized the traveling photographer with an eye for solitary souls, absurdist surprises, and touching family moments—glimpses of humanity within a chaotic world.

“The alienated figures on the street, the isolated family members, the sad anthropomorphic dogs, the lonely children—these are the figures that he connects with as he travels,” says Jessica McDonald, curator of a vast retrospective of Erwitt’s photography at the Harry Ransom Center in Austin, Texas. “Certain familiar places, like beaches and museums, he seeks out wherever he goes. There are all these repeated themes of belonging nowhere but finding something familiar anywhere.”

Accompanied by Aperture’s 300-page monograph of the same title, Elliott Erwitt: Home Around the World runs at the Harry Ransom Center from August 15 through January 1, 2017. Located on the University of Texas campus, the Ransom Center acquired Erwitt’s entire back catalog in 2015. “The show and book are essentially introductions to this huge collection,” McDonald says, “and since we’re a research institution we’re hoping it will spark interest and draw researchers in to look at the rest of it.”

McDonald attributes Erwitt’s curiosity, alienation, and adaptability to his early life as a French-born Jewish refugee. He was 10 when his family left Paris for the United States in 1939 at the outset of WWII. “For the first 15 years of his life he was constantly displaced by world events and family events—trouble with Hitler, trouble with his parents—and sort of left to his own devices at 16,” she says.

Still going strong at age 88, Erwitt retains his wanderlust. “He was shooting in Cuba earlier this year, and he recently went to Portugal and Italy to celebrate his birthday,” McDonald says. For this retrospective project, Erwitt was a willing collaborator. “He’s been very generous with interviews and insights,” McDonald says. “He signed a book to me earlier this year: ‘To my favorite psychoanalyst,’ because of all the detective questions I’ve been asking him. But he wasn’t in charge of selecting or organizing the content. He stepped back from that.”

In contrast to many selective exhibitions of Erwitt’s work, including a 2011 show at the International Center of Photography called Personal Best, the Ransom Center survey unveils a trove of lesser-known imagery. “We’re showing a wider range of photographs, including lots of unfamiliar things,” McDonald says, “and looking at their original context—showing tearsheets, magazines and contact sheets and exploring the threads that connect all the work.”

Much of Erwitt’s most artful imagery stems from commercial assignments for such magazines as Look, Life, and Holiday, or from photojournalism jobs for his agency, Magnum Photos. “A lot of his strongest pictures you see in museums are individual frames out of several dozen made on assignment for magazines,” McDonald says. “He was mining opportunities while on the job—particular shots later stood out as works that could live on their own. They have lasting visual power and emotional resonance. But we can look at them and say, ‘That was for this assignment or that one,’ and point out where he was and why he was there at that moment.”

The retrospective also covers an oft-overlooked corner of Erwitt’s oeuvre: filmmaking. The book includes a chapter on his cinematic work—as a still photographer and director of adverts and documentaries—while the exhibition features clips from several film projects. “We’re trying to show the entire span of Erwitt’s work,” McDonald says, “and how this is the result of one person’s life—it all fits into an extended visual diary.”