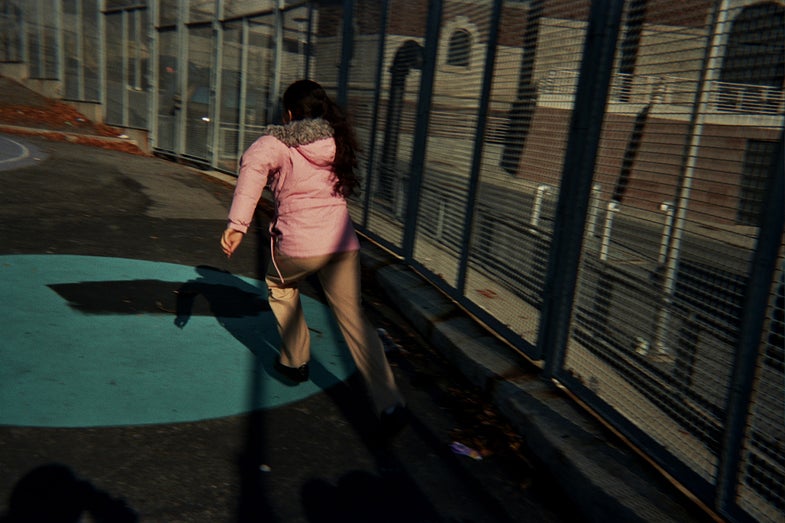 "I love how when I'm in the school, hallways are so quiet when I walk through it's just great because you can just hear yourself think about how you are going to plan once you get in class. Just stay focused on what is around you.". © Aaliya Colon
SHARE

For many New Yorkers, the massive redbrick buildings that take up hundreds of New York City’s blocks are as identifiable as the city’s more famous skyline structures. Maintained by the New York City Housing Authority, also known as NYCHA, these once well-regarded developments have been painted with a wide and often negative brush in the last three decades. Today they are often seen as deteriorating warehouses for the city’s poorest residents and a dangerous breeding ground of nefarious activity.

“A lot of things that come to mind when people think of public housing are crime, disrepair and gang violence,” says Chelsea Davis, a photographer and educator who is one of the editors behind a new book called Project Lives. “Really, that is a small fraction of the overall story. There are so many people with pride for their homes, who are hugely inspirational and just raising their families no different than any other New Yorker.”

In 2010, Davis teamed up with George Carrano and Jonathan Fisher to create one of New York’s largest participatory photo projects. Initially launched as a one-day class, Project Lives grew into an ongoing 12-week workshop that gave 200 New Yorkers living in 16 of the city’s public housing buildings the tools to transform the perception of what it means to live in NYCHA Housing. Although NYCHA continues to provide homes to nearly a half-million New Yorkers, making the organization the city’s largest landlord, there has been a steady decline in both funding and public perception of the program.

“If you’ve been acquainted with public housing you see that there is a stark contrast between what the general public thinks about public housing and what public housing is actually like,” says George Carrano, who initially conceived the idea for Project Lives. Carrano believed that through photography, NYCHA residents would be able to turn the perpetually negative presentations of their lives and homes seen on the news and pop culture on their head.

“Being able to put cameras in the hands of those who actually live this experience on a daily basis was a way to create an authentic narrative,” Davis says.

Through the 12-week course Davis introduced both her preteen and senior students to the history of photography, armed them with disposable Kodak cameras, and taught them to focus on a variety of photographic techniques such as using light and shadow, composition and color when making their images. The weekly assignment was always the same: photograph what is important to you.

According to Davis, the photos that her students brought back week-to-week were overwhelmingly positive: photographs of friends and family, and objects of importance. “There was a lot of pride for their homes,” Davis says.

The strongest photos from these 12-week workshops have been collected into Project Lives, which will be released by powerHouse Books on April 7, 2015. Carrano and Jonathan Fisher both say they hope the book will bring the federal government back to the table, in terms of financially supporting New York City’s largest landlord.

Fisher believes these long-running negative perceptions of life in public housing are what led to lack of support. “[The government has] decided that it is a losing game and not worth investing more funds in,” he says.

“Given the opportunity,” Carrano says, “people can capture their day-to-day realities and change people’s minds about who they are and how they live.”

A selection of the photographs from Project Lives will be on view at the powerHouse Arena from April 6, 2015, with a book launch on April 8, 2015.