Picturing the Life of Cecil the Lion 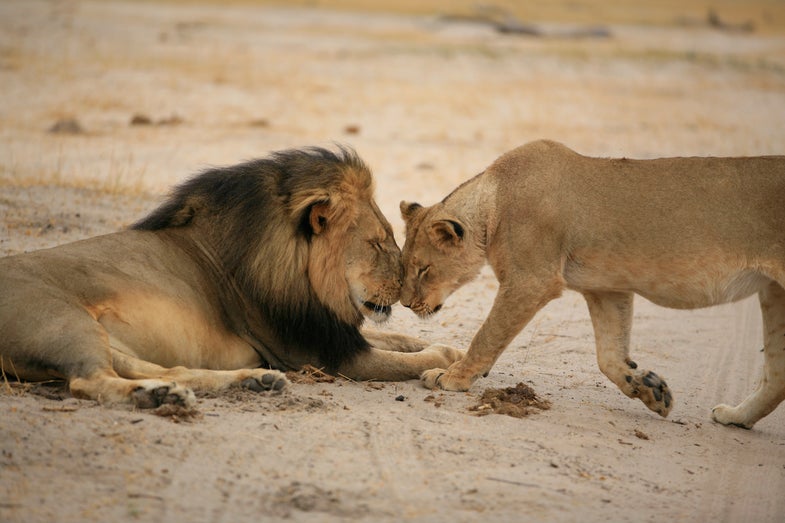 Cecil and his lioness: This is Cecil when he had 20 or more lions in his family. Here, a lioness pays her respects. October 21, 2012. © Brent Stapelkamp
SHARE

Last summer when the world learned that a lion known as Cecil had been killed by a trophy-hunting dentist from Minnesota, the blowback came swiftly. Although it’s common practice for American hunters to travel to places like Africa and pay large sums of money for the privilege of slaughtering animals, Cecil happened to be a collared lion, one who lived on Zimbabwe’s Hwange National Park and was part of a multiyear study run by the Wildlife Conservation Research Unit at Oxford University.

Cecil wasn’t just any lion—he was one of the Park’s most popular and a lion whose life had been documented photographically by researchers for a number of years.

“The minute the story broke there was a desperate need to put an image or a face to the name,” says Brent Stapelkamp, a photographer and former researcher with the Hwange Lion Research Project. “It just so happened that I had spent loads of time with Cecil getting the best photographs I could. These are the ones the world has seen. Once people could see Cecil’s image, I think that really made a difference.”

According to Stapelkamp, these images were crucial in drawing international attention to Cecil and the long-running controversy surrounding trophy hunting of endangered animals. A selection of Stapelkamp’s photographs of Cecil and the other lions of Hwange are currently on view at Anastasia Photo in New York City as part of Hwange: Cecil’s Kingdom.

Stapelkamp began working on the research project in 2006, although he didn’t start seriously photographing the lions living in the park until 2008—once he had some decent camera gear and lenses. He says that using photography in conjunction with the GPS tracking collars was an excellent way to help identify and track the animals, essentially creating a visual record their lives. Stapelkamp also happened to be the last researcher to photograph Cecil before he disappeared, and he was thrust into the spotlight once it was discovered that the lion had been killed.

“I was a reclusive and elusive lion researcher and all of a sudden the world was literally calling me. I would sit up until the early hours of the morning waiting for interviews in different time zones,” Stapelkamp says. “It was not an easy time for me or my family as we came under loads of pressure from every direction, but I felt it was the best opportunity to speak up for lions.”

The images on view at Anastasia Photo capture the day-to-day life of Cecil and the other lions at the National Park—the “holy grail” shots of lions stalking prey are presented alongside quieter moments of lions bonding and napping on the grounds as well as images that capture how physically close these wild creatures are to manmade infrastructure.

“I would hope that my images speak of the vulnerability of the species and their landscapes,” says Stapelkamp. “Where we were once in their world, they are now in our world and struggling to survive on our terms. Dispelling the illusion of wilderness is interesting to me.”

Hwange: Cecil’s Kingdom will remain on view at Anastasia Photo through June 5.