Photographing the Birth of Hip-Hop 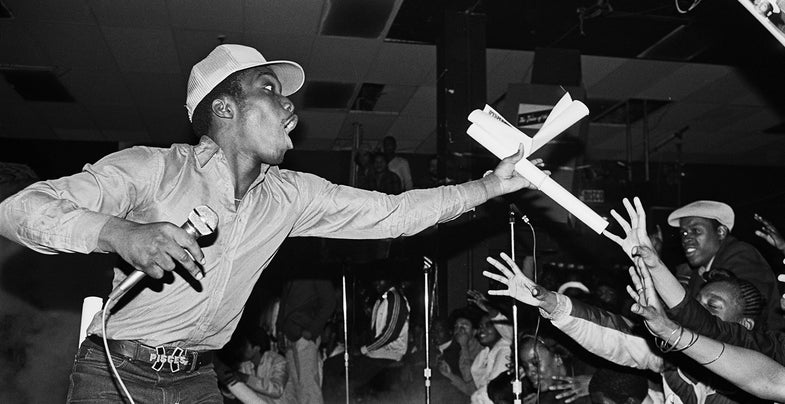 The Museum of the City of New York is throwing it way back to the earliest days of days of hip-hop with a new group photo exhibition called “Hip-Hop Revolution.” The show features early work from Janette Beckman, Joe Conzo and Martha Cooper, who all witnessed this Bronx-born art form explode into the cultural phenomenon it is today.

“Nobody was that interested in it, no one knew how big it was going to get,” Janette Beckman tells American Photo. She moved to New York from England in the early ’80s and started photographing the genre. “It is amazing, 30 years later, people going ‘oh you photographed legends.’ I guess I did, but they weren’t legends when I was taking pictures of them.”

“Hip-Hop Revolution” is a follow up to last year’s “City as Canvas” exhibition that focused on graffiti art in New York City. Although both art-forms have their differences, they are both movements with distinctive roots in New York City. “Hip-hop is yet another incredibly vibrant example of how the world has been shaped by what started in New York,” says Susan Henshaw Jones, the Ronay Menschel Director of the Museum of the City of New York.

The exhibition features over 100 photographs taken from 1977-1990 presented alongside various pieces of ephemera from each of the photographers. The show’s biggest strength is how each of these shooters has brought a slightly different perspective to covering this culture: a documentary photographer fascinated by the story, a former punk photographer transplanted from England, and one who was essentially born into it.

“I’m the only photographer that came from within the culture,” says Joe Conzo, who the New York Times once described as the man who “shot hip-hop’s baby pictures.”

Conzo contributed some of the earliest images to the show because many of the performers were his peers. “I grew up with all these guys, I just happened to be that chubby kid with the Angela Davis afro who loved photography.” Conzo shot very early pictures of artists like the Cold Crush Brothers, Grandmaster Caz and Kool Herc. Conzo says in those days, traveling to gigs around the city, it was almost like he was part of the band.

“I didn’t set out to document what was happening. I was just documenting my friends,” he says.

Martha Cooper was already an established photojournalist working for the New York Post when hip-hop was breaking. “I was out with my cameras every day,” she says. Cooper’s work as a Post photographer led to her documenting New York’s emerging graffiti movement. That work was featured prominently in last year’s “City as Canvas” exhibit and through her relationships with those graffiti writers she discovered the break dancing scene and took some of the earliest pictures of the new dance style.

As a photojournalist, Cooper says she was always interested in capturing the larger picture of this emerging dance movement, not just the performance aspect. “One of the reasons I followed the kids into clubs was that I wanted to see where is this going. Little did I know it was going around the world,” she says. “I [wanted] to document different angle of the same story because I was trying to propose stories to different magazines—not very successfully, I should add.”

According to Cooper, her pitches to picture editors of the day fell on deaf ears. She recalls a meeting with an editor at Newsweek and as she described kids spinning on their heads the editor rolled his eyes at her. “It was as if I was a little too early,” she remembers.

By the time Janette Beckman arrived from London in the early ’80s hip-hop was starting to gain a global following. Beckman, who had photographed the early days of punk for music magazines in England, says she saw a lot of similarities between the two genres.

“New York, like London, had a terrible economy,” she says. “There was no work for kids coming out of school, it was that whole punk no future thing happening, only on a different level.”

Beckman says that when she first landed in New York she expected to pick up work easily. “Photographing The Police and The Clash, I thought I would walk into record companies and get jobs photographing rock bands,” she says. “Unfortunately, at that time, my style wasn’t really in fashion. My stuff was too gritty.”

Although rock labels weren’t into her look, emerging hip-hop labels like Def Jam, Sleeping Bag Records and Next Plateau latched onto her. Before long she was shooting portraits of artists like Run DMC, LL Cool J, and Salt-N-Pepa for album covers and magazines.

Beckman’s portraits of these young performers are presented in the show alongside a smaller selection of collaborative “Mash-Ups” that came from her long-time friendship with Cey Adams, the graffiti artist and former creative director of Def Jam Records. Beckman’s prints were given to a variety of graffiti artists who added illustration to the images. “It is very hip-hop in a way—making something new out of something old,” she says. “It combines photography and art and also references old school graffiti as well as new street art.”

Hip-Hop Revolution will be on view at The Museum of the City of New York through Sept. 13, 2015.