Peril in the Lower Omo Valley

After apprenticing with the legendary Richard Avedon, Maynard Switzer set up shop as a commercial photographer. “I was shooting fashion... 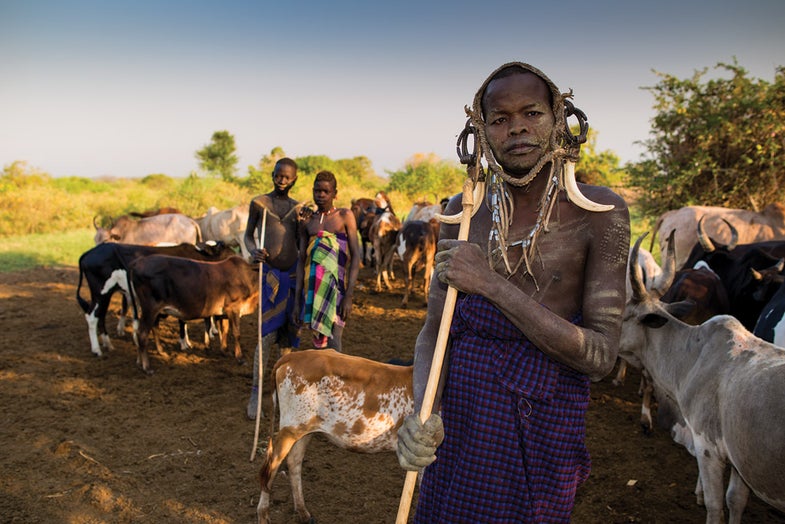 After apprenticing with the legendary Richard Avedon, Maynard Switzer set up shop as a commercial photographer. “I was shooting fashion and beauty,” he says, “but I always found myself, if we went to shoot someplace, more interested in the culture of the people than anything else.” Switzer was also an avid bicyclist, and in the late ’90s he had a cycling accident that resulted in a serious head injury. “That sort of kept me out of the studio,” he recalls, “because my doctors suggested that I not work around flashing lights for a year. So due to a combination of things—good and bad—that was it. I called my agent and said, ‘No more fashion; no more beauty.’”

In 1999 Switzer followed his muse to take up travel and documentary photography, using natural light to shoot beauty of a different sort throughout the world—from Central Asia to China, from Cuba to Africa. Though he divides his time between New York City and Toronto, he’s often on the road—and especially drawn to cultures whose way of life is on the brink of extinction. “A lot of these places are disappearing around the world, quite fast,” he says.

Switzer discovered one such vanishing culture in 2012 while doing research before a trip to Ethiopia, which is split and fed by the mighty Omo River. “In the lower Omo Valley, the Ethiopian government is building a giant dam called the Gibe III and forcing all these tribes in that area off their land,” Switzer says. “They’re leasing out huge tracts of land to companies—Malaysian, Indian, Italian, Korean—for massive farms to grow cash crops such as palm oil and cotton. These need a tremendous amount of irrigation, so they want to dam up the Omo River. And for the Ethiopian tribes who live there—more than 200,000 people—the river is their life source: The natives rely on it to flood every year so they can grow their own food and feed their cattle.”

Further, Switzer learned, many of these tribes have called this land home for centuries. According to Survival International, a group that advocates for the rights of tribal people worldwide, the Ethiopian government “has started to evict Bodi, Kwegu, and Mursi people from their land into resettlement areas.” The organization reports beatings and jailings of people who have fought back and even rapes and killings by military patrols.

Such reports intensified Switzer’s interest in the Omo Valley. Earlier this year, he spent a month documenting the region’s indigenous tribes, and he plans to return in October. “My goal is to capture a vanishing culture,” he says, “and to bring some light to what’s going to be lost if all this takes place. I think as you get into the politics, your work evolves into things that you might not have thought about.”

Yet most of Switzer’s Omo Valley portraits do not depict confrontations. “I’m not a war photographer,” he notes. “There are enough people who do that. I’ve been in some dicey situations, but I’m not looking to get my head blown off.” Still, the tension between the tribes and government soldiers—and between rival tribes themselves—creates the need for safety precautions. “In some of the places we stay, we have to pay for a guy to guard our tent with an AK-47,” says Switzer. “Some of the tribes are a little bit more aggressive; it depends on where you go.”

He also hires local guides to facilitate travels and communication. “I think portraits are much better if they show people in their environment, rather than, say, a set-up shot,” he says. “There should be something about who this person is and the way they live. I like to capture people doing their natural things, oblivious of me. So a guide will talk to them and explain.”

Switzer hopes to help tilt the geopolitical balance in the region: A public outcry has actually slowed the progress of the Gibe III dam’s construction. Survival International reports that, although more than 50 percent of the dam has been built, several banks and governments have withdrawn funding in recent years. Switzer says the region’s fate “is sort of in limbo right now. Human-rights groups are screaming and yelling about this, too, so I don’t know what’s going to happen. But it means an enormous amount of money to the Ethiopian government—they have to get the water to irrigate these lands. In doing it, they’re losing this tremendous culture of all these tribes. And once it’s gone, it’s gone.”

Close-Up: Maynard Switzer
MaynardSwitzer.com
Lives In: New York and Toronto
Studied At: Art Center College of Design, Pasadena, CA
Mentors: Guy Bourdin, Richard Avedon: “From Avedon I learned how important movement is to an image and having a close rapport with whomever you work with.”
**Clients Include: **Afar, National Geographic Traveler, Geo; Nikon World
**In the Bag: **Two Nikon D800 bodies; Nikkor lenses (15mm, 28mm, 35mm, 50mm, 85mm) and zooms (14–24mm, 24–70mm, 70–200mm); MacBook Air with two solid-state external drives; Nikon Speedlight SB-700 and SB-800 flashes. “Available light is my favorite,” Switzer says, “but there are times I use flash and try to make it blend with the natural light. I don’t often use a tripod because I move around a lot. This I think comes from shooting fashion: I like to have people moving and you have to be able to move with them.”