One to Watch: Shannon Jensen

For Shannon Jensen, work is a continual process of searching and striving. “I only want to be a photographer if... 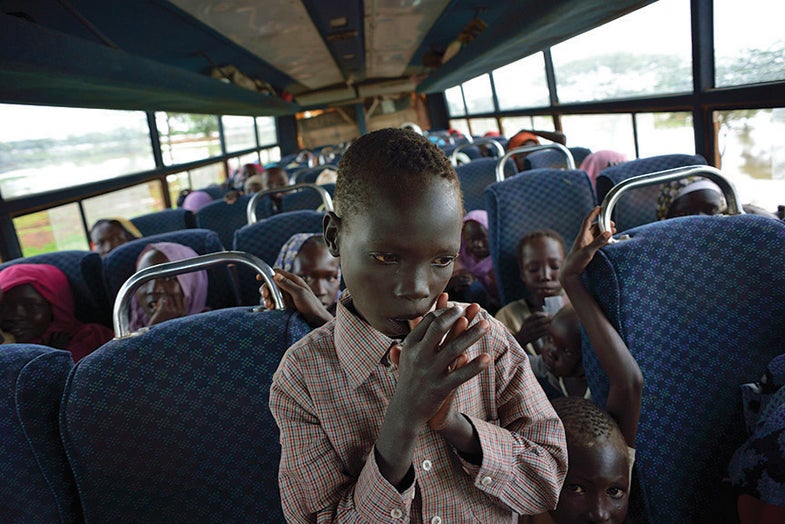 Gasim Muhammed stands in the aisle of a UNHCR bus transporting him to his new home in Yusuf Batil camp after weeks of squatting in temporary sites with his family. Thirty thousand men, women and children from Sudan’s Blue Nile State sought an end to nine months of terror and trauma when they crossed the border into neighboring South Sudan in June 2012, becoming refugees for the first time in their lives. They joined a population of 70,000 who preceded them in fleeing Khartoum’s deadly military campaign to crush the northern remnant of the Southern liberation movement. The journey, made perilous by the dearth of water and food as well as the risk of ambush and attack, required weeks of walking after months of internal displacement. Shannon Jensen
SHARE 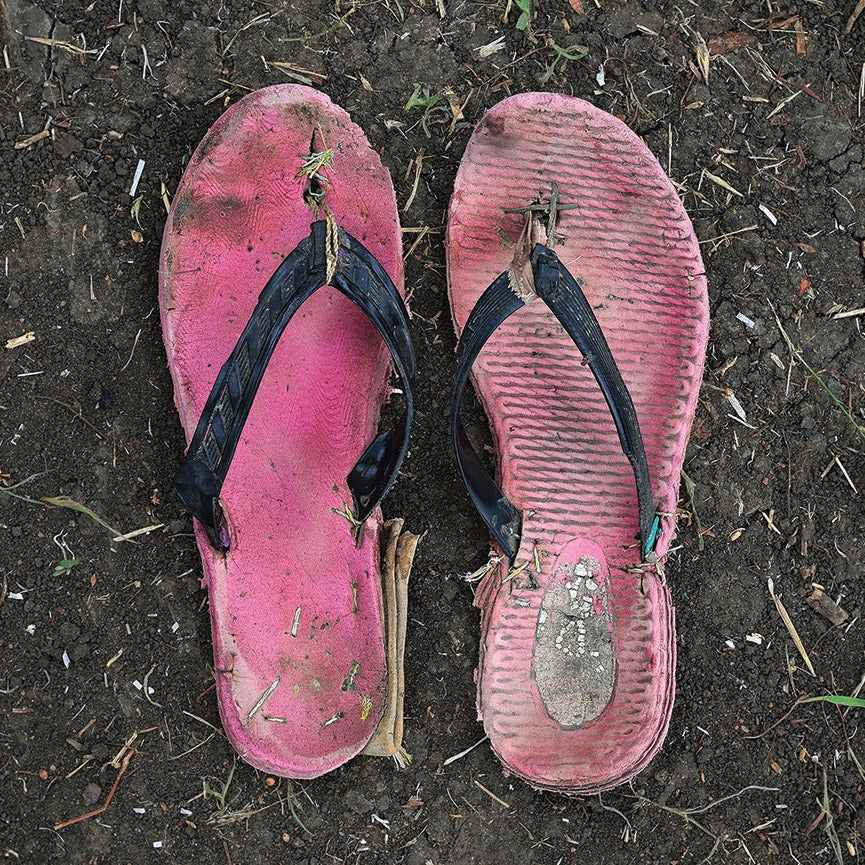 The sandals of Makka Bala, a woman in her thirties from Buk, who walked more than two weeks to reach the border after months of displacement in Blue Nile. 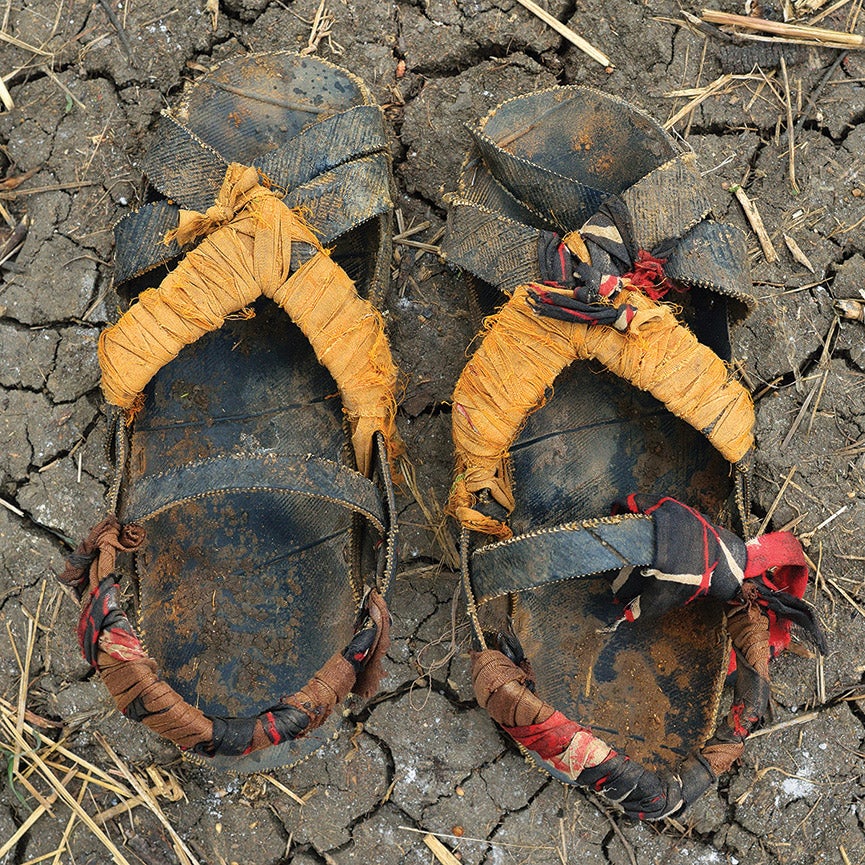 From A Long Walk, the sandals of Saddam Omar, 25, who walked for eight days from Pi.

For Shannon Jensen, work is a continual process of searching and striving. “I only want to be a photographer if I can produce substantive work that makes a small contribution—not just make a photo that’s five percent better than the one made by the person standing next to me,” explains Jensen, a self-taught photojournalist who is doing just that.

At age 29, Jensen’s worldwide documentation of such issues as poverty and displacement has shone a light on the human condition—as well as on her own talents. A featured photographer for Reportage by Getty Images, she has earned honors from Pictures of the Year International 2013, Amnesty International, the National Press Photographers Association, and Open Society as part of its prestigious 2014 Moving Walls exhibition.

None of this seemed likely when Jensen was an economics major on her way to law school at the University of Pennsylvania. She caught the photography bug during a summer postgraduate research fellowship on economic development in East Africa. She was tapped to photograph the work of an NGO, and the resulting images gained her acceptance into the 2009 Eddie Adams Workshop. “I don’t think I would be a photographer now if I hadn’t gotten into that workshop,” Jensen says, “because it was validation that I could become a photojournalist.”

She returned to East Africa in 2010, working in Kenya, Tanzania, and South Sudan. Small news assignments further confirmed her career choice. “I was finally feeling like a legitimate photojournalist,” she says, “when my father was diagnosed with brain cancer, so I returned to the States to help him.”

Back home near Washington, D.C., Jensen faced the same decision: law school or photojournalism? While deciding, she signed up for a Look3 Festival of the Photograph workshop led by Magnum shooter Christopher Anderson. With his encouragement, her workshop project—on the transition of a Charlottesville, Virginia, neighborhood, Southwood, from mobile homes to a mixed-income housing development—became a long-term series on six families.

“I’ve done a lot of low-income housing research at Penn, and the statistics show that most mixed-income developments aren’t successful,” she says. “My guess is that very few of these families will end up in the new homes, and I wanted to document that.” She does it with an empathetic eye, producing nuanced images that invite viewers into the scenes rather than slanting the narrative POV; she avoids wide-angle lenses and post-production tricks, and even her color palette is subdued.

In 2012 Jensen returned to South Sudan because she felt the refugee story there—more than 70,000 crammed into a camp in the Blue Nile State—was not being told. She arrived just as 30,000 South Sudanese were crossing the border. “It was almost biblical,” she says. “Endless streams of people coming through the woods.”

She produced documentary photos and sent them to editors, thinking she had a great story. Few were interested. She kept shooting. Watching the refugees stumble into camp, Jensen realized their footwear told the story: However worn-out, taped, or ragtag, the shoes were kept by the refugees as precious objects. She shot hundreds of pairs of shoes, most accompanied by captions with only the owners’ names, ages, and number of miles walked. “These images function as fiction does,” she says, “helping to create the human connection.”

Not resting long on the wide acclaim this series received, Jensen headed to South Korea. “I didn’t want to be the ‘Africa’ photographer,” she says. Now she’s learning Korean and figuring out how to tell the story of a country transitioning from a poor, agrarian, post-conflict economy into one of unprecedented rapid growth—but also suffering high rates of suicide, elder poverty, and consumer debt. “This is proving to be a difficult country to photograph in because people are so private,” she says. “But I am trusting that I will find something unique here.”

Lives In: London, but is currently on self-assignment in Seoul