Isadora Kosofsky Reveals the Intimate Lives of Her Subjects 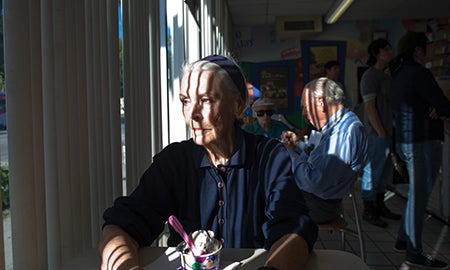 Isadora Kosofsky‘s approach to documentary photo projects involves total immersion. “It seems that I spend more time with my subjects than friends and family,” says the Los Angeles–based photographer. “Time and commitment are essential to earn and develop trust.” While she documents stories as an observer, she feels that the process is also one of self-discovery. “It’s important to show that you, too, are as vulnerable as the subject in front of your lens is. You have to accept that certain realities about yourself will show through in the project.”

Now 21, Kosofsky took up the camera as a teenager, not long after the death of her grandmother, who raised her. “I began to travel around Los Angeles to various retirement and nursing homes,” she recalls. “I found solace in photography as a way to alleviate loneliness—and my subjects feel less alone through our relationship and the creative process.”

Her time with elderly subjects led to her first major series,“The Three: Senior Love Triangle.” “I was photographing at an assisted-living facility,” she says. “As I watched Will and Adina drop Jeanie off at the gate, I related to her separation from them.” She befriended the trio and discovered that they relied on each other for emotional support, sharing an unorthodox intimacy while living in different facilities. The series earned her the 2012 Inge Morath Award, a grant from the Magnum Foundation to support the completion of a long-term project.

Kosofsky’s next series, “This Existence,” was even heavier, focusing on a pair named Rosie and Adam. “They were a couple for 20 years despite their 20-year age difference,” Kosofsky says. “When Rosie was diagnosed with cirrhosis of the liver, Adam became her primary caretaker.” Her series poignantly documents Rosie’s final days and Adam’s grief.

In striking contrast to her work on senior citizens, Kosofsky’s “Vinny and David: Life and Incarceration of a Family,” focuses on a pair of young brothers. “I was photographing in juvenile detention centers,” she says, “and I wanted to step outside the institutional setting and create a more personal story.” Her images of the troubled youngsters, one of whom is a father himself, reflect a blend of empathy and hard-time realism.

This project shifted both Kosofsky’s career path and her academic plans. Her self-imposed “Two Years Out” began abruptly. “I turned 18 the first week of attending university, the same time I received approval to photograph in certain domestic youth correctional facilities,” she says. “Around this time I met Vinny and David, and I couldn’t imagine returning to school when I felt that my life’s purpose was to tell their story. So I took off from school for two years to shoot. But I have recently returned to university [at UCLA], where I am a Gender Studies major.”

Kosofsky also recently completed the World Press Photo Joop Swart Masterclass in Amsterdam. “I’m shooting a project about developmentally disabled adults,” she says. “I identify with the emotional spectrum in the lives I choose to document.”