Mossless Magazine has come a long way since Romke Hoogwaerts started the project in 2009 as a Tumblr blog. Originally... 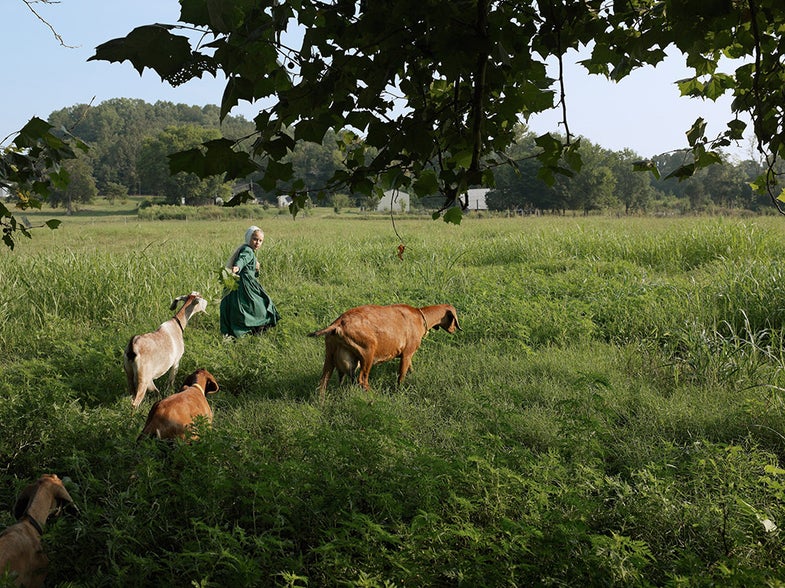 Mossless Magazine has come a long way since Romke Hoogwaerts started the project in 2009 as a Tumblr blog. Originally launched as a way to stay in touch with the photo community while living abroad, Hoogwaerts and his girlfriend Grace Leigh (who teamed up with Hoogwaerts in 2012) have since released three issues.

The third and most recent issue, The United States (2003-2013), came out last fall and features over 500 images from more than 100 photographers, and despite technically being a periodical, was recently named one of Time Magazine’s Photobooks of the Year.

As its name suggests, The United States’ scope is massive. Research for the project started over two years ago, with Leigh and Hoogwaerts scouring the Internet for work that documented life and landscape across all regions of the U.S.

“There is just an endless wealth of people and great photographs,” says Leigh. “I think this book could be made 200 times over with a completely new set of photographs.”

Leigh and Hoogwaerts spoke to American Photo about the cumbersome editing process and why the Internet is the best for photo curating.

Grace Leigh: The time frame is a really important one. It starts off, and as a country we are doing somewhat well, and then we go through the recession…

Romke Hoogwaerts: It is very much about this time that feels a little depressed, a lot of people in America felt tried and weary and in certain places, hopeless. Around 2003 this kind of photography really started to emerge and I think it is because of Alex Soth publishing Sleeping by the Mississippi. That is when that really sort of blew up. It is also around the time that the Internet and the photo communities really started to grow.

It ends at 2013 because we felt there is a sort of dramatic shift in our collective conscious about the state of being. The last year there has been a marked kind of social gravitas to getting over this stuff, getting past it. We are all of the sudden becoming very vigilant about the way that we treat each other and the way that the country treats us. It feels like this year could be a pivot year. It is a turning point in our culture really, multiple things are kind of bending into a new form. We wanted to find as many kind of moments and objects that represented this shift in some way.

The third issue of Mossless includes a huge number of photographs—over 500—what was the editing process like?

Hoogwaerts: Bookmarking started in 2012, maybe before that. I always knew that the third issue would kind of be the big one, and it needed some kind of totalizing subject that was very gripping, but was also politically charged in a human way. What better subject than America? It is the most compelling, historical lineage in photography. There is so much work that is coming out these days online by photographers who have recently studied photography, who don’t have necessarily a career, but have a shitload of talent and are taking incredible photographs of the land.

Looking at all those websites, whenever we found something we would write down the photographs that we thought would be compelling for the anthology. As we went through more we had in our mind the other ones that we had already categorized. We did this editing process in this hypothetical brain space and eventually we just requested as much as we could.

Leigh: We were interested in finding work based on the image quality, not on the name of the photographer. We printed out thousands of images and lined them up on this big empty wall in our old loft apartment space. For days on end we would wake up, we would go into the living room we would sit and stare at this wall and rearrange things. I think it took us like three weeks of just staring at this wall to finally get to a place where we felt we could start doing it on the computer— it was kind of an endless amount of tweaking.

Tell me about the layout of the book? What was important about sequencing?

Leigh: We wanted to have it follow a kind of road trip. It starts in the desert and goes through really kind of rural areas and ends in the city. That was kind of our concept for it with these broken up features with individual photographers—people who would kind of fall into the sequence, but were also kind of meant to be a little bit of a standout moment, like a special attraction.

Hoogwaerts: We grouped things by their lifestyle and their environment really, we feel like that is really where the differences take place, it is what you are around that defines the life you are having in a sense. There is far more rural then there is city. We wanted to reflect in a certain soft way the actual geography of the country. There is a lot of rural and outsiders, like Morgan Ashcom’s skaters in “Skatetopia” or Lucas Foglia’s farmers—people who live off the grid.

Almost all of this work was discovered online, how is your approach to curating for Mossless different than most publishers?

Hoogwaerts: Most publishers are not only hesitant to publish things that have already been online, they blacklist it. That is considered ‘already been published’ and in the publishing world that is a no no. We wanted to embrace the opposite of that.

Leigh: There was this sense of urgency around this work because we would be seeing it and it was so good. Then it would just fade away into the background of Tumblr, get buried under other posts. We wanted to give it a place to live and have some pertinence.

Hoogwaerts: It was also about unifying a lot of these different voices. There is this kind of zeitgeist in the art world that every creator is solitary and shouldn’t mingle with others. Collaboration is usually done in a really strange way that it doesn’t actually mix purely. It is just kind of mashed together, it is rare to see things unifying, but sometimes photographs work so well with others. Photography is a frame and like with movies if you put a lot of frames together in the right way you can create a really beautiful landscape.

Are you paying the photographers whose work appears in Mossless?

Hoogwaerts: We are trying to figure out a new kind of formula for this. New publishers don’t need a big office. There is a lot that you can streamline, you don’t need as many employees, there is so much great software that can allow you to take on the roles of many creative aspects and actually do them well. All of this was just done by Grace and I, other than the photography and the printing. Because we work from home, we don’t have an office and we don’t have employees, so the way that we generate income is different. It would be unfair for us to hog everything and it would be unfair for us to ignore that there is an opportunity for photographers to get a paycheck. There are too many publishers out there that work on an exposure basis and it’s exploitative. Obviously we can’t pay enough to pay their rent, but it is something. We are cutting 25 percent out and dividing it by photograph count. It’s not by size or name recognition, it is just by how many photographs you have in the book.

Most of the photographers whose work is published in The United States aren’t big names—was that an important consideration for the two of you?

Hoogwaerts: The primary thing for us was the photographs and that they shared their work online, so anybody who was doing that and creating good work counted. If it is great and it is out there, share it. That is how we see it.

Working on a book this size with your significant other seems like it could come with a unique set of headaches, how do you think Mossless has affected your relationship?

Leigh: We are always working, which has its ups and downs, but it is nice too because we can satisfy our own creative needs while still being together and being present with each other. It is kind of hard to say because it’s always been this way together.

Hoogwaerts: It has, I would say, amplified it. Since we moved in together if we have a difference of opinion we confront it and we work through it, even if it is hard, we go through it. After a while you understand each other in such a deep way. It is the same for making these photobooks. If we have a difference of opinion we just discuss why and we try to come to an understanding. I think one thing that is so beneficial with having such a close partner is you are willing to go through the battle. If I had just a friend as a collaborator and I had this problem with them multiple times, at a certain point I would be like, “get out of here, I’m going to do this alone,” but you can’t do that when you are with someone and that is a good thing. It is hard, but it is great.