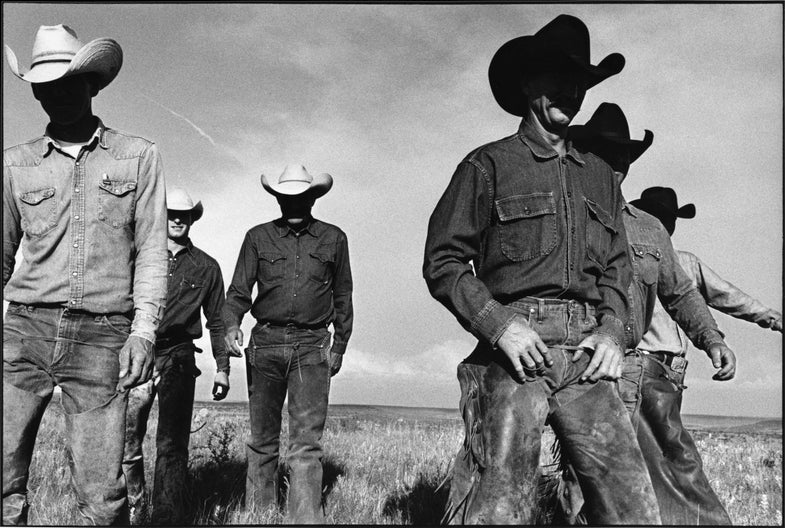 The title of Laura Wilson’s new book and exhibition, That Day, signals that the project is a series of moments in time. Subtitled “Pictures of the American West,” this work could also be called That Place. “I photograph all over, but this particular body of work has all been done in the American West in the last 35 years,” says Wilson, a Dallas, TX-based photographer who has published four previous books, including the 2003 volume Avedon at Work—which documents time that Wilson spent assisting the master photographer on his In the American West project.

This collection is tied together by its geographic theme. How did it come about?

The department of cultural southwestern studies at SMU came to me and said, ‘We would like to do a book with you on The West.’ So I went through the archives and gave a number images to the very worthy art director, Greg Wakabayashi, and he formed the book.

And there’s the exhibition at the Amon Carter Center through Valentine’s Day, right?

Yes, Amon Carter thought it would be a good idea do something, and that’s how it happened to be both a book and a show. It wasn’t my idea. But it’s a very nice thing to have happen, that someone comes to you with a book idea and then proceeds to put it in a major museum. It’s been a wonderful project in that way.

You worked with Richard Avedon on his In the American West series. Were you photographing or just assisting?

I assisted him. He didn’t know about The West, so he came to me, and I was a young photographer at the time. So I was very appreciative to have the opportunity to work with him. That was his heyday, in the late ’70s, so it was a fantastic chance to see someone at the height of his career, his fame certainly. Someone not only at the top of my field but whose work I particularly admired.

So did you learn to be mean to people too?

No. [laughs] I learned to be obsessed by my own vision. That was the biggest thing I learned from Avedon. He was not mean. He was exacting and demanding—most of all to himself—but I got along perfectly with him for the six years that I worked directly for him. And I learned that it takes complete focus: There are lots of talented people, but it’s also a sense of purpose and focus that one needs. And that’s what Dick had in spades.

A lot of the images in this book were done on assignment. Were many shot as personal projects?

Yeah. I haven’t gone through to count up and compare but, the pit-bull dogs, the cock-fighting, the work along the [Mexican-American] border, those were all things that I became interested in and had to do. I wasn’t doing them just to publish them; it was something that concerned me and interested me.

I think that, perhaps, the book that Avedon did in the American West was a bit one-dimensional. The West is so very amazing. In the creativity of people like Ed Ruscha, or Sam Shepard, or Jim Harrison. And they are very particular; it is a Western thing. They didn’t grow up where I grew up, in New England. You feel that in their observations. I don’t mean to say that they are limited to The West, but you know that they came out of The West.

So you grew up in Cape Cod and you live in Dallas. A transplanted Texan?

I’ve lived in Texas all my professional life, essentially. When I finished school I married and came here. But where I grew up is imprinted in me. It’s a very particular region. So when I came to Texas—not so much in Dallas or in Houston, but out in the rural part of the state—you know you’re not in Cape Cod anymore [laughs]. So that interests me, the particularity of place.

The anecdotes enhance the book and add to the narrative.

When I actually first spoke to Greg Wakabayashi, I said, ‘Maybe I don’t have a book here, because of all these different series of pictures.’ And he said, ‘No, that’s a strength of the book; it’s going to be a collection of short stories.’ And it made the project very interesting to do.

Along with the portraits here, there’s a documentary streak going on.

Yeah, I still love the work of post-WWII Capa, Cartier-Bresson, August Sander. I said in the Afterword of this book that I feel that the conceptual and the abstract can be rendered more fully and in a more interesting way by painting or writing. And in my observations of photography, it’s grounded in reality. The great strength of photography, to me, is what you do with that reality that’s in front of you.

That Day: Laura Wilson will be on view at the Amon Carter Museum of American Art through Feb. 14, 2016