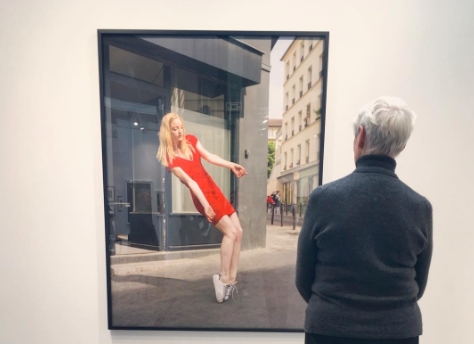 The 20th annual Paris Photo kicked off yesterday in The Grand Palais with 151 Galleries and 27 phonebook publishers from around the world. The fair is one of the biggest photography events of the year—and as you may remember was canceled last year in the aftermath of the Paris terror attacks.

This year, despite the shocking results of the U.S. presidential elections, things are going well in Paris. This weekend we’ve handed our Instagram account over to photographer Naomi Harris to show us around. Follow along at @americanphotomag. Here Harris speaks with us about her impressions of the fair so far.

How many times have you been to Pa ris Photo?

This is my fourth of fifth time coming, I was here last year and only managed to go to the fair for about three hours and then the attacks occurred. It was certainly a strange feeling to be here. It's strange this year too having learned about the new president elect from the pilot. That was strange news to be woken up to.

What brings you to Paris Photo this year?

I've been working on a new book called EUSA and I'm trying to meet with publishers to shop it around. For me, these festivals are more about the off shoot book fairs like Polycopi and Off Print than the main fair itself. And the social aspect of meeting up with people. It's nice to see the gallery booths too, to see what is happening now, but frankly so much of it is vintage work. Gallerists are here to sell so it’s not really a good place for photographers to try to speak to people about their own work but it is good to get a sense of whether a gallery might be a good fit to reach out to later.

It was also my mum’s 77th birthday, so I brought her along for a jaunt.

How does the fair seem this year compared to other years that you’ve attend?

Well for obvious reasons I can't comment on last year. It does seem larger than ever with great attendance. I think exhibitors are eager to out perform considering a lot of them are trying to recoup their losses from last year. The first time I came was maybe 10 years ago and it took place in the basement of the Louvre. Now it's in this spectacular and airy hall. The old place was claustrophobic and hard to see art so this is a lovely improvement. And there are so many more book stands. I think the first time I came there were maybe 10 with just the heavy hitters like TASCHEN and Steidl.

Are there any specific things that you keep an eye out for at Paris Photo?

Books, books and books! I purposely packed an extra bag to be able to bring some gems home.