The photographer on thinking abstractly and shooting with a loose wrist 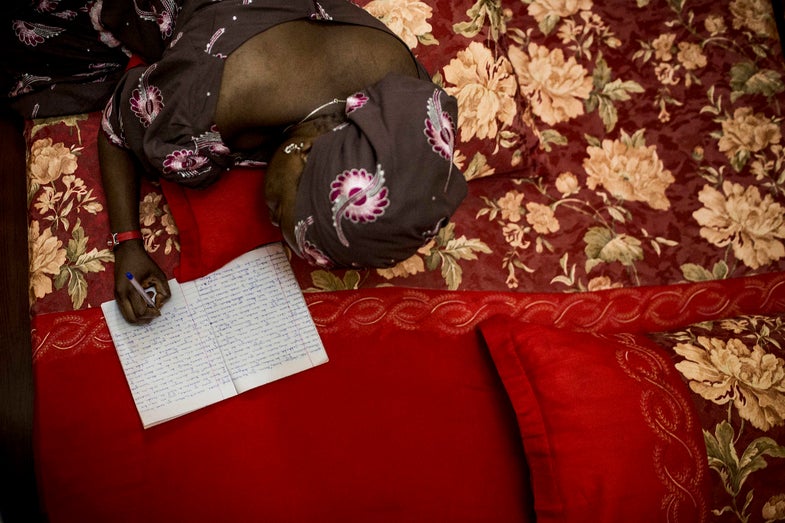 Hadiza Sani Garba writes her novels in bed or in her sitting room, by hand, in small composition books. © Glenna Gordon
SHARE

Photojournalist Glenna Gordon has made a career of finding nuance within high-profile news assignments. Gordon has worked in Africa since 2006 and covered stories on topics as varied as decadent Nigerian weddings, the Ebola outbreak and the hundreds of schoolgirls kidnapped by Boko Haram. In the midst of covering some of the biggest news stories of the last few years Gordon found an unexpected community of female romance writers living in Northern Nigeria who sell their novels in the very same marketplaces targeted by Boko Haram.

The devout Muslim women write their novels by hand in small composition books, which are then transcribed, mimeographed and assembled. Thousands of copies of the novels are then distributed throughout the Sahel region of Africa. The tone of the novels varies widely: some speak out against common practices of child marriage and human trafficking, while others offer readers advice on how to be a good, obedient wife. Some simply offer fantasies of escapism typically found in the romance genre. The Hisbah, who Gordon describes as the morality police, control the publication of the novels and have been known to burn books if they find anything that runs counter to the community’ high-minded standards. Gordon documents this surprising subculture in her new book, Diagram of the Heart, which was published this month by Brooklyn’s Red Hook Editions.

Here, Gordon speaks with American Photo about thinking abstractly and learning to shoot with a looser wrist in order to tell the story of these Northern Nigerian women.

This region of Northern Nigeria is most well-known for Boko Haram, were you surprised to learn about this subculture of female romance novelists?

It certainly was not part of my preconceived notion of Northern Nigeria. I think that was what made me so excited about it. I didn’t expect it. I don’t want to be like “I discovered this group”—I didn’t discover anything. They were already there—I just learned about them. There are things that we know exist in different places of the world, and there are things that we’ve never heard of. I’m definitely most excited about the things that I’ve never heard of.

From the excerpts that are included within Diagram of the Heart these romance novels really seem to run the gamut in terms of content—some are very critical, even political, of practices like childhood marriage, while others are more focused on how to be a good wife to your husband. What exactly is at stake for these female writers if the Hisbah find something within a novel that is considered immoral?

The Hisbah, who are basically the morality police, censor the books in a haphazard way. Some people get away with a lot and some people get away with less. In 2007 the state government burned a bunch of books in a very big public display of pomp, saying that the books were too racy and were not acceptable throughout the culture. Then the morality police really cracked down, made everybody register and started controlling the equivalent of an ISBN number. If you wanted to publish a book you had to go with them. They’ve loosened up as time has passed, but they still do raids, where they are arresting prostitutes and young men who have unacceptable haircuts. It’s all very haphazard. I don’t think anyone has ever gone to jail for writing these books. They will be chastised. I think it becomes a self-censorship thing more than anything else.

In the intro you speak about how women in this region of the world aren’t really allowed to leave their homes and that you couldn’t either. That seems like a tricky obstacle to deal with as a documentary photographer—how did you deal with that restriction?

They are encouraged not to go out unnecessarily. It’s not as extreme as Saudi Arabia or Afghanistan, where you can’t leave the house without a male relative, but they are definitely encouraged to stay home. I obviously left the house to work, but every time you are doing something you are encountering some degree of risk. It started from Carmen [McCain], she gave me a couple of phone numbers. I got to Kano and I called them up and I asked them if I could come meet with them at their houses. The ones who said yes I visited. With some of them we really hit it off and I met with them again and again, other people I just saw once or twice and they would recommend me to other friends. I sort of found them through networks that way.

At what point did you decide to stop shooting formal portraits of these women and start making more experimental images?

Pretty quickly. On my very first trip I just did the formal portraits and I sort of immediately knew that I was onto something that I wanted to work on for a while and dig my teeth into. I came back to New York a couple months later and started showing the work around and got the feedback that I should think more abstractly—more than literally about the authors or the police. What are the themes of these novels? What are these novels about? How can I make pictures that are about the same thing that these books are about?

One of the pieces of feedback that Alan Chin gave you was to “shoot with a looser wrist”—what does that mean to you?

It’s still something that I think I struggle with. I was a straight-A student in high school and did really well in school always. Then I got to journalism school and I didn’t do that well and it was really hard for me to accept. I couldn’t just study more hours if I wanted to do better. I had to do something else entirely. It wasn’t about making more flashcards or learning it one more time. It was about thinking about things differently, letting go a little bit more than pushing forward—you can’t just work harder to do it. That is always how I lived my life—I always tried so hard to succeed and push so hard, but suddenly I was doing something where pushing harder didn’t mean I got better. For me to stay interested in something and to want to do it for a while it has to challenge me and I have to find new and different challenges all the time. I think that is what I like about being a photographer. Obviously I can read more photo books or do more social media or whatever the ingredients might be, but that formula doesn’t ultimately make you take better pictures or interact with the world in a more meaningful way. I think shooting with a looser wrist is about letting go a little bit and seeing what is in front of you.

Was it difficult for you to work in this way?

It is something that I have to push myself towards. I think in some ways it is much easier for me to do the stuff that the newspapers like. I know what I need to do there, I know what I want, I know what my editor wants. Making this book was not about creating a picture that looks like something that somebody wants. It was about trying to shoot a totally different kind of picture. It is harder in that there is no formula and it’s not like I got up in the morning and I knew what I was supposed to do that day.

Some of my favorite images in the book have little imperfections in them and seem like the types of photos that wouldn’t make the cut if you were shooting for a daily: the exposure is a bit off, a horizon isn’t quite straight or a face isn’t perfectly in focus—were those decisions made in your edit or while you were shooting?

A little bit of both, when I was shooting I was definitely trying to not just do newspaper pictures. I would say on the first trip I made a pretty conscious effort to make a pretty traditional photo project, but very quickly I knew I wanted to do something else. By the second and third trips I had this idea that I wanted to do something abstract, but I still didn’t totally know what that meant. As soon as you start thinking that you are not trying to make the newspaper image it gives you some space to make a totally different kind of image. A lot of it does happen in the editing. Editing is everything. In some ways taking pictures is like collecting and you just want to have a lot of things in the box to choose from later.

It seems like the photograph of Rabi eating a piece of melon falls into that category, can you speak a bit about the experience of shooting that portrait?

That picture I took maybe on my second day in Kano. Rabi was one of the first people that I met and that was maybe the first time I met her. I was so excited to be there. I wanted to go to a wedding, she was going to a wedding and it felt like everything was totally perfect. I was taking pictures, but I was also having a really good time. My watermelon picture isn’t a classic perfect picture. I wasn’t thinking in that way. I was shooting with a loose wrist. That is a picture that happens because an experience happens. It looks the way it does because I wasn’t shooting very tight. I wasn’t trying to shoot for a newspaper—I was trying to eat some watermelon with my new friend.

Why was it important to go beyond traditional photojournalism for this project?

I think there is a very easy NGO version of this story, “women are writing their own stories,women’s voices are being heard.” I definitely did not want to do that. I feel like the NGO version takes away the individuality and takes away the creativity of those expressions. Some of these books are super political and advocate against child marriage, but some of them are not. Some of them are like be a good wife and accept it when your husband beats you. I wanted something more true to life, to the variety that you would see. I feel like people want an Africa Rising story or a sob story and I kind of didn’t want to give you either. I think part of the process of making this book was about finding a way out of that, the confines of working for a daily, where the best possible result is a picture on the front page and 12 picture slideshow. I want more than that. I wanted there to be more breathing space than that. I wanted readers to walk away with a better idea of what a place looks like and what a life feels like.