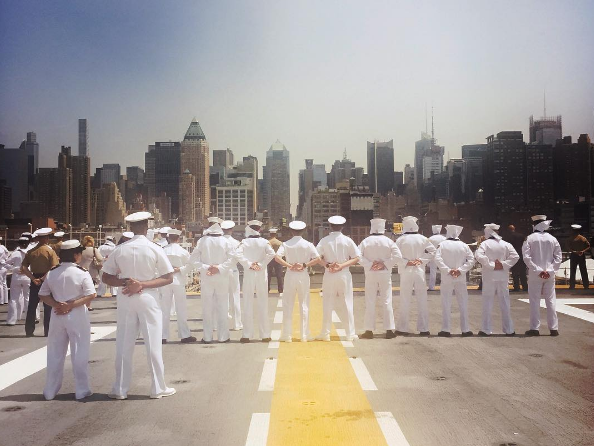 Instagram has become an integral element of most photographer’s workflows. It’s an effective way to promote work and get a global audience. It’s also becoming a lot more common for photographers to be discovered through the platform.

This year, to celebrate Memorial Day weekend and Fleet Week, the U.S. Marine Corps decided to utilize Instagram to give civilians a behind-the-scenes look at what life is like as a crew member on the USS Bataan—which is currently docked in New York. The U.S Marine Corps embedded four photographers onboard the ship to document via Instagram: Anastasia Taylor-Lind, Pablo Unzueta, Anthony B. Geathers and Balazs Gardi.

“This opportunity was so exciting because it cut out the gatekeepers of legacy media,” says Taylor-Lind of the experience shooting and posting directly to Instagram during her embed. “Further democratizing photojournalism, by allowing photographers without a traditional assignment to access an embed usually reserved for those working for a magazine or newspaper.”

Taylor-Lind says she was struck by how young many of the Bataan’s crew members were—the average age of those in the Marine Corps is only 21—but enjoyed that so many of the subjects she shot on board are active users of Instagram.

“For years many of the people I photographed didn’t have access to the media I worked for, and as a result didn’t sees their images published,” she explains.

Unzueta, who is also 21, said that realizing most of the Marines on board were his same age was eye opening.

“My main concern was photographing on an intimate level,” he says. “I felt like I was thrown into the situation, which made it difficult to gain access and trust in a two-day span.”

For Geathers, who served in the Marine Corps and had two deployments to Afghanistan, shooting on the Bataan felt a bit like a reunion. He says his military background made it easier for him to break the ice and talk casually with the Marines on board. During the embed Geathers says there were details that he knew he wanted to capture on the ship.

“There were plenty of moments I photographed that I remember from my time as an infantryman,” he says. “For example, playing Spades, the number one card game in the infantry.”

Although the ship has docked the four photographers will continue to document what these infantry members are doing through the weekend: the demonstrations to the public, a 5K run to the World Trade Center and, of course, service members enjoying the entertainment the city has to offer.

“The most immediate decision I have to make is to chose between experiencing a jet assisted take off with a Blue Angels C-130 and zero gravity or attend a re-enlistment ceremony at The National 9/11 Memorial,” says Balazs Gardi.

Follow along on Instagram as these four photographers continue to document through the perspective of these service members.