Revisiting the roots of the #jumpshot 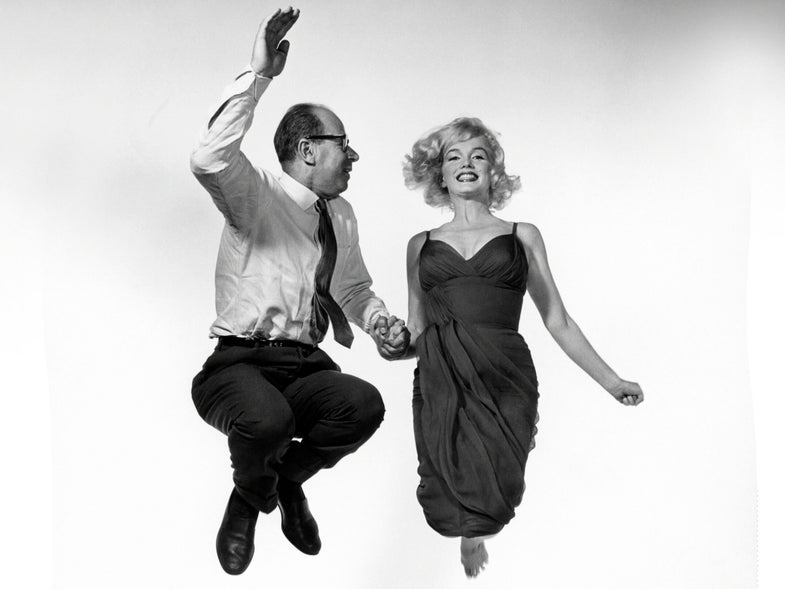 Long before wedding photographers were asking their bridal parties to “jump” or #jumpshot had acquired over 100,000 posts on Instagram, Philippe Halsman was getting midair portraits of some of most important people of the 20th century with his Rolleiflex camera, a technique he called Jumpology.

“I recognized that jumps had a therapeutic value,” Halsman wrote of his photographic technique. “When my sitters were self-conscious and tense, I asked them to jump. The mask fell. They became less inhabited, more relaxed—i.e. more photogenic.”

For a period of six years in the mid-’50s whenever Halsman was commissioned to photograph someone he would inevitably ask them to jump. Over that time period he managed to capture airborne portraits of political figures like Richard Nixon, industry leaders like the members of the Ford family, Hollywood starlets like Grace Kelly and Marilyn Monroe and New York nightlife photographer WeeGee. 197 of these playful portraits were published in his 1959 book, Philippe Halsman’s Jump Book, alongside an essay about the science of “Jumpology”—a term coined by Halsman. The book is being reissued by Damiani this November.

Scroll through any social media feed and it is clear that the “Jump Shot” remains a huge trend in photography today. The in-depth and humorous essay written by Halsman about the science of “Jumpology” that accompanies the pictures sheds plenty of light on what the photographer learned throughout this project

There Are Two Types Of Jumpers: “Jumping humanity can be divided into two categories: one which tries to jump as high as possible and one which doesn’t care. The ones who try hard have ambition, drive and the desire to impress others. The ones who don’t care either don’t take the jump seriously or lack ambition.”

Props Can Be Fun: Although many of Halsman’s jumpers simply flung themselves into the air occasionally his subjects would ask for a prop. William Holden jumped over a cane, Maurice Evans asked for a jump rope and the ever-eccentric Dali jumped with his paint brush and pallet in hand, three cats thrown into the frame along with a bucket of water. It took Halsman 28 frames to nail the perfect jump shot for Dali’s Jumpology.

A Jump Can Reveal Eternal Youth: When Halsman asked the 87-year old Judge Learned Hand to jump, the esteemed judge asked the photographer, “Don’t you think this might kill me?” The Judge decided to jump anyway and although Halsman recalls the difficulty of focusing his Rollei while photographing the jump he recalled: “The picture of the jump makes me less fearful for my own old age. I hope it will mean to the judge what it means to me—a proof that the secret of eternal youth is in one’s spirit.”

Don’t Take A Refusal to Jump Personally: Halsman said it was rare to encounter a person who refused his request to jump, estimating only two percent of people he asked declined, but when it did it happen it was “heart-breaking.” Don’t take a refusal to jump personally though, and remember that there’s a science to Jumpology. “The refusal to jump is a symptom of an exaggerated fear of losing one’s dignity—one who has dignity cannot lose it in a jump. It reveals a hidden deep-seated insecurity,” Hallsman wrote in his essay.

Always Make Sure There is Ample Head Room: “One does not want the patient to hit the ceiling,” Halsman advised.