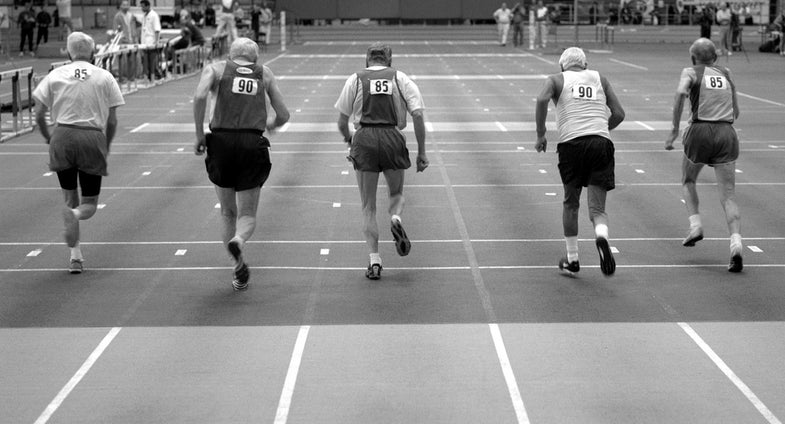 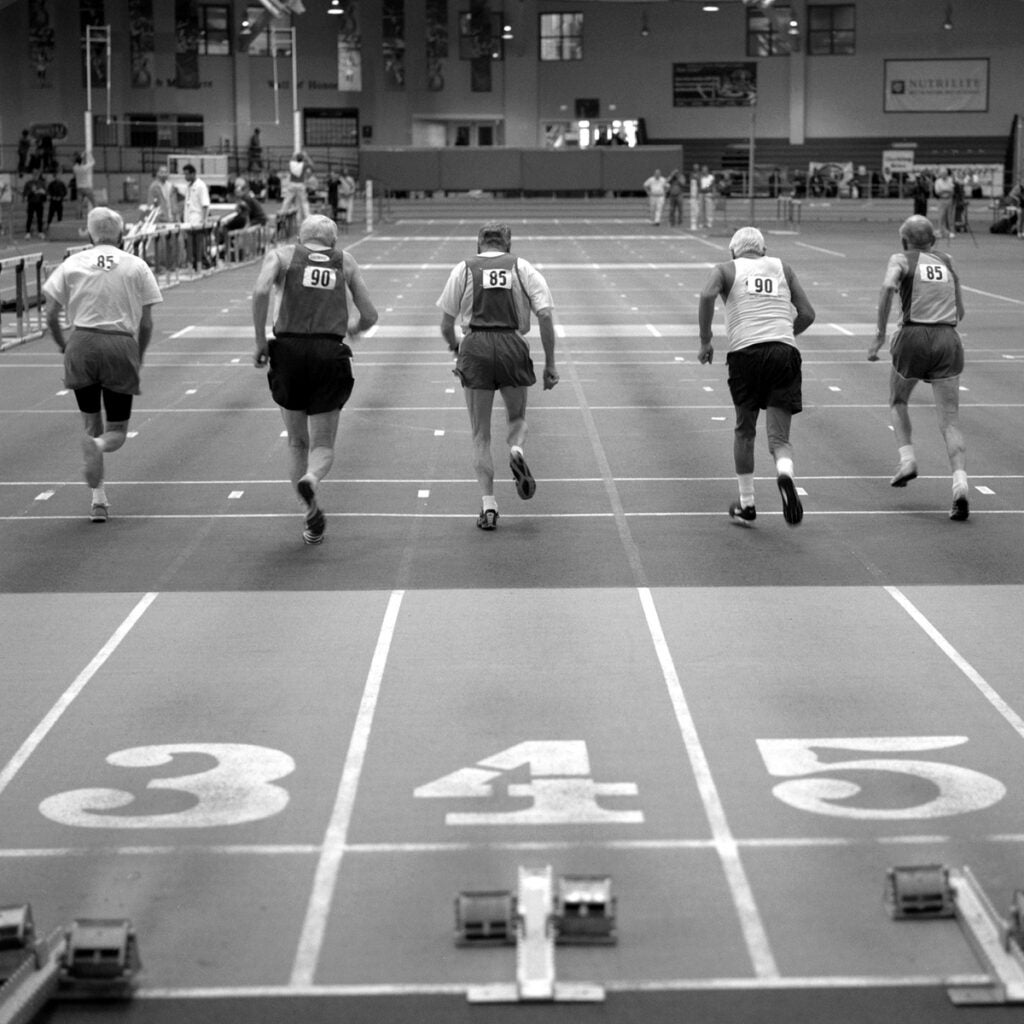 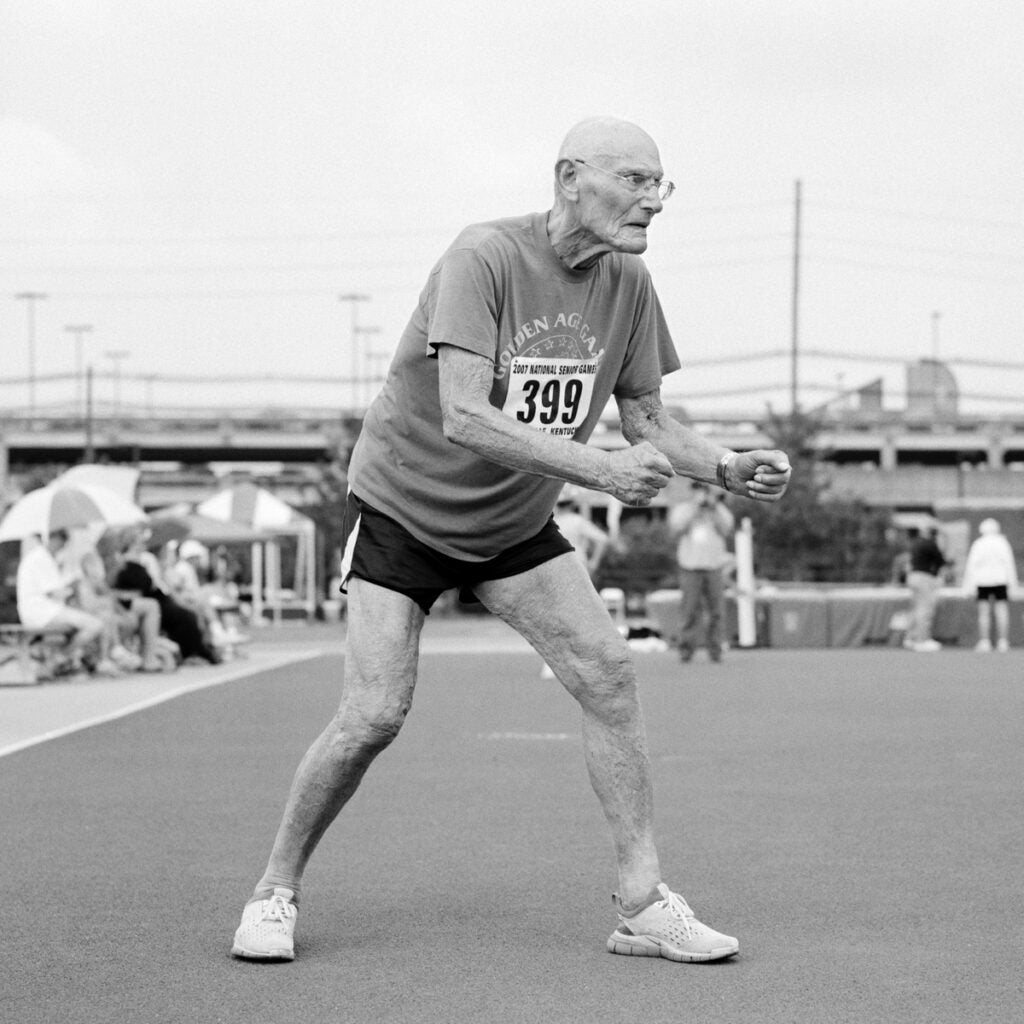 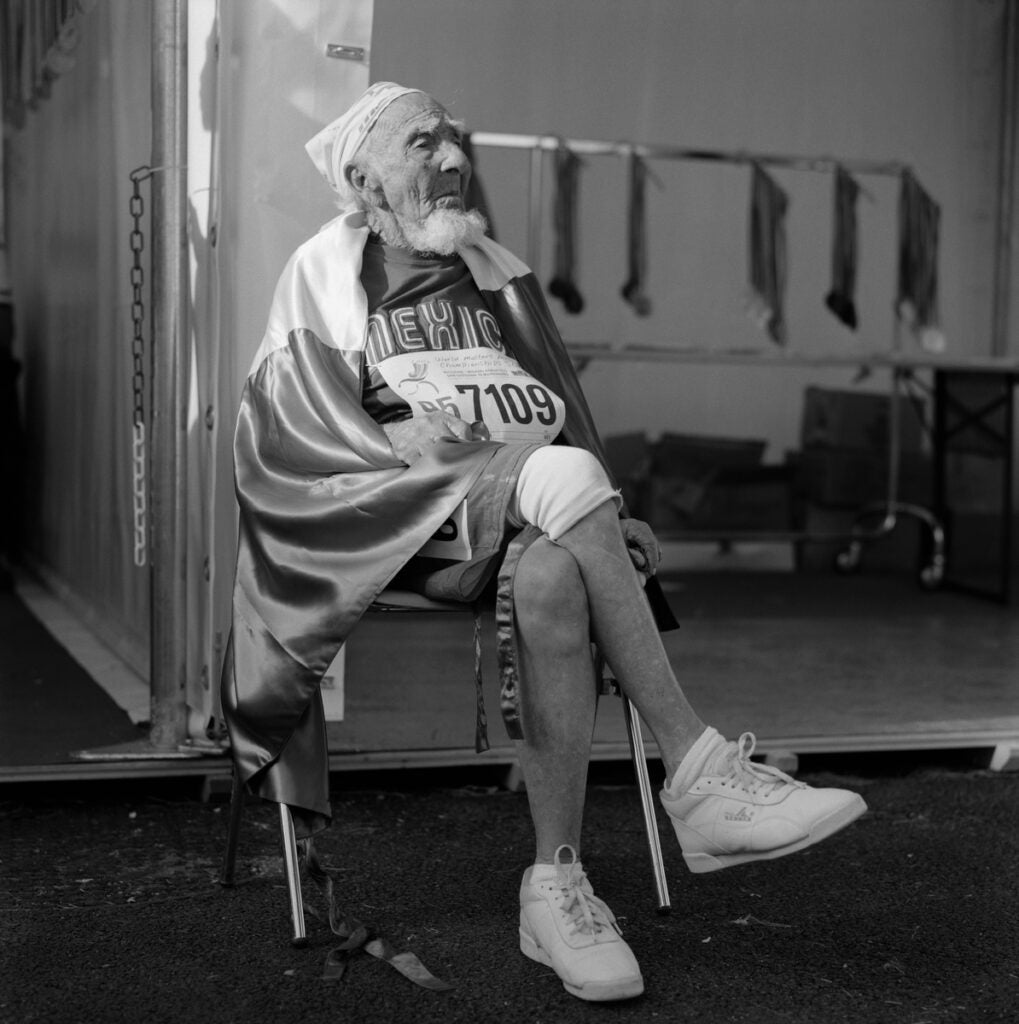 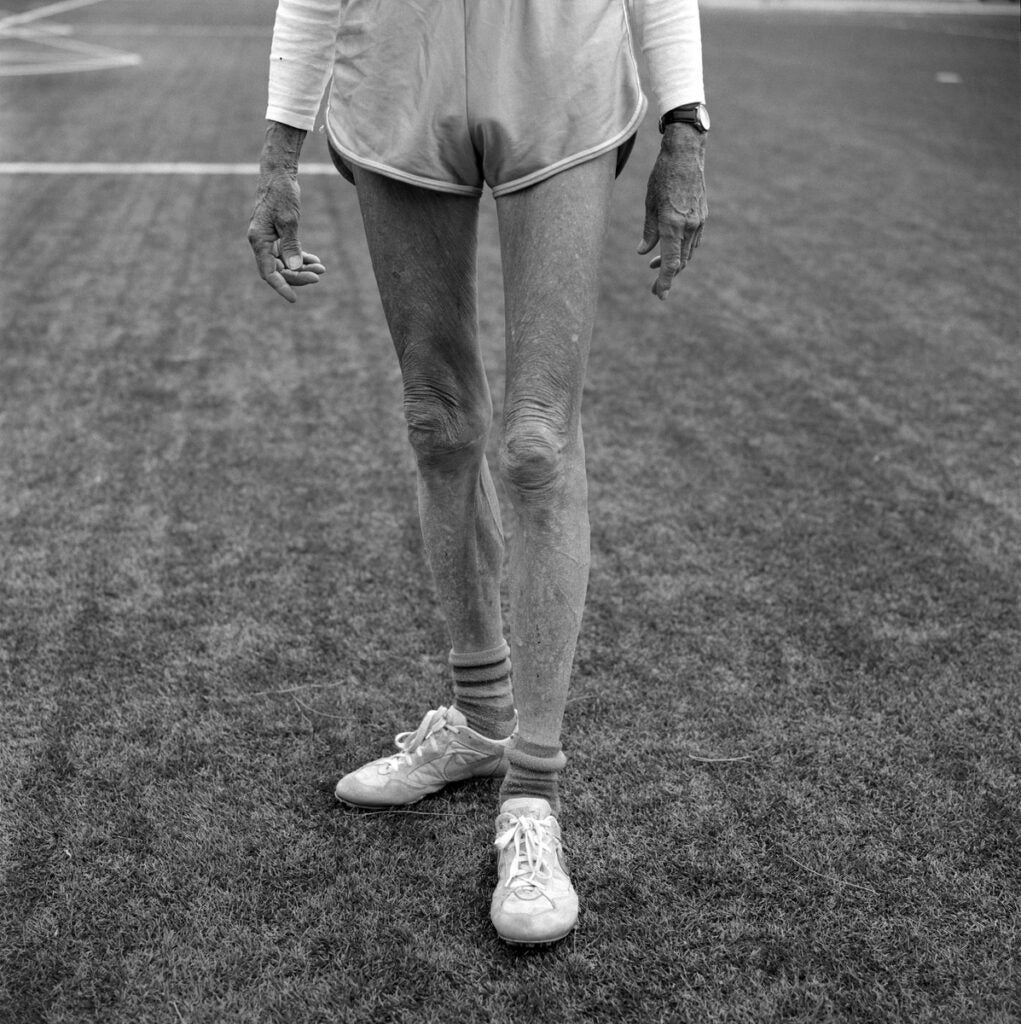 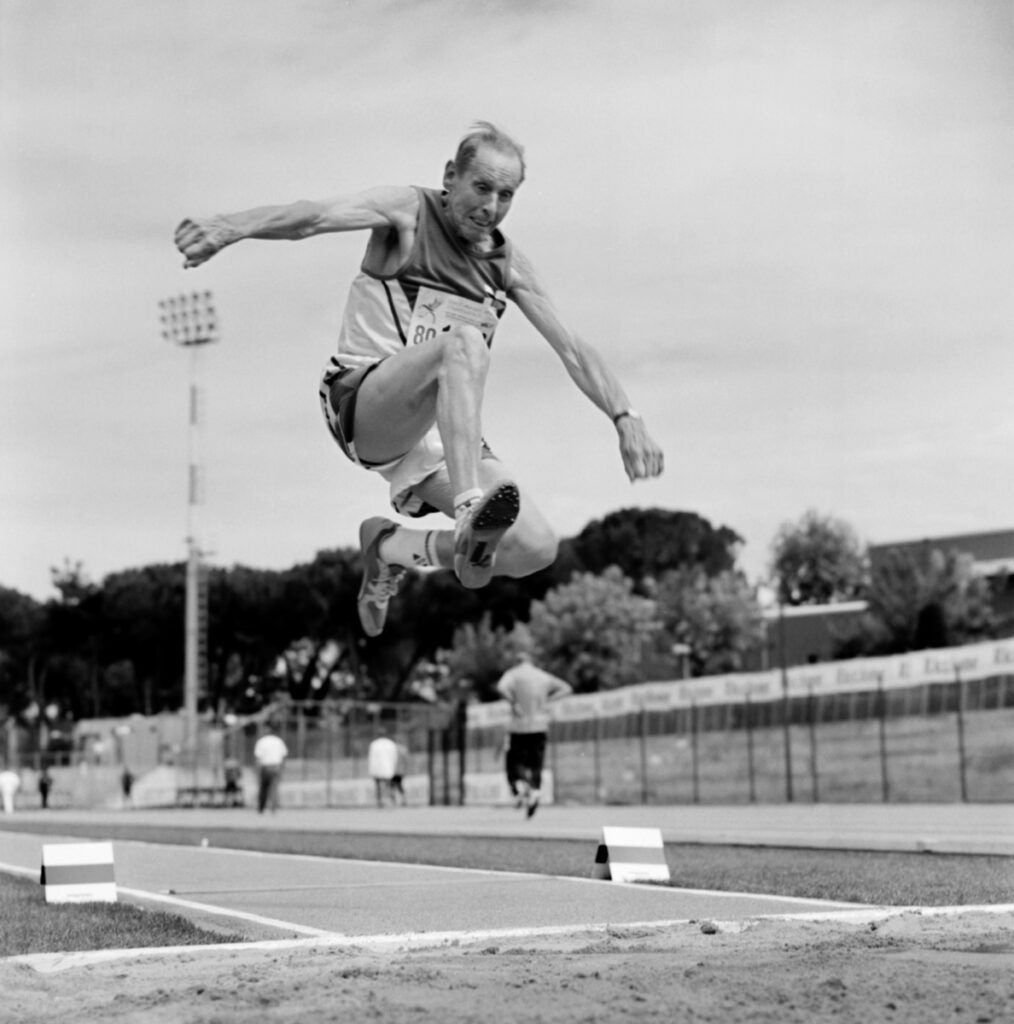 A documentary project, shot on medium format Hasselblad on black & white film, about the senior athletes competing in the masters track & field competition circuit in the United States and around the world. 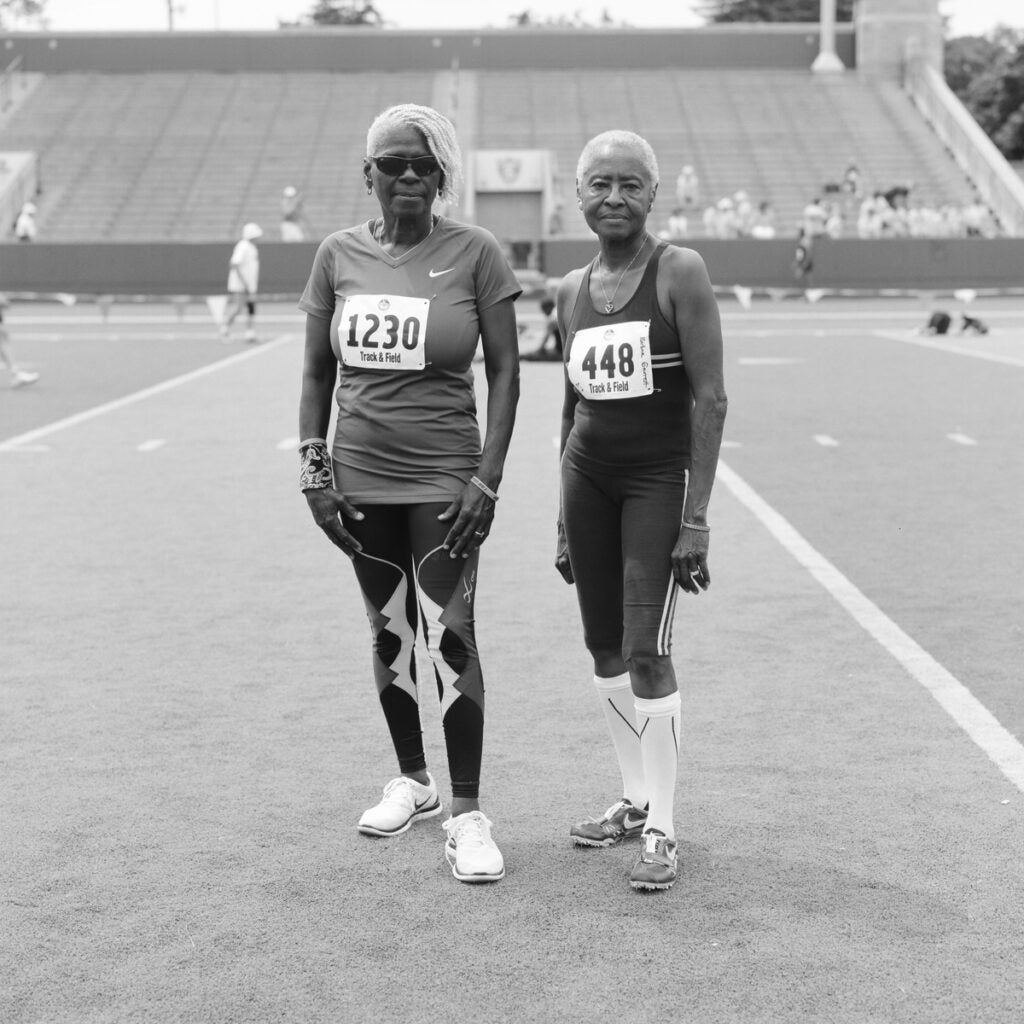 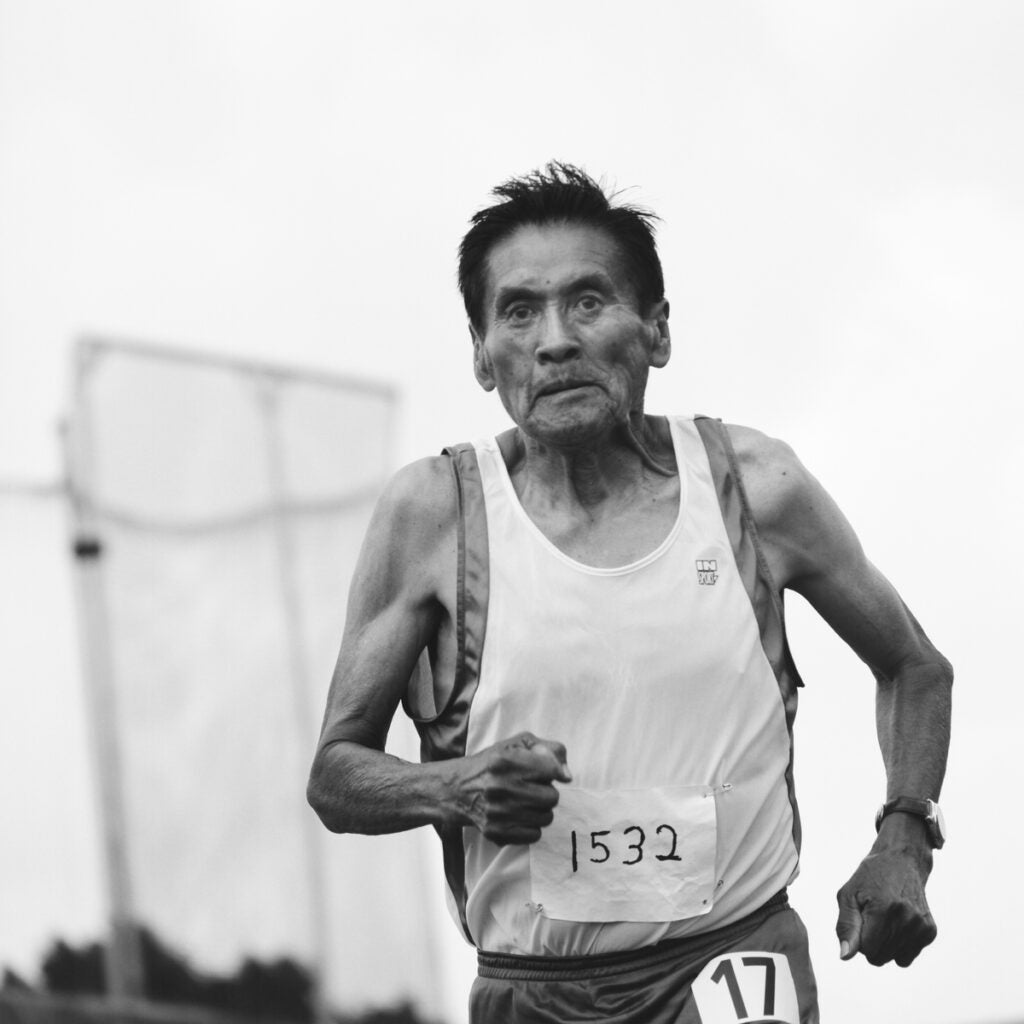 It was cliched depictions of the elderly that first got Angela Jimenez interested in photographing the Master’s Track and Field events, which only accept athletes between ages 30 and 100. In 2007, when she photographed her very first event in Kentucky she was working on a story about aggressive anti-aging treatments, which she admits was a bit disturbing.

There weren’t any feeble graying grannies in sight at that event though, nor were there any fair weather participants—what Jimenez found were fiercely competitive athletes who took their sports very seriously. “When I look at these older athletes, I don’t see them as representing the past,” Jimenez says. “They represent our future.”

Eight years later, after attending events around the globe, the photographer has turned to Kickstarter to raise funds to publish the work as a hardcover book.

Here, she talks about what sparked her interest and why shooting film was a good fit.

What was it about these aging athletes that was interesting to you?

I was a heptathlete in college, which is the multi event. The men do the decathlon, the women do the heptathlon. I loved the sport. Ten years later. I was a photojournalist, living in New York City, doing an assignment for the New York Times and I met a doctor who competed in this sport. I was just really curious about it. I borrowed my friend’s Hasselblad, borrowed someone’s car, and I went to Kentucky to check it out. I really wanted to see something different about aging. I really didn’t know what I was going to find, and I was really surprised by it. It was really authentic, the people were really athletes. They were very competitive, very focused, and it was a kind of shocking contrast to see that.

What was so shocking about it for you?

There was a real contrast between what I expected to see an older body doing and what they were doing. One of the first athletes I photographed was this guy name Seymour (slide two). He was high jumping and his family told me that he had several types of cancer at the time. He was competing with this intensity, obviously the bar was not very high, but what I tapped into was that this was a sport in the traditional sense. These people were not just doing this as a hobby. They were really training and they were serious about it.

I had competed as a young person and I’ve always loved sports, but I understood that it was about achieving the peak form of your body. I haven’t competed in a really serious way in anything since I was 22. To see an 85-year-old competing with that intensity, it was very mysterious to me. That was the thing that kept me going back.

As a former competitive athlete did you find yourself relating to these very elderly competitors?

I relate to communicating with your body and using your body as a way to have a sense of identity and health. Even after I stopped doing competitive sports, photography is very physical, I love to dance and I still do a lot of yoga. I’ve always loved the metaphor of the body, but the thing that I didn’t relate to was why someone would still be this competitive when they’re 95. How had they retained this intense sense of competition? That was the mystery of it. The athletes were really great characters, had wonderful faces and wrinkly legs and were very cute, that was cool, and that would have kept my interest for a week. It was the deeper thing of really starting to see them as athletes who were motivated by something that was different than what I understood as a young person. That is what has continued to keep me interested in the sub-culture—which is how I think of it.

You’ve been shooting since 2007, at what point did you decide that you should make a book of the work?

I shot this project very consistently from 2007 to 2010, and then I put it down. I wasn’t sure where to go with it. Last year I entered the work in Photoville and this series wound up winning a jury prize. I had a solo show in New York of the project as a result of that. It was that experience, the validation, that made me decide to pick it up again and really try to finish it and turn it into a book. I found it interesting that even among younger people, we want to see something other than these very simplistic images of older people, as either very cute or very vulnerable—those are paradigms.

Everything has been shot on a Hasselblad with film, why was analog a good fit for this project?

In the beginning I think that the choice of film was about slowing it down and getting back to the basics. I was shooting a really high volume of pictures and a high volume of assignments, and I wanted something that was really conscious. I wanted to make sure that I was really seeing what I was looking at. I felt like it was going to be compatible with the subject matter too. One of the things I think is beautiful about black and white film is how it depicts the human body and forms and skin tones. The fact that shutter speed is 500 and the film only has 12 frames to a roll—I felt like the metaphor that it was slow, and that it took more time, was really harmonious with the people and what they’re facing with their bodies. That really made sense. It’s hard to really do reportage with the Hasselblad, there’s no auto focus, it takes a lot longer to set everything up, but what I’m really trying to get at is the essence.

I’m usually standing next to someone who’s shooting with a motor drive. To me, they’re all tools. They’re doing something different and I’m doing something different. When that athlete jumps through the air, I get one shot and the person next to me sometimes takes 15. There’s a beauty to that. I believe that the result is also in the process. The way I am thinking about things or looking at things is a little different.

What do you think is the most important thing you learned from this project?

I think people think that I’m going to say that they really inspire me, and they do, but even though I’m a former track athlete, I probably am not ever going to do this. It’s more like they’ve reset my mind. In the time that I was working on the book, I watched my dad get Parkinson’s. My dad was not an athlete, but I watched him struggle with a movement disorder. There was part of me that was motivated by that—wanting to see an older body be able to move. I think it was healthy for me to literally re-envision something other than that. An older body doing really physically challenging things. You never know how long you’re going to have. You never know how your health is going to hold up. Even if I don’t ever do that sport, I take it as a really great example of what getting old could look like.