Maurine and Noreene never asked to be famous. The two identical twins lived their lives in sleepy Denison, Texas, sharing... 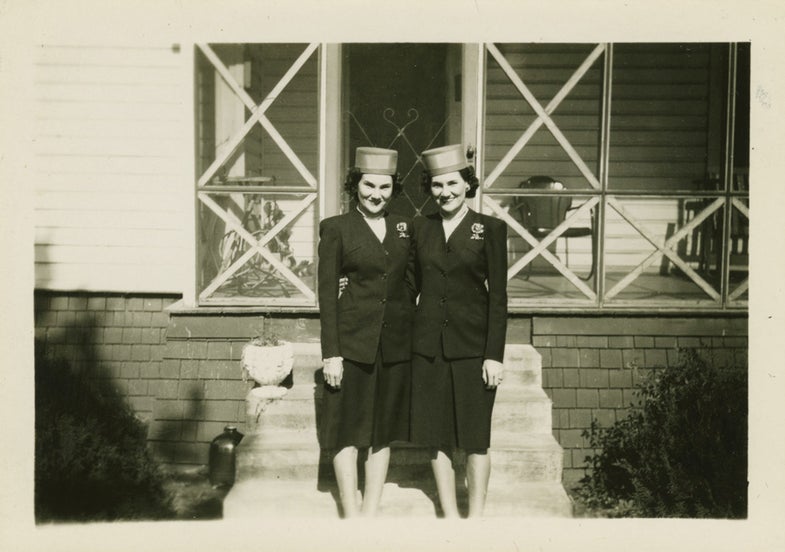 Maurine and Noreene never asked to be famous. The two identical twins lived their lives in sleepy Denison, Texas, sharing a strong affection for each other and for snazzy matching outfits. But thanks to the Internet and a remarkable series of snapshots, the pair has become a global phenomenon—trekking through the blogosphere from Flickr to Retro Renovation, from Italy’s La Repubblica website to a choice spot on New York magazine’s Approval Matrix.

The duo’s online odyssey took off in 2009 after New York City artist Roz Leibowitz bought a snapshot collection on eBay under the tag “TX Twin Sisters Dress Alike for 88 Years Photo Lot 100+.” She paid $21.25 for the set. “I like to collect artifacts in groups,” Leibowitz says. She posted 18 of the photos on a Flickr stream, sparking interest in the sisters’ identities. Marion Roach Smith blogged about them on the Sister Project: “What entranced me was the pride with which the twins showed off their matching outfits.” After reading about the pair in a story on Retro Renovation, Kevin Howard located them in an online yearbook from Denison. He discovered that Maurine Elizabeth Everett and her sister Noreene Dodd died within four months of each other around 2004, at ages 88 and 89, respectively. He also learned that their mother was a seamstress, which explained all the matching outfits.

A year later, Denison resident Gary Sewell wrote to the Sister Project that he had worked in the store that developed the twins’ pictures from 1971 to 1996. “They were identical almost,” he noted. “I could tell them apart but most people did not know the littlest difference in them.”

How did these pictures end up on eBay? “We acquired the photos and papers from an estate sale held by the twins’ last caregiver,” reveals dealer Darrell Holcomb, who with his wife runs a vintage website called Cemetarian in Sherman, Texas. “They had no living relatives to claim their estate that we know. At the sale we spotted a dirty, torn box with photos and papers on top. The man said, ‘That’s trash we haven’t disposed of yet.’ We made him an offer.”

Though they ultimately auctioned off the photos, the Holcombs were fascinated by the twins. “The girls were inseparable always, and one gets the feeling that Maurine lived vicariously through Noreene, who was the alpha of the two,” Holcomb says. “Noreene married twice but Maurine never married. In a newspaper article that we had it told about the girls ‘being’ each other when it was convenient. One even went for a job interview while the other one went on a date.” They must have been quite a pair. AP