"They were ostensibly reportage of the wars—but had none of the stink and smell and blood of war." 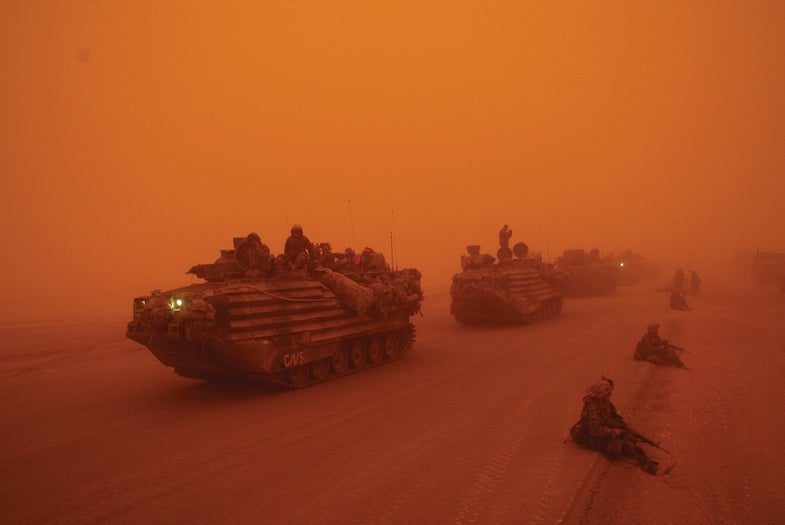 FILE -- A severe sandstorm blanketed a convoy from the Headquarters Battalion of the 1st Marine Division north of the Euphrates River in Iraq, on March 25, 2003. President Barack Obama announced Oct. 21, 2011, that the United States had fulfilled its commitment in Iraq and would bring all U.S. troops home by the end of the year. (Ozier Muhammad/The New York Times) EDS NOTE: PHOTO HAS ORANGE OVERCAST BECAUSE OF SAND STORM - DO NOT COLOR-CORRECT. OZIER MUHAMMAD
SHARE 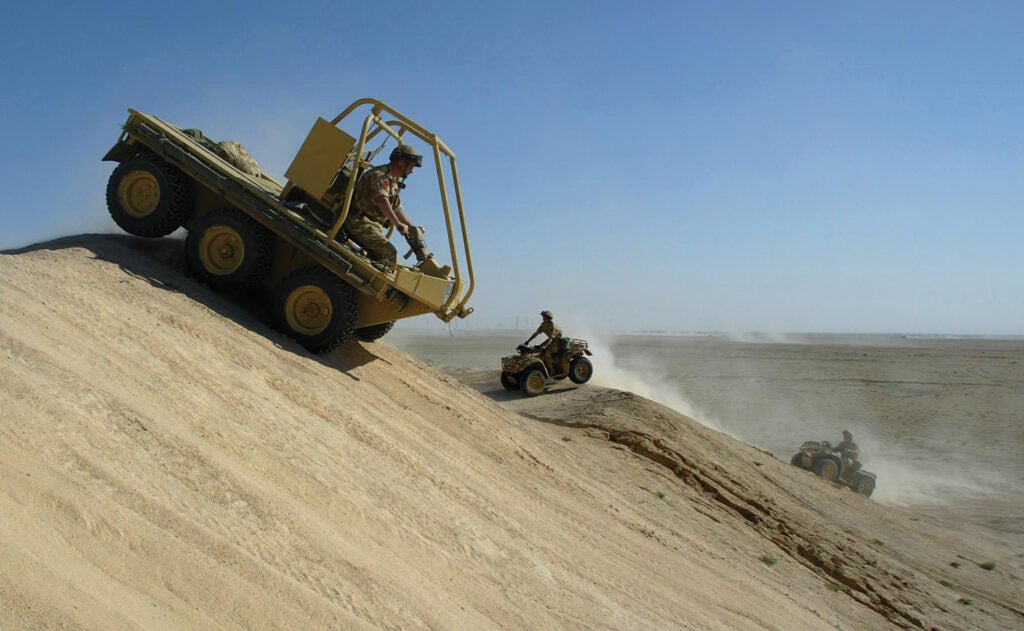 Soldiers from the 1st Battalion The Parachute Regiment practice driving all terrain vehicles in the Kuwaiti desert. From: War is Beautiful by David Shields, published by powerHouse Books. 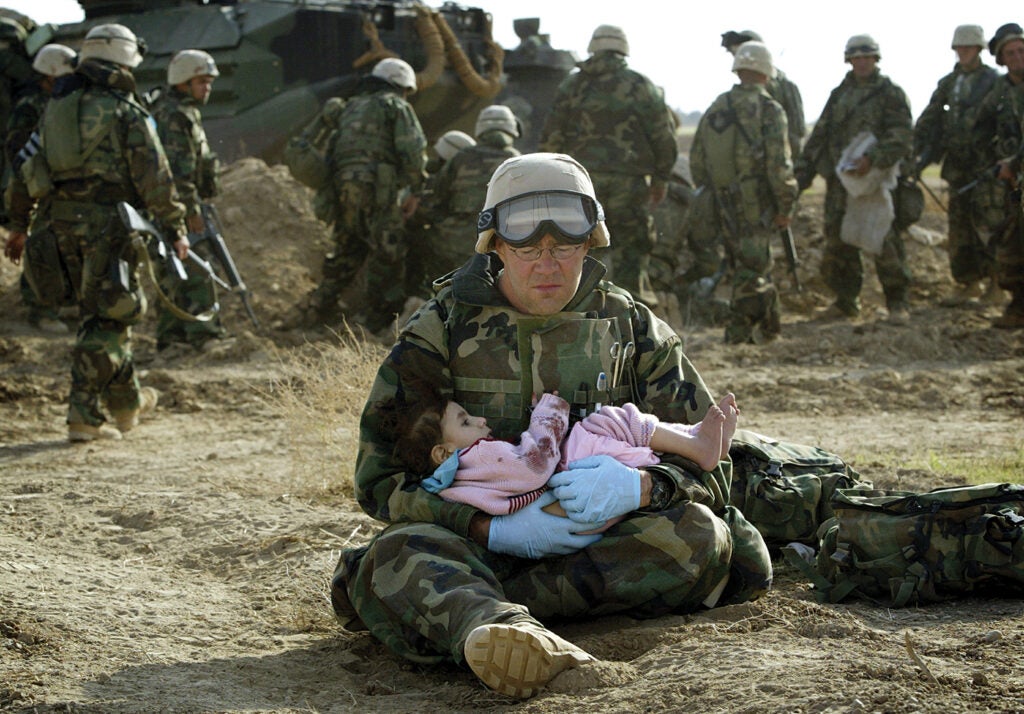 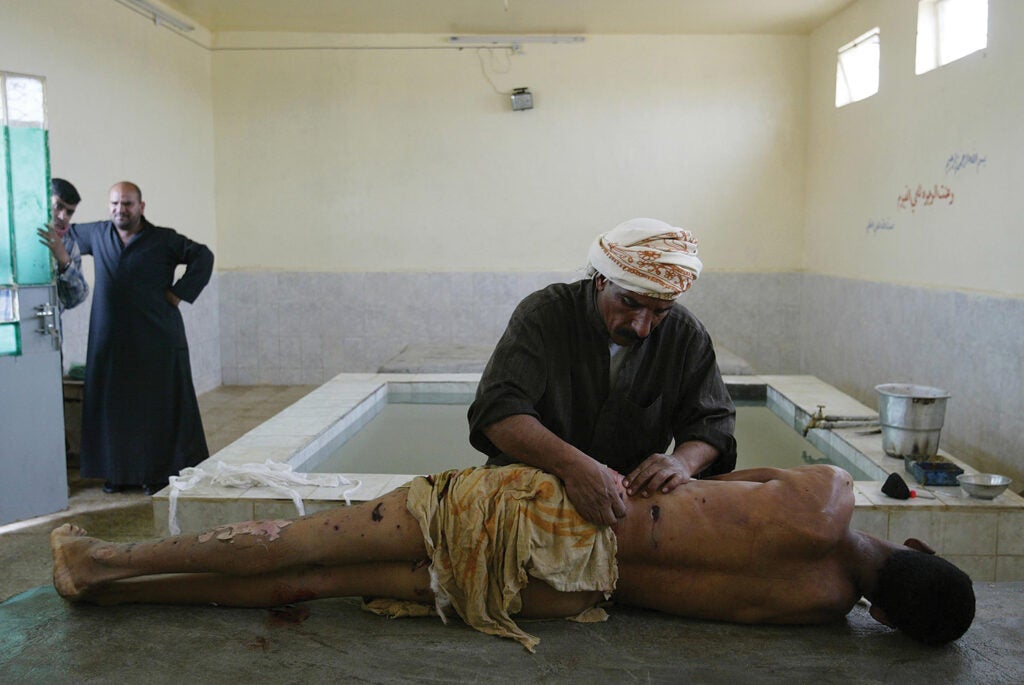 Ali Hadi, a professional body washer, prepares the body of a bombing victim for Muslim burial as the man’s relatives watch in Najaf, Iraq.

Ali Hadi, a professional body washer, prepares the body of a bombing victim for Muslim burial as the man’s relatives watch in Najaf, Iraq. From: War is Beautiful by David Shields, published by powerHouse Books. 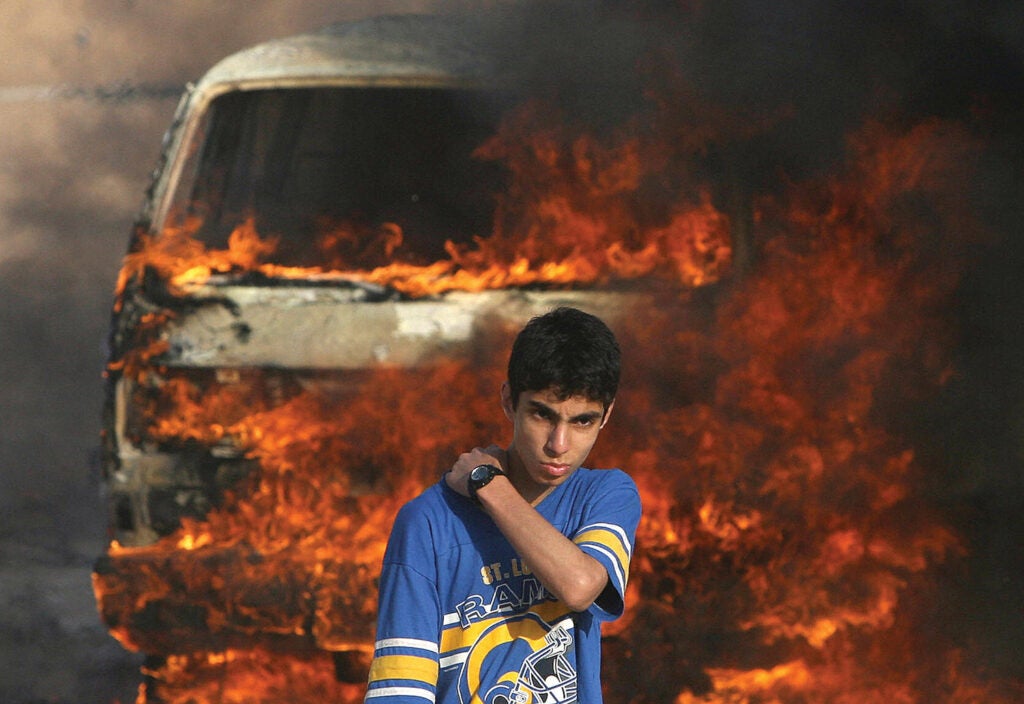 A Palestinian youth stands in front of a

A Palestinian youth stands in front of a burning vehicle during clashes between rival Fatah and Hamas in Gaza City, May 14, 2007. From: War is Beautiful by David Shields, published by powerHouse Books. 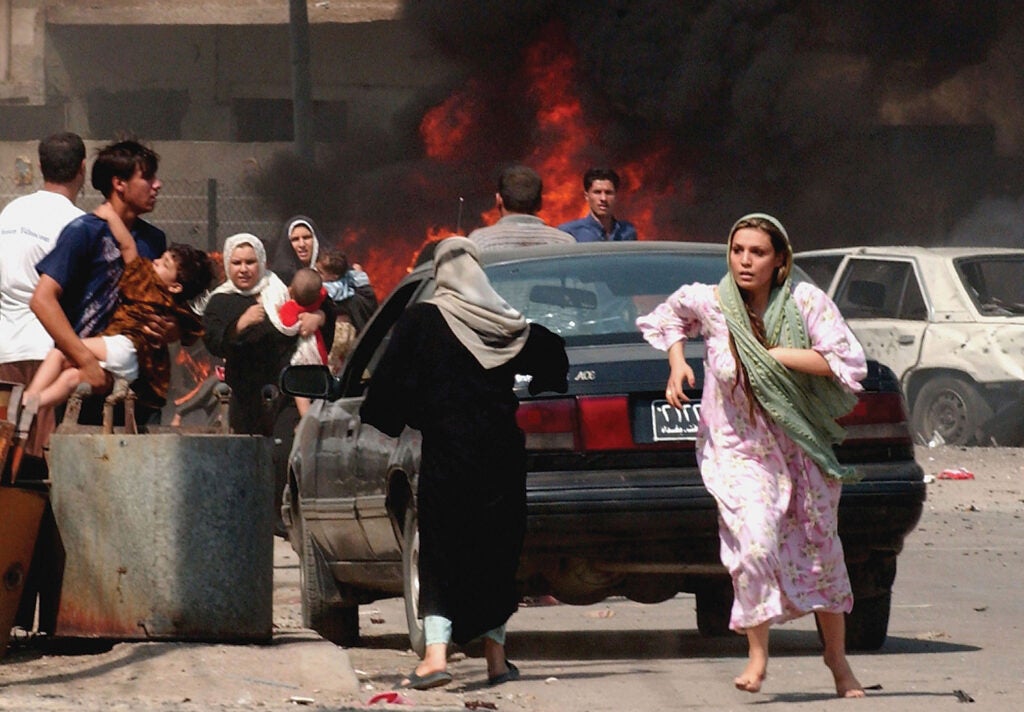 Iraqi citizens flee the scene after three explosions September 30, 2004 in Baghdad, Iraq. From: War is Beautiful by David Shields, published by powerHouse Books.

The title of David Shields’ photobook War Is Beautiful is both ironic and apt: For the most part these are attractive photographs; they happen to be made in war zones. “The pictures look monumental, they look majestic, they look problematically gorgeous,” Shields says. And therein lies the rub.

Over a span of 15 years, Shields has culled dozens of war images from the front pages of the New York Times—mostly in Iraq and Afghanistan—which are easy on the eyes. “I was amazed at how many times I would notice a really striking war photo on page A1 of the Times,” says Shields, who lives in Seattle and has been a longtime Times reader. “And something started to gnaw at me: Am I just imagining that these photographs are more beautiful than they should be?”

With help from research assistants, Shields checked the record: “We looked at every single Times cover, through microfilm, going back two decades,” he says. “And we found 700 war photographs that were, to me, possibly glamorizing. They were ostensibly reportage of the wars but had none of the stink and smell and blood of war—as great war photography has done historically from Mathew Brady though Robert Capa and beyond. These are virtually war-recruitment posters. They make it look cool.”

In his book, Shields presents 66 images that illustrate his key critique: “The photo editors [at the Times] have relied on tropes from art history, tropes of visual language, and as a result the pictures err hugely on the side of pictorial glamour and grandeur.” The book is even organized around said tropes: Chapter titles include “Nature,” “Painting,” “Pietà,” “Movie,” and “Love,” with illustrative examples of each. Mixed in is telling commentary, such as “Combat is the poor man’s cocaine,” from the late lensman John Hoagland.

Shields acknowledges that newspaper editors face a tricky balance: showing what’s going on in the world while not repelling their readers. He also notes that among U.S. media, the Times has been far from alone in its oft-soft coverage of recent wars.

“For me what tilts the critique is that the Times does have a unique position in English-language journalism,” he says. “It has a specific power to control the megaphone in American media and there is almost nothing shown here of war’s cost, of war’s disfigurement, of war’s death. It’s as if war is a kind of abstract metaphor.”

On this point Shields—a writer and not a photographer himself—points a finger more toward in-house editors than photojournalists in the field. “My critique lies very little with the war photographers who are braving life and limb and career to pay author to these extraordinary pictures,” he says. “Nowadays they are uploading photos immediately, all kinds of images. But my critique lands squarely on the desk of the photo editors, news editors, and art directors who seem to be stressing beauty over truth-telling. That is to me a terrible dereliction of journalistic duty.”

An author of more than 20 books, Shields says he has no idea how this volume will be received. “We’ll see how the Times responds, how the culture responds,” he says. “Part of me wishes I had gotten this book done years ago—but I think the message is very timely because war, alas, never goes away.”