"I just try to get ready for the unexpected moment—and not screw it up if it actually happens." 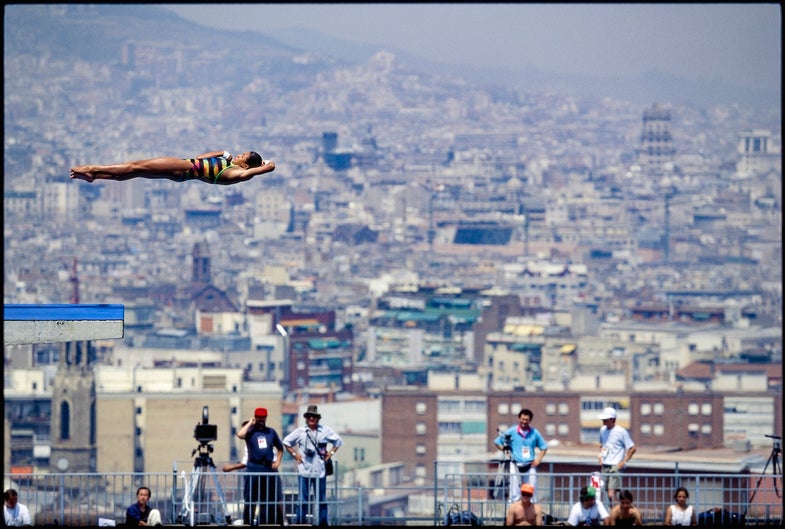 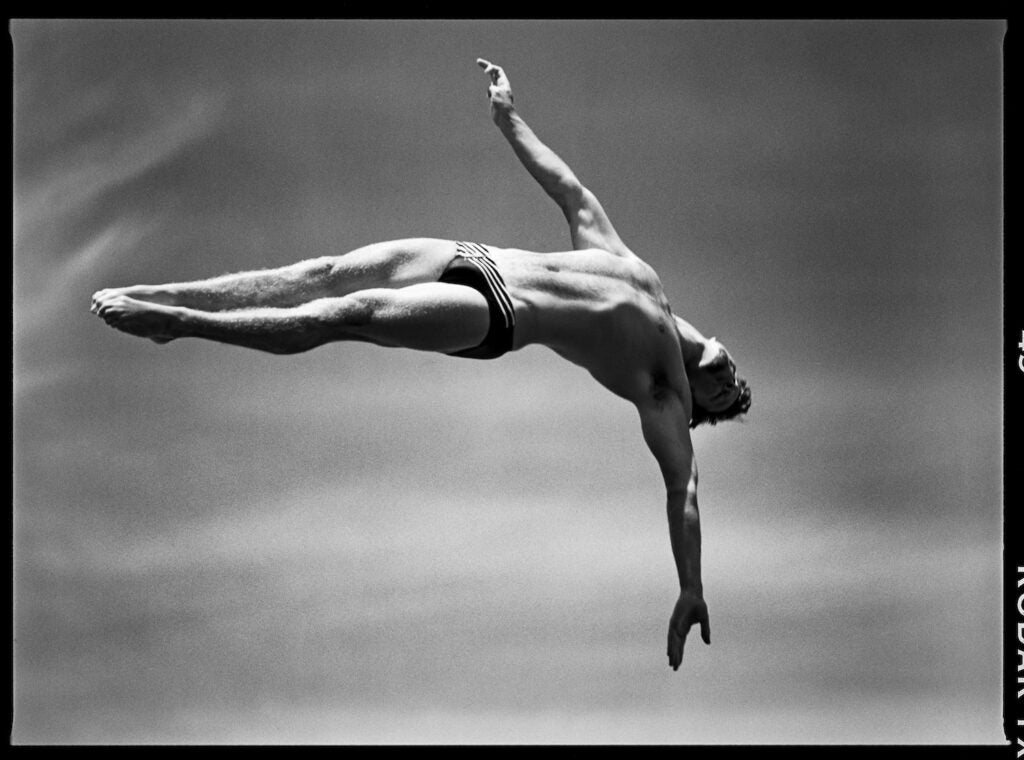 Veteran photojournalist David Burnett has covered every Olympics since 1984, and soon he will trek to Rio de Janeiro to shoot this summer’s Games for the International Olympic Committee. His typical goal: Capture the offbeat scenes that others might miss.

“When it comes to the Olympics, you have incredibly talented photographers all gathered in the same place,” Burnett says. “I’m with this small squad working for the IOC. I have the luxury of not being expected to get the winner in that victorious pose; I enjoy a certain amount of freedom to shoot what I want. I just try to get ready for the unexpected moment—and not screw it up if it actually happens.”

Focused on the Olympics, Burnett’s artful sports photography is currently on view at New York City’s Anastasia Photo through August 14. Titled Man Without Gravity (from the French phrase L’Homme sans gravité, the title of Burnett’s 2015 book from Editions Marabout), the exhibit spotlights many athletes in flight, from divers in Barcelona in 1992 to ski jumpers in Salt Lake City in 2002. “That’s what they do, the way they go,” Burnett says. “They are defying gravity.” 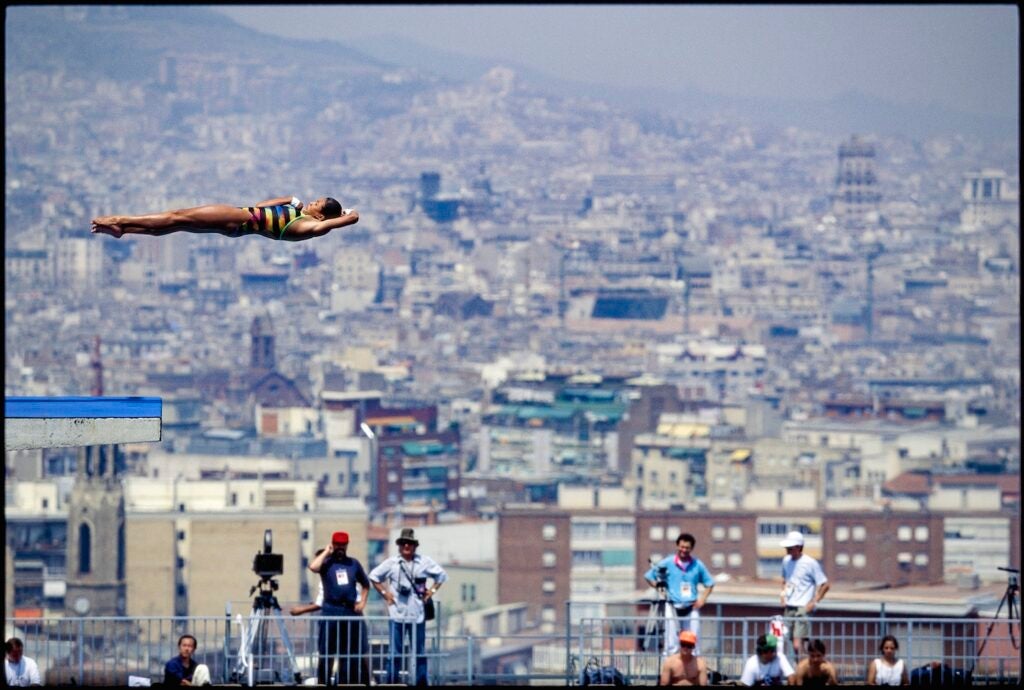 In the arena and behind the scenes, Burnett takes a fly-on-the-wall approach to shooting competitors. “I don’t get chatty with them or anything,” he says. “They are in a zone. They have their job to do and you’ve got your own job.”

Burnett has a knack for catching alternative views of the action, often using unconventional gear such as a Holga or Speed Graphic cameras. “I’m explicitly trying to shoot a bit wider, rather than just the usual close-ups. The technology keeps letting you get closer and faster, more frames-per-second, and I’m not convinced that’s always best,” he says. “Sometimes you’ve got to back it up a bit. There is always that atmospheric feeling that you’re trying to nail down, a more expressive kind of picture.” 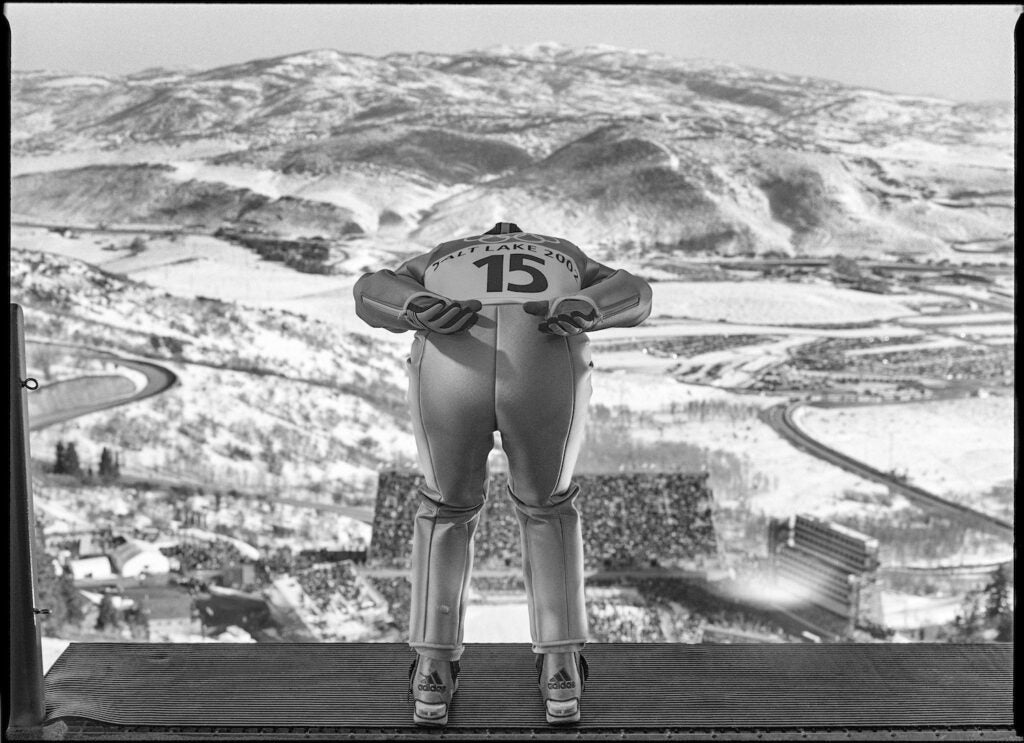 He notes that in the fast-moving realm of the Olympic Games, the watchword is adaptability. “I’ve been shooting with my old Bronica lately, the 6×6,” Burnett says. “It doesn’t so much work at the Olympics where there’s so much going on—you need to have a bit of lens flexibility. But I’ll take it anyway. You’re always looking to try and do something that’s going to give you a little edge up on everyone. You don’t just want to go shoot a normal picture.”

Man Without Gravity will be on view at Anastasia Photothrough August 14.