Close Encounters with David Bowie in the Seventies

Steve Schapiro’s portraits of the protean musical superstar, many unseen until now 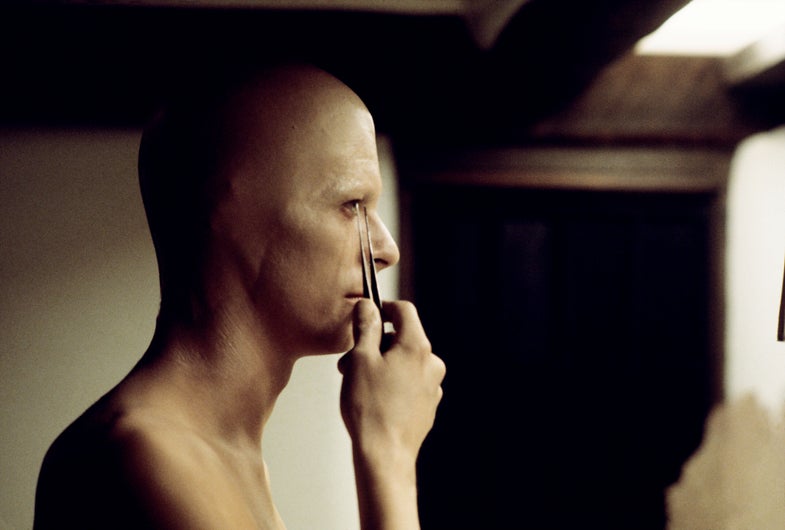 In the makeup trailer for The Man Who Fell to Earth in New Mexico in 1975, Bowie puts in his cat's eyes for a scene. "On set we got a lot of great pictures," Schapiro says. © Steve Schapiro
SHARE

As rock’s quintessential chameleon, David Bowie was famed for trying out new personas. According to portraitist Steve Schapiro, he might even do this multiple times within a single photo shoot.

“I would stop to take a picture, I would raise my camera, and he’d say, ‘Wait a minute, I’ll be right back,’ and he’d run to the dressing room. He’d come back 20 minutes later in something totally different—and we had never photographed the first piece,” Schapiro says. “It was totally disarming for a photographer. You’d see these fantastic outfits, great ideas, and you never got to shoot them. But luckily, there were a lot of ideas coming on.”

When Schapiro met Bowie in 1974, the singer had recently shed the lightening-bolt mask he’d donned as Aladdin Sane, the character who had in turn replaced Ziggy Stardust—the persona that first vaulted him to global stardom. In the mid-1970s Bowie veered into what he called “plastic soul” R&B just in time for the disco craze. He donned various guises in front of Schapiro’s camera, yet many images seemed to reveal that the whole rock-star trip—with its sex-and-drug trappings—was getting tiresome. Bowie’s real feelings emerged in his 1975 hit “Fame” (penned with John Lennon), which charted at #1 while elucidating the vapidity of stardom.

A long-time Life magazine lensman, Schapiro has photographed celebs from Robert Kennedy to Barbra Streisand to Marlon Brando, but he sensed something preternatural in Bowie. “When I work, I try to be very quiet so that my subject’s personality takes center stage,” Schapiro writes in his new photobook Bowie. “With Bowie, I knew instantly that the shoot would be easy.” The photographer had been compiling his book when he learned of the star’s passing this year at age 69.

When Bowie took on his first big film role in 1976’s The Man Who Fell to Earth, playing a disenchanted alien, Schapiro shot him on set and behind the scenes. Two of those images made their way to album covers: Station to Station, Bowie’s proving bid as a soul man, and Low, the first of his trilogy with techno-guru Brian Eno.

After that the singer played the hat-changing pop game with varied success but continual evolution. Many of Schapiro’s photos of him were unseen, until now. The photographer fondly recalls his Bowie memories with American Photo as his new book reaches stores.

When David Bowie died, this book had been in the works a while, right?

Yeah, it was in the works in October, and I had asked David to write something. I didn’t know his situation at the time. And we got back a note saying he wished us all the best on this project and he looked forward to seeing the book in the spring. Suddenly, when he died, we saw the “Lazarus” video—and it was amazing because it brought back what we did when we met: In my first shoot with David in 1974, he borrowed a dark shirt from one of my assistants. He went to the dressing room, and when he came back he had painted those diagonal stripes on everything, down to his toes. And he started drawing on the background paper some circles, a question mark, and an image from the Kabbalah tree, and to suddenly find that the very last thing he did was to come back to that outfit—that same look—was a total surprise. Certainly it made us change the direction of the book.

Did your assistant ask him to pay for the shirt?

That’s a good question [laughter]. I think we didn’t do that. Too late now. But we were really taken by him. He was not what we expected going into the studio. We had expected a real rock-and-roller—we had seen him in all these wonderful outlandish costumes—and it was surprising that he was so relaxed and calm, so intelligent. He had no real entourage. He wasn’t bringing in six-packs of beer or anything like that. He had a very definite sense of what he wanted to do in the shoot.

Was he the kind of guy you had to give direction to?

No, absolutely not. The best I figured it out, it was a time when he was trying out new characters, new costumes, new personalities. This was a person who had incredible imagination and enormous self-awareness. Whereas a lot of rock-and-rollers really know what works for an audience and keep coming back to it. You know, the Rolling Stones are fantastic—but basically it’s roughly the same rhythm, the same look, maybe with a different background or something. But with David, it seems to me that it’s such a sense of personal growth that he always wanted to explore something new. He just was a genius—there’s no two ways about it—and I brought a lot of his ideas into daylight.

This work was post-Aladdin Sane, post-Ziggy Stardust. Was it a time when he was stripping down and taking off the masks?

Yeah, he had come to Los Angeles, and I think it was a strange period for him—it might have been difficult. But I never saw that side of things. In all my connections with David, he would talk about philosophy, he would talk about ideas, he was charming—we had a good relationship. When he found out I had photographed Buster Keaton, he was incredibly excited. And then I helped him do the program for his Isolar tour in ’76 and he really insisted on getting in a Buster Keaton photo into that, so we put it together. I think he felt there was an affinity between him and Buster Keaton.

With all the props, did you get the feeling that it was hard to relate to him as a person? Was he always performing?

No, it was not a performance situation. We related very well; we were on the same wavelength. It’s important to me, as much as possible, to be on the wavelength of the people I’m photographing. When I worked for Life magazine, if they were doing a story on someone particularly celebrated, then two things: One, it became a collaboration, either said or unsaid; and two, they generally had really good ideas and you worked with them. With David it was very pleasant along the way. And most of the ideas were his.

It is striking that many of these images seem to show more of the real guy. Was that because he was comfortable with you?

I can’t say something like that, because that would be boastful. But yeah, we got along very well. We were relaxed and we could talk about things. I think I was able to photograph a side of David which in some ways was more like the person himself, rather than being onstage and acting out all of the characters he created. A picture toward the end of the book, with his hands in the foreground, shows that—there’s just a thoughtful look on it. I think it’s a sweet picture. 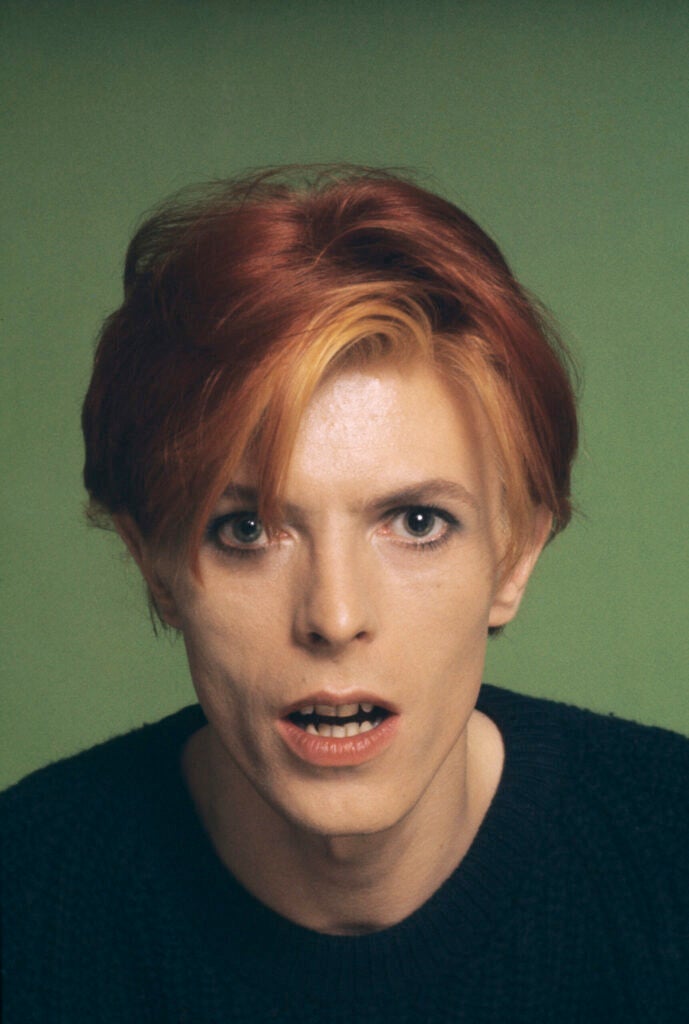 This is an outtake from a Shapiro cover shoot for People magazine. “David and I took the portraits against a putrid green background, which we both felt was the worst possible color to use as a background for a magazine cover,” Schapiro says. “We just thought it was was funny to do something totally out of line.”
Jack Crager