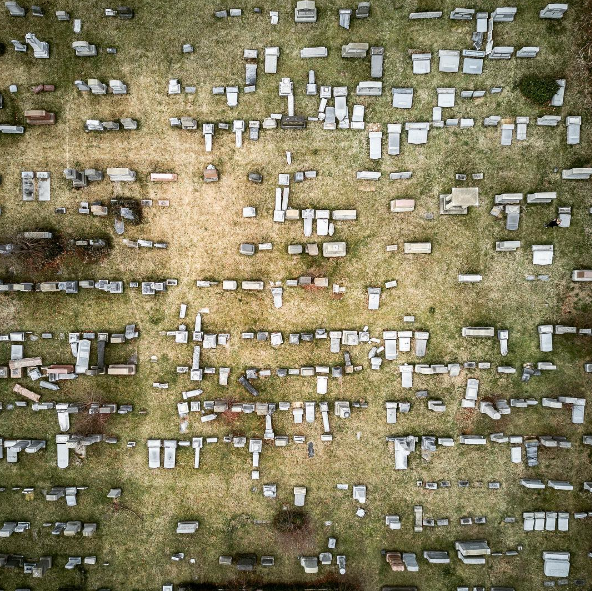 Over 100 gravestones were knocked over this weekend in what police consider an act of anti-Semitic vandalism at the Mount Carmel Jewish Cemetery in Philadephia. #igers_philly #hatecrimes #antisemitism #vandalism #cemetery #drone #aerial

When Philadelphia based photojournalist Charles Mostoller heard news that a Jewish Cemetery close to home had been vandalized he knew that he had to document it. “It’s such an important story,” he tells American Photo. “Even if no one was sending me there, I just felt like I had to go.”

Unfortunately, it took him a few days to make it to the scene. But, thanks to the use of a drone—which he’s primarily been using to capture geometric landscape of Philadelphia from above—he was able to capture the scope of the damage in a way that other photographers couldn’t.

Here, Mostoller speaks with us about why this gear was the right choice for the story.

At what point did you decide you wanted to photograph the toppled gravestones in Mount Carmel Jewish Cemetery from above?

I was going to go over the day after I heard about it, but I got pulled away for an assignment. On the 28, after people had already come and broken the news, I had a few hours before an assignment and I kept feeling drawn to get there. I packed up a whole bunch of cameras: my drone, my SLR, a film panoramic camera. I didn’t really know what to expect. As I was walking around I could see that there were a lot of headstones that had been knocked down, but without a ladder I realized I was never going to be able to get more than a few in any individual picture. You couldn’t see more than a row or two in any direction.

There were some people out there cataloging the damage, I photographed them and got some IDs, in case someone wanted to pick up anything later in the day. Then I went and got the drone. From having walked through it I knew where the area of the largest concentration was. It seemed to make perfect sense to me. The moment that I thought to use the drone I knew exactly what I wanted to do. Maybe 100-150 feet in the air, straight down and try to find the center of the highest concentration of knocked down grave stones.

Volunteers catalogue gravestones after over 100 gravestones were knocked over this weekend in what police consider an act of anti-Semitic vandalism at the Mount Carmel Jewish Cemetery in Philadephia. #igers_philly #hatecrimes #antisemitism #vandalism #cemetery

Why do you think that the drone-perspective works for conveying a story like this one?

In general I like that perspective looking straight down from above because it is really one that we never get to see. A lot of times people use drones because they have a drone—not because the story necessarily warrants it. I feel like this is one of those cases, where the stars aligned to some degree, to be a shot that really called for a drone.

I’m using a DJI Mavic Pro and its got a relatively narrow field of view. Its not as wide angle as our eyes or even a GoPro. It’s a unique perspective—one that most humans have not experienced except for maybe in drone photos. In this case, with the cemetery, the scale of it was pretty terrifyingly impressive. By the end of the day that I took that picture they had raised it from 100, to 150+ headstones that were knocked down. The combination of the uniqueness of the perspective—that draws people to the picture because they haven’t seen a picture like that before—and then the advantage of being really able to capture the scope of what had happened. It was one of those moments that the interesting aesthetic perspective of the drone and the necessities of documenting a journalistic assignment lined up.

Over 100 gravestones were knocked over this weekend in what police consider an act of anti-Semitic vandalism at the Mount Carmel Jewish Cemetery in Philadephia. #igers_philly #hatecrimes #antisemitism #vandalism #cemetery

Have you regularly been using the drone in a journalistic manner?

This is the first time where it was something that was more than just geometrically interesting. With a lot of my drone work I’m trying to look at the interaction between the man made environment and the natural environment and how those things ebb and flow and interact with one another and change over time. This isn’t really that. There have been a lot of anti-Semitic attacks here in Philadelphia. I think what I photographed is not an isolated incident. I think a lot of people are looking at this picture and seeing the scope of it. We are at an important moment in our society right now where the people who have anti-Semitic or anti-Muslim or racist beliefs, for years have felt like they had to stay in the hidden corners of the internet. Now, it is much more out in the open. If there isn’t a concerted national discussion on this and a rejection of these views it could spread further. I’m glad that this simple act of throwing a drone over this to show the scope of it has really connected with a lot of people. People can see what is happening in this country—a lot of racists and anti-semitic beliefs are bubbling up to the surface again. The question for everyone is how are we going to deal with it.

Would you like to try to use it for more journalistic purposes?

As long as the tool fits the story. A drone for a drones sake is not really a good idea, but when it fits the story, like this, absolutely.

Changing gears a bit, do you use the drone for video too?

I do shoot some video with it, but I prefer stills. I actually started shooting video with the drone, but found that I wasn’t getting a reel that interested me. it helped me learn how to use the controls of the drone, but I wasn’t proud of the work.

What was the learning curve like to learn to shoot with this tool?

Most of these drones will pretty much fly themselves—expect when they won’t. I think the hardest learning curve of the drone is to hold yourself back and teach yourself how to fly this thing. There is a learning curve of the actual technological capacity. In the drones case, its the capability of you as a pilot, how well can you maneuver it. I actually started with a cheap 50 dollar plastic drone that had no sensors or anything—pretty much the moment you put it in the air it wants to fall out of the sky. I taught myself how to stabilize one of those and fly one of those in a very small, controlled area. Part of it is having the patience to practice flying before I took it over locations where I would not want it to fall out of the sky. I think the other thing is that often you don’ really know what you are looking at until you are up there.

Has using a drone changed the way you think in terms of your photography—does image framing change for you?

Definitely. I tend to think of it in a very graphic sense. I do try to impose some amount of rectilinear organization on it, which can be hard because the world is not always straight lines from the sky. It’s almost like a modern painting. You’re trying to move ever so slightly and see the things come together—sometimes they are straight lines and sometimes they are curves or angles. I’m thinking of it from a more geometric perspective then I do when I’m normally shooting and thinking about emotion and interaction between things in the frame.

When you have the drone in the sky are you spending more time composing or shooting?

Composing. On a small flight, over the cemetery, in terms of unique shots, I took probably three. I found the spot I wanted and I took maybe 40 shots—slightly reframing, twisting a little here, including the path on the left or the fence on the right. The slightest maneuver of focusing can change it too. In any location where I fly the drone up I’m probably only going to come back with a whole bunch of versions of one shot where I’m working on different variations within the frame. There is not that much that you can do in terms of cropping and readjusting if things are a little bit wacky.