Captivating Portraits of Texan Women and Their Guns 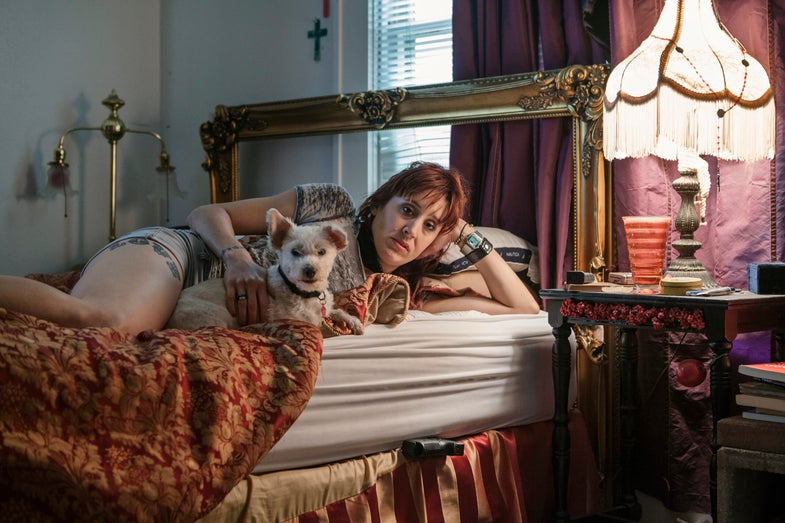 "My gun serves as my own personal militia of self-protection, perseverance and bad-assery. Sleeping with my glock under my mattress has afforded me more security than any door lock, alarm system or boyfriend. My alert dog, Scooby, helps too!". Shelley Calton
SHARE

Shelley Calton is no stranger to the complex feelings that come along with gun ownership, but in Texas, where Calton is from, guns are simply a way of life. This last month lawmakers in her state passed two new bills about the issue: one that allows licensed gun owners to openly carry handguns on the street and a second requiring public universities to allow concealed handguns on campus. But Calton’s fascination with the women of Texas who chose to arm themselves began long before that.

“A friend of mine had a scary visit at a hair salon,” Calton says regarding what sparked her interest in the topic. “Another woman dropped her bag when she was paying and her handgun went off. The bullet ricocheted around the salon and narrowly missed my friend.” This frightening story made Calton curious why women women were choosing to arm themselves and kicked off what would become a four year portrait project featuring a variety of Texas women who carry guns. A book of the work will be published this September by Kehrer Verlag.

Calton was raised around firearms and so the pistol-packing women who she photographed for the project weren’t unfamiliar. Calton says her father taught her how to shoot when she was about 10. “He would take us out to the country for target practice,” she recalls. “He had shot guns for bird hunting and a handgun in his nightstand for protection.”

She started with her personal circle of friends and as she worked found new portrait subjects through word of mouth—it turns out in Texas it isn’t difficult to find females who regularly carry guns. A year into the project Calton applied for her own concealed handgun license so she could understand the process of getting one and better relate to the women who were sitting for her portraits. Calton estimates that approximately 90 percent of the women she photographed hold the license, which gives gun owners the right to carry a concealed gun on their body in public. Some of the women Calton photographed kept their gun stashed in the back of their pants or secured to their ankle with a holster, many favored holding their gun inside of their purse, one woman even owned a special bra that she could tuck a tiny gun into.

Others kept their guns at home: many in the drawers of a nightstand, just like Calton’s father had done, but the photographer witnessed a variety of clever placements to allow for easy gun-access. “Casey kept her gun tucked between her mattresses so she could easily reach and grab it if she heard a strange noise or somebody tried to break in,” says Calton. “That was the first I had seen of that. It was just sticking out from between the two mattresses.”

The ways the women stored and carried their guns varied, but Calton found that the reasons many chose to arm themselves were consistent—as a way to protect themselves against the unknown. Although Calton says the vast majority of women she photographed had never used their weapons for self-defense, a number had experienced an incident that made them feel unsafe. “Several have had close calls where men could have hurt them,” says Calton. “A couple had home invasions and one had a car jacking.”

Calton says she hopes that her photographs will help people understand that gun ownership is a multifaceted and nuanced issue. “Guns are a complicated subject, but on a basic level the women own guns for protection,” she explains. “These women are making a bold statement: they refuse to be vulnerable and victimized.”

Concealed, She’s Got a Gun will be published in the U.S. by Kehrer Verlag this September. Signed copies can be purchased now through Calton’s website