Books of the Year: Mitch Dobrowner, Eye of the Storms

Even when shooting in his adopted city of Los Angeles, photographer Mitch Dobrowner creates ethereal, high-contrast landscapes with a outsize... 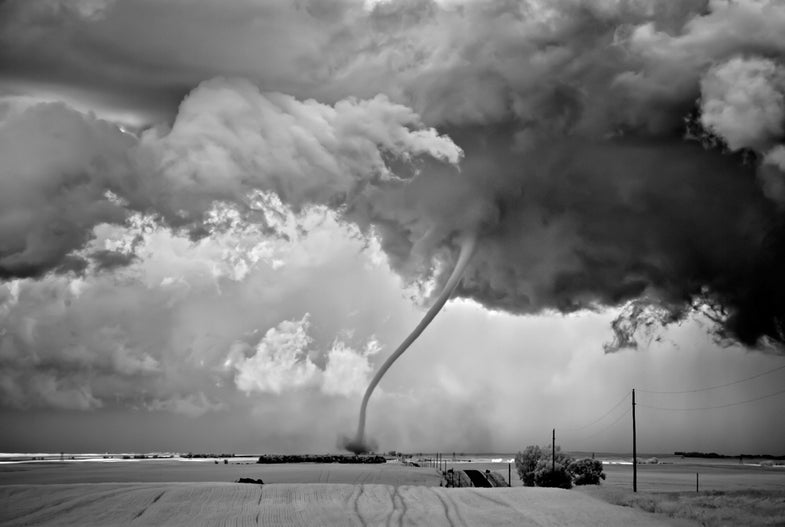 Even when shooting in his adopted city of Los Angeles, photographer Mitch Dobrowner creates ethereal, high-contrast landscapes with a outsize sense of scale and a dramatic interplay between earth and sky. Having established a career running a design studio (and raising a family) with his wife, Dobrowner refocused on his passion for black-and-white photography in 2005, making waves in the fine art world of galleries, limited-edition books and print sales with a series of landscapes and urban vistas (visit mitchdobrowner.com).

Beginning in late 2008, Dobrowner hit the road throughout the Western United States to photograph spectacular weather systems, a project that culminated with Storms_ (Aperture, $50), which_ American Photo_ chose as one of the 2013 Photo Books of the Year. Back home in Studio City, CA, Dobrowner shares his thoughts on shooting natural phenomena, which he likens to portraiture: “Each picture is like a kid to me,” he says. “Each one has a distinct personality.”_

How did you get into the business of storm-chasing? You write in the book of a pivotal experience shooting in Shiprock, New Mexico.
Well, the “Shiprock” shoot in late 2008 was quite a revelation. But I had always been photographing my Landscape project and my Urban project in inclement weather — I found it most interesting. So I just said, “I’ve heard of big storms out in Tornado Alley, so let me go see what it’s like.” I ended up hooking up with a great storm chaser, Roger Hill, and it was our second day out together, in the summer of 2009, that really got me.

There’s a picture called “Mesocyclone”, where we chased a storm from South Dakota through the Badlands and into Nebraska. And we got out and sitting in front of us was this 50,000-foot high mesocyclone rotating in the field, and I just turned to Roger and said, “What the f— am I looking at?” It was so surreal; the winds were howling at 50 mph. That was the day, that was the storm, that really said this is not an experiment any more: It’s going to turn into a project, something I’m going to want to photograph for a long time.

Roger was the one who knew where to go?
Yeah, he knew what I was looking for. I knew what I wanted to do. But if you want to be a race-car driver, you take lessons and you learn from experts. I wanted to jump-start the project, so I went after the most experienced person I could find to help me. Roger showed me a lot about meteorology, but I like to just concentrate on the photography. With a storm you have to get it to the right place at the right time, and the compositions and the light and the weather conditions are constantly changing, so it’s almost like photographing a sporting event. It’s like a hybrid between shooting landscapes and sports.

You look at the forming clouds as well as the foreground and the horizon …
What I’m trying to capture is what I feel like when I’m in the face of these phenomena. Just trying to get a sense of scale and beauty. I’m not so much into the destructive aspects. There are great photographers who capture the destruction, but that’s just not what I see in these things. I see wonder, and I’m trying to capture the feeling. And these are real images — they’re not manipulated.

But, especially with the tornado shots, there is an element of danger. Do you find yourself having to shoot and run?
You know, that happens. Everybody has their own kind of experience with these things. I don’t get scared — I’m so awestruck and it’s such a rush, such an exciting experience for me, that I don’t get scared. But there have been times when we’ll be chasing a storm and it changes direction and comes straight at us, and there’s baseball-sized hail and windows crack and things like that. For me, the whole point is understanding the subject matter. So I think those types of experiences help me photograph storms in a more intimate way. And I don’t by accident stand in front of a storm to take a picture. We’re there for a reason.

It’s deliberate, and you know roughly how long you have …
Yeah, I stay focused on the photography. And Roger helps with that. I hear the wind blowing and I hear lightening strike, and that’s a little intense because that’s so random, you never know where it’s going to hit. But the only thing I really listen for, when I’m photographing, is Roger saying, “Let’s get the hell out of here, right now!” [Laughter] And he’s already thought about the escape routes.

What do you shoot with? Are these always on a tripod?
I think every frame I’ve ever shot in my life has been on a tripod. I come from a large-format world, 4×5 and 8×10, but these are all digital. It’s much easier to set up a digital camera in front of these things. I actually prefer a live-view point-and-shoot camera, because you see what you get. So instead of shooting through, say, 4×5, where I have a ground glass and it’s upside-down backwards and I have a loop on it and a red filter, with live-view I shoot more in monochrome mode, without using a viewfinder. And I worked out a zone system for me that emulates what I’m looking at. I started this project with the Sony [Cyber-shot DSC-] R1, a terrific camera. But I realized that wasn’t the tool that was giving me the greatest flexibility out in the field, so I switched to the Canon EOS 5D Mark II. I carry a couple of those.

Do you always convert the images to black-and-white?
Well it’s an RGB file, and in the end it’s RAW. Part of my workflow is just turning off saturation in the RGB file. I see in black-and-white as a photographer. Everything is based on monochromatic tones. I always have — I haven’t printed a frame of color in 25 years. In the film days, you’d just pop in black-and-white film. With the digital cameras, unless you spend a lot of money on a monochrome camera, they’re only built for color pictures. So I had to work out a workflow to create black-and-white work without spending $30,000 on a camera. But I’m happy to bring back black-and-white landscape photography. If I can put that back into people’s consciousness, it’s a worthwhile thing.

You mentioned Ansel Adams as a key inspiration. Are there others?
Minor White also influenced me a lot. With Ansel Adams — it’s a cliché, but true — it has to do with his compositions, his workflow, the bridge between aesthetics and technology. Minor White had a lot to do with the light — looking at the light. A long time ago, I assisted Pete Turner and Hashi in New York. Pete taught me to think out of the box. Hashi was more like, think out of the box but you have to have restraint, you have to have a process, you can’t just be a wild man. I learned from watching them work.

For the most part, your storm pictures don’t have people in them …
When I’ve had opportunity to show the human element in the environment, I think it’s important because it gives you something to relate to. It gives a sense of scale. But my focus is on nature. With the storms, what I feel is that … we’re in their world. We built roads and all, but these natural events existed long before we were around. We think they’re moving through, but we built things in their way, you know? We live in their world — it’s not that they live in ours.