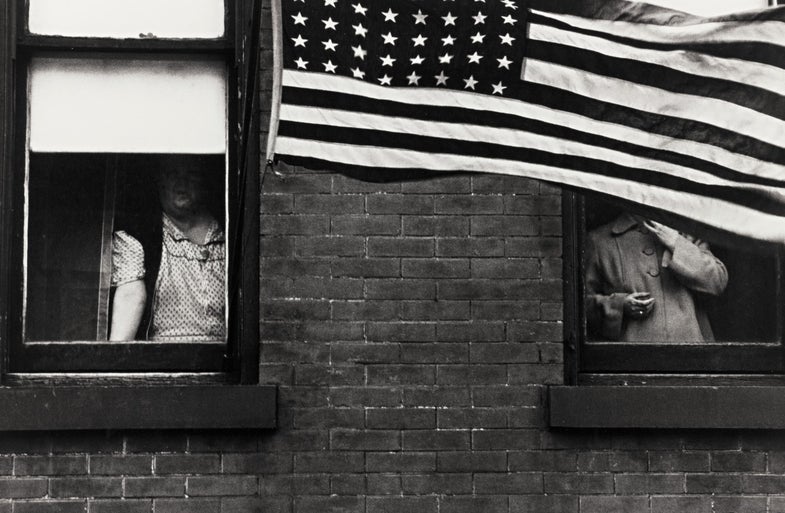 Robert Frank’s The Americans is easily one of the most influential photography books ever published. Although the title was initially panned when it was published in the late 1950s—the editors of Popular Photography described the work as being “warped,” “wart covered” and even un-American—but as time passed Frank’s asymmetrical, impressionistic images inspired countless artists.

“His book galvanized my generation,” photographer Ralph Gibson, who at one time worked with Frank, said during a panel discussion of the work. “The uncompromising content, a very strong point of view, the ambivalence of the immigrant and his virtuosity in camera handling…The Americans will go down as one of the greatest photo books of all time. It’s going to remain relevant indefinitely.”

While many photographers are familiar with work inside the groundbreaking book, it’s less likely that they’ve seen a large group of the images as prints. Frank printed four complete sets of the 83-image series in the early 1980s and placed the work with Addison Gallery of American Art in Andover, Massachusetts; Maison Européenne de la Photographie in Paris; the Museum of Contemporary Art in Los Angeles; and the Museum of Fine Arts in Houston. It is believed that these are the only four full sets that exist—Frank is notorious for keeping tight control over the images. But this week offers a rare opportunity to see a large grouping of the images on display.

All 77 gelatin silver prints from the Ruth and Jake Bloom Collection of The Americans are currently on view at Sotheby’s before they headed to auction on Dec. 17, 2015. The sale marks the first time such an extensive grouping of Frank’s work has appeared at auction and an unusual chance to see so many of these iconic images as photographic prints, as opposed to on the printed page.

The Blooms began collecting the work in the early 1990s with the intention to track down all 83 images that were published in The Americans. “It’s all over America, you cannot get a better depiction of what America was like at that time,” Jake Bloom says in a video interview about the collection. Although they couldn’t find them all, after two decades of collecting the Bloom’s managed to acquire 77 of the 83 images that appeared in the book.

“He didn’t make many prints of the ones that he didn’t like very much,” Stuart Alexander, one of the leading Robert Frank scholars, explained during the panel, which was hosted by Sotheby’s. “Simply because he wasn’t very fond of them.” According to Alexander, Frank was making editing decisions while he was processing film, sometimes throwing entire rolls away if they didn’t fit. The Americans was photographed and edited to be a cohesive story, and as a result, images that Frank didn’t necessarily love made it into the cut. The photographer’s preferences to print only the images he was fond of may well explain why it was difficult for the Blooms to complete their collection.

The well-known “New Orleans” (Trolley), which was published as the cover on the first edition of The Americans, has an estimate price of $200,000 to $300,000. “Miami Beach Hotel” (Elevator), which according to Sotheby’s has never appeared at auction before now, is estimated to sell for $150,000 to $250,000; the 12.5×18-inch print of this photograph in the Blooms’ collection is extra special, since it shows a much larger portion of the negative than the version that was published in the book. “Political Rally – Chicago” (estimate, $50,000–$70,000) also features a slight variation as we see a sliver of a woman’s profile on the righthand side of the frame. “Every time he printed them he printed them differently,” Ruth Bloom explained during the panel about the work.

Walking through the Sotheby’s gallery, I saw a number of Robert Frank prints that I’d happily hang on my walls. So what is it like to eat your meals staring at the work of one of photography’s masters?

“When you have as many as we have had you can’t focus on just one,” Ruth Bloom said regarding her collection. “Each image has a story to tell. Each one speaks to you individually.”

Update: At the conclusion of the Dec. 17 auction 89.6% of the Ruth and Jake Bloom Collection collection sold for a strong $3,739,375. “Hoboken” (Parade) led the auction with a final price of $237,500 (estimated $120,000 to $180,000). “The strong results of tonight’s sale illustrated the market’s enduring enthusiasm for Robert Frank’s pivotal works,” Christopher Mahoney, Head of Sotheby’s Photographs Department, said in a statement. “We saw bidders competing intensely throughout the sale, driving many lots to prices well above their estimates.”