2013 Photo Books of the Year: Documentary

Before They Pass Away by Jimmy Nelson | Teneues | $150 Nelson documents members of 20 threatened indigenous cultures throughout... 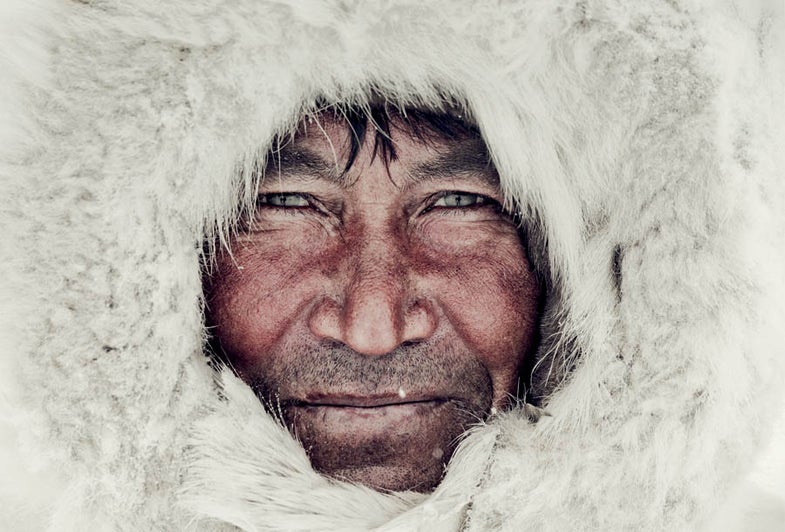 Before They Pass Away
by Jimmy Nelson | Teneues | $150
Nelson documents members of 20 threatened indigenous cultures throughout the world—while they’re still with us, as his title indicates. From the reindeer-based Nanets of Siberia (above) to the nomadic Maasai people of Tanzania, Nelson’s subjects don ornamental garb and enact ancient rituals in his portraits, sometimes shot against black seamless and other times in their breathtakingly pristine environs. “He becomes one of them, almost wilder and prouder than they are,” writes Mark Blaisse in his essay on Nelson. “Show us the essence of your being, he orders—and out come the belts and jewels, the knives and spears hidden in cupboards, the traditional chief’s headwear and the warrior’s face paint. A catalyst is exactly what he is. He literally begs us all to open our eyes and start caring.”

The Enclave
by Richard Mosse | Aperture | $80
Following up on last year’s volume, Infra, Mosse’s exposé on the Democratic Republic of Congo depicts both war scenes and natural grandeur in rose-colored infrared images. Though the hues are surreal, the realities are sobering indeed.

Photojournalists On War
edited by Michael Kamber | University of Texas Press | $65
Bearing witness to the Iraq War, 39 photojournalists describe scenes of heroism and pangs of guilt: the horrors they saw, their frustrations over censorship. The pictures range from the bravery of Iraqi residents carrying on in war zones to the unsightly injuries of soldiers.

Humans of New York
by Brandon Stanton | St. Martin’s | $30
An outgrowth of Stanton’s wildly popular website, Humans celebrates ordinary people with extraordinary flair. The street portraits are warm and candid, while the subjects’ comments are all the more compelling for their lack of polish.

If You Knew Me You Would Care
by Rennio Maifredi | Powerhouse | $65
In war-torn lands from the Congo to Bosnia, Maifredi depicts women who have survived violence, rape, and displacement in portraits showing strength and resolve. “The sitter is not robbed of her soul,” writes actress Meryl Streep in her foreword. “She has expanded it out into the larger world, where we who are lucky to lock eyes with her have the privilege to pay attention, give respect, and connect.”

A Period of Juvenile Prosperity
by Mike Brodie | Twin Palms | $65
Brodie’s version of On the Road has few words and many memorable images: train hoppers, hitchhikers, and other adventurous souls in a world that’s romantic and bleak, often at once.

Vietnam, the Real War
text by Pete Hamill | Abrams | $40
This Associated Press survey of modern America’s most divisive war includes iconic photos by Eddie Adams and Nick Ut as well as never-seen shots by AP journeymen. “Say the word ‘Vietnam,'” writes Hamill, “and the image that rises is usually a photograph. An AP photograph.”

Minescape
by Brett Van Ort | Daylight | $35
Van Ort contrasts benign-looking nature scenes in Bosnia and Herzegovina with shots of land mines and other hidden weapons found in these bucolic areas—as well as prosthetic limbs used by victims of the wartime devices.

Passage to Burma
by Scott Stulberg | Skyhorse Publishing | $45
Though the country has been racked by political strife, Stulberg’s Burma is a pacifist haven of orange-clad monks, outbound fishermen, dazzling statues, and hazy hillsides. “You can’t help but feel as though you have gone back in time,” he writes. “The awe-inspiring landscape is as ethereal as anywhere I have been on this planet.”

Bourke-White: Moments in History
text by Sean Quimby | La Fabrica | $55
The most expansive monograph of Margaret Bourke-White’s work to date, this concentrates on her industrial images from the 1930s and her WWII photographs from the ’40s, ending with her haunting post-war tours of German concentration camps.

Weegee: Murder is My Business
by Brian Wallis | Prestel | $50
Ironically, the catalog from this 2012 show was late to appear—that would never be said of Weegee, the timely ambulance chaser. For murder buffs, it’s all here: the bodies, the blood and gore, the wide-eyed onlooker scenes that Weegee specialized in before he went Hollywood (that’s a different story). We’ll take his lurid NYC work any day.

Bill Brandt: Shadow and Light
text by Sarah Hermanson Meister | Moma | $50
In contrast to an alternate new book of Brandt’s nudes, this volume shows his full range, including studies of working-class Londoners in the 1930s and surreal French landscapes in the 1950s.

Brassaï: Paris Nocturne
text by Sylvie Aubenas | Thames & Hudson | $85
Brassaï was the great chronicler of shadowy glamour and vice in the city of light. With unprecedented scope, this 312-page tome takes us from glistening rain-soaked streets to illicit houses of pleasure and back again.