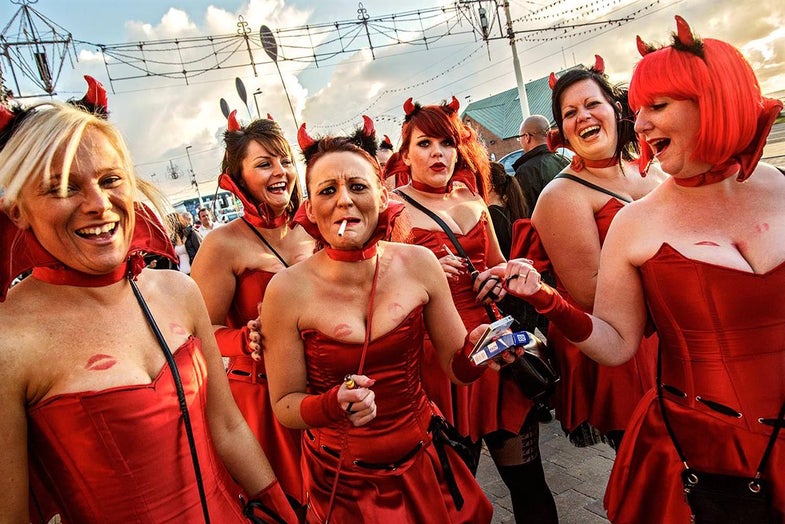 Upstate Girls is the first shipping container you’ll encounter if you are entering the park from the south side and its effect is dizzying. Documentary photographer Brenda Ann Kenneally has literally plastered the walls with photographs and ephemera from her decade-long, collaborative documentary photography project following a group of young people from Troy, New York. A timeline that unravels the history of this industrial town along the Hudson River is presented alongside the photographs and short videos narrated by Kenneally to help bind the stories of these many individuals together. 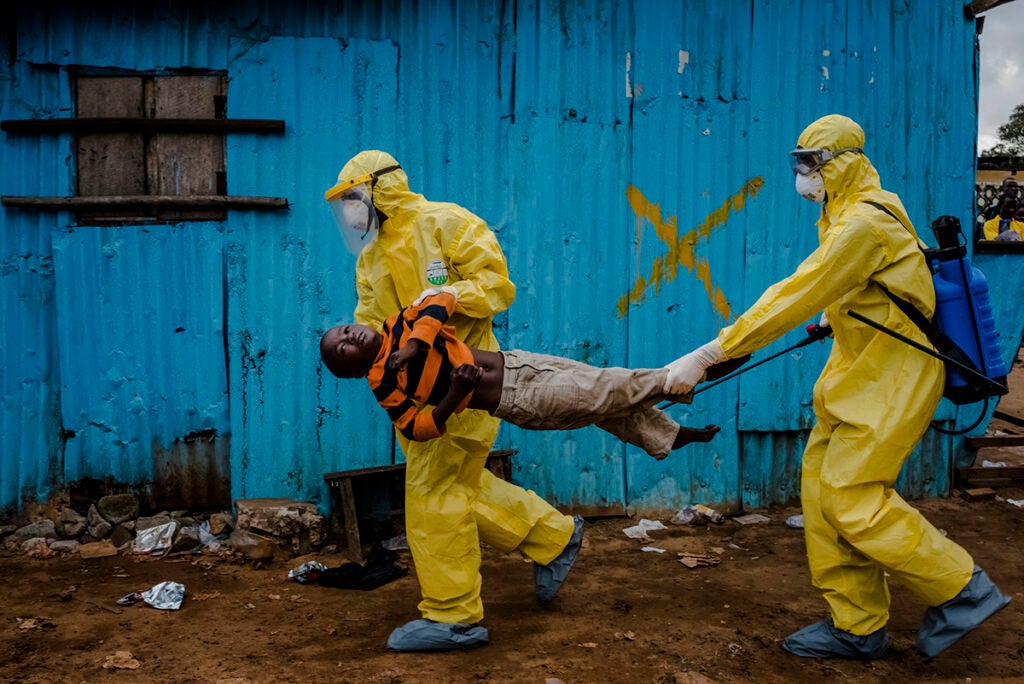 SCENES FROM THE EBOLA CRISIS

The New York Times presents an entire shipping container filled with Daniel Berehulak’s Pulitzer Prize winning photography documenting the Ebola crisis. Although at this point these photographs have been widely distributed to see them blown up to such a massive size increases their impact.

Blast force has been one of the signature injuries of the conflicts in the Middle East. Although the damage from blast force is unseen, the psychological scars it can leave behind are massive—shattered nerve pathways lead to soldiers feeling like a different person. In Blast Force Survivors, Lynn Johnson documents a group of soldiers who work with the National Intrepid Center of Excellence who make masks to help heal these invisible wounds. “Making art cracks open the trauma and then knits the brain. The masks, like MRIs of their psyches, make the scars of blast force visible, a first step to healing,” Johnson says. One of these homemade masks is also presented inside of the container.

One of our favorite books from 2014, Eugene Richards’ documentary project of life in the Arkansas Delta spans nearly 40 years. Red Ball of A Sun Slipping Down mixes early black and white work from the region with more recent color photographs. Poetic captions accompany each frame and by the time you’ve reached the end of the container you’ve also read a short story with themes of remembrance and change.

Documentary photographer Radcliffe Roye presents striking portraits of black Americans inside his container exhibit at Photoville. “Recently, news of black men and women being killed by some members of law enforcement has raised the consciousness of this country to see how black folks have been living,” he says of the work. “From photographing everyday life in places like South Carolina, Memphis, and Mississippi, and documenting some of the tumultuous protests from the streets of Ferguson and New York City, I show you the faces of those whose lives are spent in protest.”

Shot during three visits in a single year, Debi Cornwall’s images from the Guantánamo Bay Naval base juxtapose the grim existence of the remaining prisoners and military personnel living in Gitmo. Over 100 men remain held at Gitmo, indefinitely it seems, despite many of them being cleared for release years earlier. Cornwall was unable to photograph the faces at Gitmo, but communicates the absurdity of daily live on base by photographing the interior and exterior spaces. Ephemera from the prison grounds are presented alongside the large-scale photographs and on the back wall of the container a massive photograph shows off a variety of gift shop souvenirs from Guantánamo Bay.

PDN’s container is always a great way to get a sneak peek of the photography projects and photographers who are on the up and up. This year’s exhibit features images from Philip Montgomery’s coverage of Ferguson, Missouri; Sara Naomi Lewkowicz’s images of the Prancing Elites dance team in Alabama and many more.

An immersive exhibit from photographer Graham MacIndoe and reporter Susan Stellin, American Exile takes an in-depth look at the effects of deportation on families. Formal portraits of the deported and the family members left behind are presented in an integrated form with pull quotes from extensive interviews and brief stats about each case.

Curated by music photographer Janette Beckman, Down and Dirty explodes across the walls of its shipping container. The exhibit features nearly four decades worth of music photography from over 50 photographers from the likes of GODLIS, Danny Clinch, Joe Conzo, Roberta Bayley and many more. Live shots and formal portraits intermingle as do the genres. Everything is printed small, so expect to spend a lot of time sucking up the details of each image. 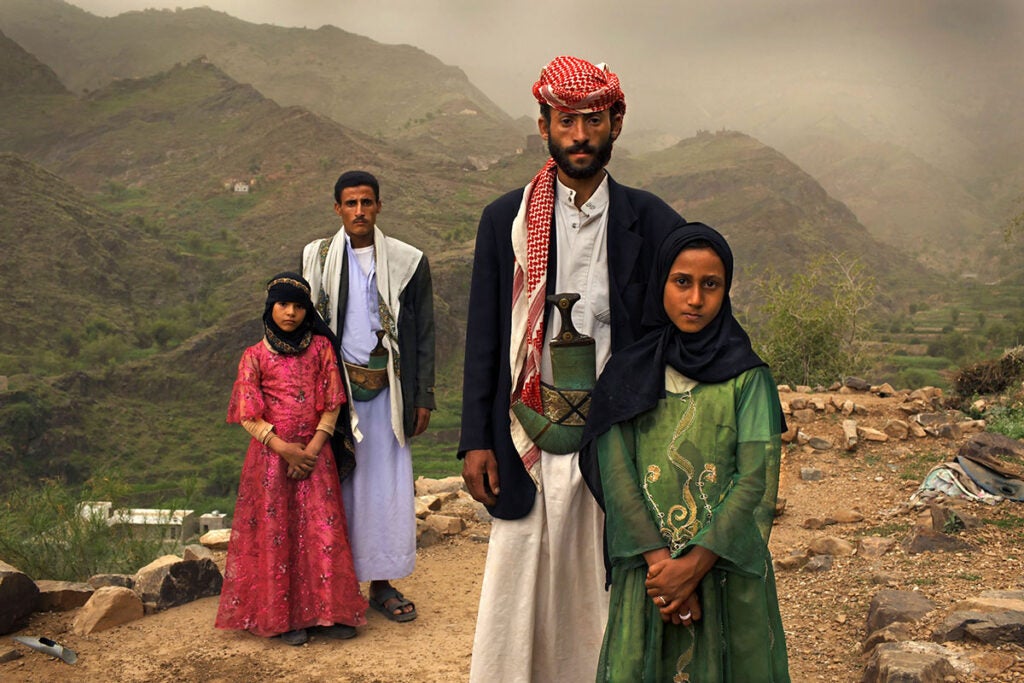 TOO YOUNG TO WED

Stephanie Sinclair has spent over a decade documenting young girls around the world who are married off as children. In that time Sinclair has morphed her documentary photography projects into the nonprofit, Too Young To Wed, which calls on foreign governments to end the practice of child marriage. The Photoville exhibition includes portraits of child brides posing alongside men old enough to be their fathers or grandfathers, girls who experienced extreme violence at the hands of their husbands when they tried to flee, and young teenage mothers nursing children that are a result of these arranged child marriages. During Photoville, Sinclair is holding a $100 8×10 print sale of select images with all proceeds going supporting the non-profits programing work.

Dougie Wallace documents the debauchery of Blackpool, England as “marauding packs of brides and grooms, close friends and family, on a mission to consume dangerous, liver-crushing levels of alcohol,” descend on the region. Wallace’s images are bright and playful and you can almost smell the booze wafting off his subjects. Stags, Hens & Bunnies, is a great visual vacation among a festival with many heavy stories.

Brooklyn’s fourth annual free outdoor photo festival, Photoville, opens its gates for the second and final weekend later today. This year’s festival features over 60 exhibitions housed inside shipping containers and plastered on the outside walls, a number of hands-on workshops as well as panels. It’s also a pretty great places to brush shoulders with some of the most important documentary photographers working today. Here are 12 things we saw that we found particularly impressive.