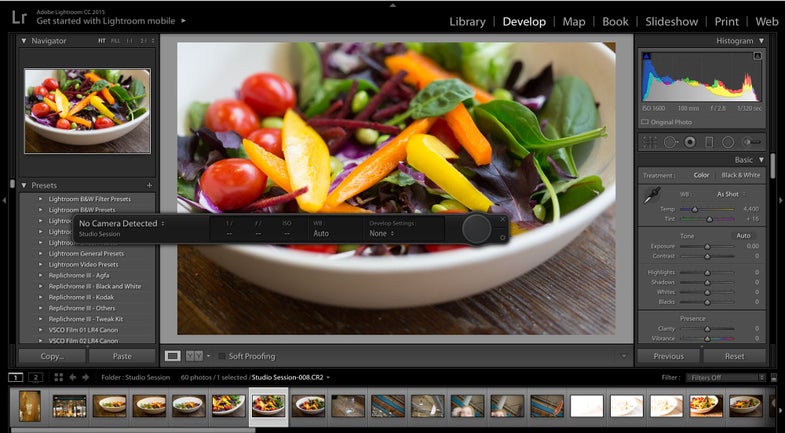 Procedural software updates often don’t make for very exciting blog posts, but when it’s something as crucial to so many photographers as Adobe Lightroom, it can be a big deal, especially if it doesn’t go well. The latest update is called Lightroom CC 2015.4 (or Lightroom 6.4 if you’re not a Creative Cloud subscriber) and it brings an assortment of upgrades, and fixes one issue that was vexing a bunch of Nikon shooters.

The big new feature is called Boundary Warp and it applies to the panorama merge function. Often, when you stitch together a bunch of photos into a panorama, you’re left with oddly-shaped edges and the photo needs to be cropped back into a normal shape. Now, Lightroom will try to warp the image so it fills the entire frame and you can presumably retain more of the image contents than you would with a crop. Adobe also suggests that the panorama merge process will now be twice as fast as the previous version, which I’m very eager to test out.

The big bug fix addresses an issue that was preventing Nikon users from tethering their cameras to Lightroom if they had made the jump tot he most recent version of Apple’s OS X. That’s a big one for studio shooters who rely on tethered shooting.

Beyond that, there’s the usual selection of minor updates and bug fixes, which are pasted below. There’s also a new class of supported cameras and lenses that have official profiles for automatic corrections in the develop module.

One thing that stood out to me is the promise for better performance out of the Upright image straighten tool, which is something I use quite frequently.

Updates: ▪ Nikon 1 J4 Camera Matching Profile added ▪ The panorama merging process should complete roughly twice as fast as Lightroom 6.3 ▪ Improved quality when applying Auto Straighten and Upright “Level” mode ▪ A preference was added to the Mac to prevent accidental “speed swiping” ▪ Metadata is added to merged panoramas to support Photoshop’s Adaptive Wide Angle filter ▪ Customers can now set the location of where photos are stored when downloaded from Lightroom mobile or Lightroom web in the preference panel or contextually in the folder panel ▪ Thumbnails update much quicker when copying and pasting settings in the grid view ▪ Images load faster in the Library module when you are zoomed in and navigating images ▪ Tethered support added for the Nikon D5500 and Nikon D7200

Bug Fixes: ▪ Auto Sync of some settings failed when using smart previews ▪ Lightroom would ignore model-specific custom default settings for some cameras, including some Leica and Sony models. ▪ Crop resets to image bounds when adjusting rotation via slider ▪ In Lights Out mode, an image would “disappear” if a customer uses the Undo functionality ▪ SIGMA 50mm f1.4 ART lens was incorrectly identified as Zeiss Milvus 50mm f1.4 ▪ Soft Proofing RGB readout values differed for same file between 5.7.1 and 6.x ▪ Import from iPhoto would result in all photos receiving a “pick” flag ▪ Comments from Lightroom web come in to Lightroom on the desktop as already “read.” ▪ Lightroom would not display the correct EXIF metadata for some video files generated by Canon, Fuji and Panasonic cameras ▪ Vertical panoramas created using Merge could appear with the wrong orientation ▪ The video cache did not respect the maximum size specified in the preferences ▪ Customers experienced issues importing video files in some scenarios ▪ Tethering Nikon cameras on Mac OS X 10.11(El Capitan) did not work properly

Read all the features on the official Adobe post