FYI: What Shutter Speed Do You Need To Photograph The 800 MPH Hyperloop?

Can you camera capture a sharp shot of the ultra-fast mode of transportation? 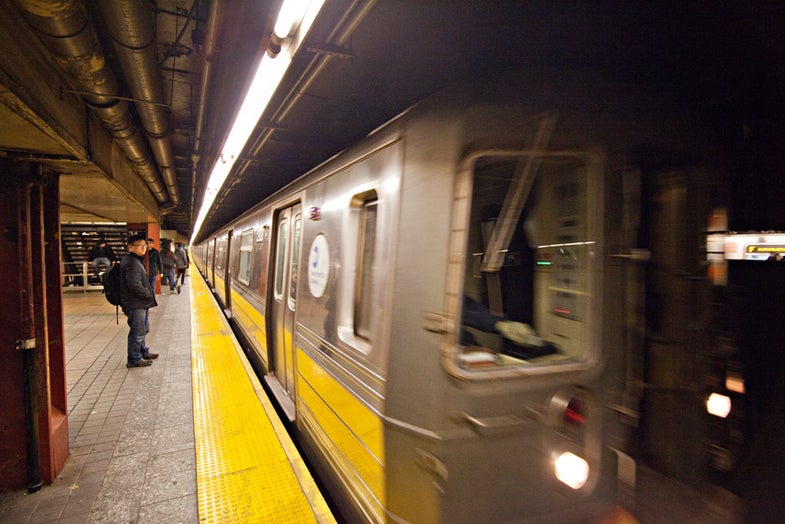 The New York City Subway: Much easier to photograph than the Hyperloop. Dan Bracaglia
SHARE

It’s photo 101: If you want a sharp picture of a fast-moving object, you need a short shutter speed. Yesterday, Elon Musk announced his plan for the Hyperloop, an ultra-high-speed transit system that will transport passengers from LA to San Francisco in a half hour. In doing so, it will hit speeds of nearly 800 miles-per-hour. That’s pretty darn fast. But, how fast of a shutter speed would you need to get a sharp photo of it? The answer is a little bit complicated.

There are a few things you have to consider: Your distance from the object, the focal length of your lens, the speed at which your object is moving, and the final output size of your photo.

Ultimately, what determines motion blur is how far an object is able to move across the camera’s field of view while the sensor is exposed. By using a shorter focal length, you’ll increase your field of view. As a result, an object at a consistent distance will take longer to travel across the frame with a wide angle lens than it will with a telephoto lens.

Need a demonstration? Picture a person running on a line drawn 50-feet in front of you from left to right. How long will it take them to travel across the whole frame if you’re zoomed to 24mm? Now imagine you zoom in to 70mm, but everything else stays the same. The runner will move in and out of view much quicker. Because of this, the 70mm image will have more motion blur than the 24mm image.

Distance from your subject plays a similar role. If you’ve ever stood on the edge of a highway or even a normal road, you’ve probably noticed how much faster the cars seem to be going when you’re next to them. Getting closer to an object makes it travel across your field of view faster. If you back up, you get the opposite effect.

Then, of course, there’s the actual speed of the object you’re shooting. Pro sports shooters on the sidelines of an NFL game regularly try to keep shutter speeds up around 1/1000th sec. in order to keep things sharp. Pro race car photographers can go all the way up to the 1/8000th sec. limit on most high-end DSLRs. But, none of those things are moving even close to 800 mph.

Finally, there’s the size of your print. The smaller you display something, the more leeway you have when it comes to absolute sharpness. Something that looks sharp when displayed on Facebook, might look like a blurry mess when blown up in an 8×10 print. You obviously want to get things as sharp as possible, but in the end, it’s a give and take.

So, back to the original question at hand: How fast does your shutter speed to be to capture the 800 mph Hyperloop transport system? To figure it out, there are actually a few shutter speed calculators online, like this one from Cambridge In Color.

If you don’t want to be that far away, you can go back to 100-feet and use a wider lens. At 22mm, you’ll be able to get a clear shot of the train from that distance. Of course, the train will still be very small due to the lens. If you start adding a crop factor (like an APS-C sensor inside of a DSLR), your field of view shrinks again, which means shutter speed needs to be even faster.

The numbers on these calculators vary, so you shouldn’t take it as gospel, but it is a good starting point as far as getting a quick ballpark idea of how tricky this really is. The real Hyperloop (if it should ever become real) will be sealed inside of a tube, so you couldn’t really get a photo of it anyway. Makes picture taking more difficult, but better than hitting a goose going 750 mph.

Using high-speed photography techniques, like those used by the iconic high-speed photographer, Doc Edgerton, a capture would certainly be possible. A trusty slow-motion camera like the Phantom would also have a better time than your DSLR. Their cameras are capable of up to a million fps at extremely low resolutions.

It’s also worth noting that there are no windows on the Hyperloop, so that saves us from having to do the math on what it would take to shoot out the window as a rider. Whew.