This fluffy ball contains the story of the universe

The ghost of a supernova looks like a ball of cotton candy. 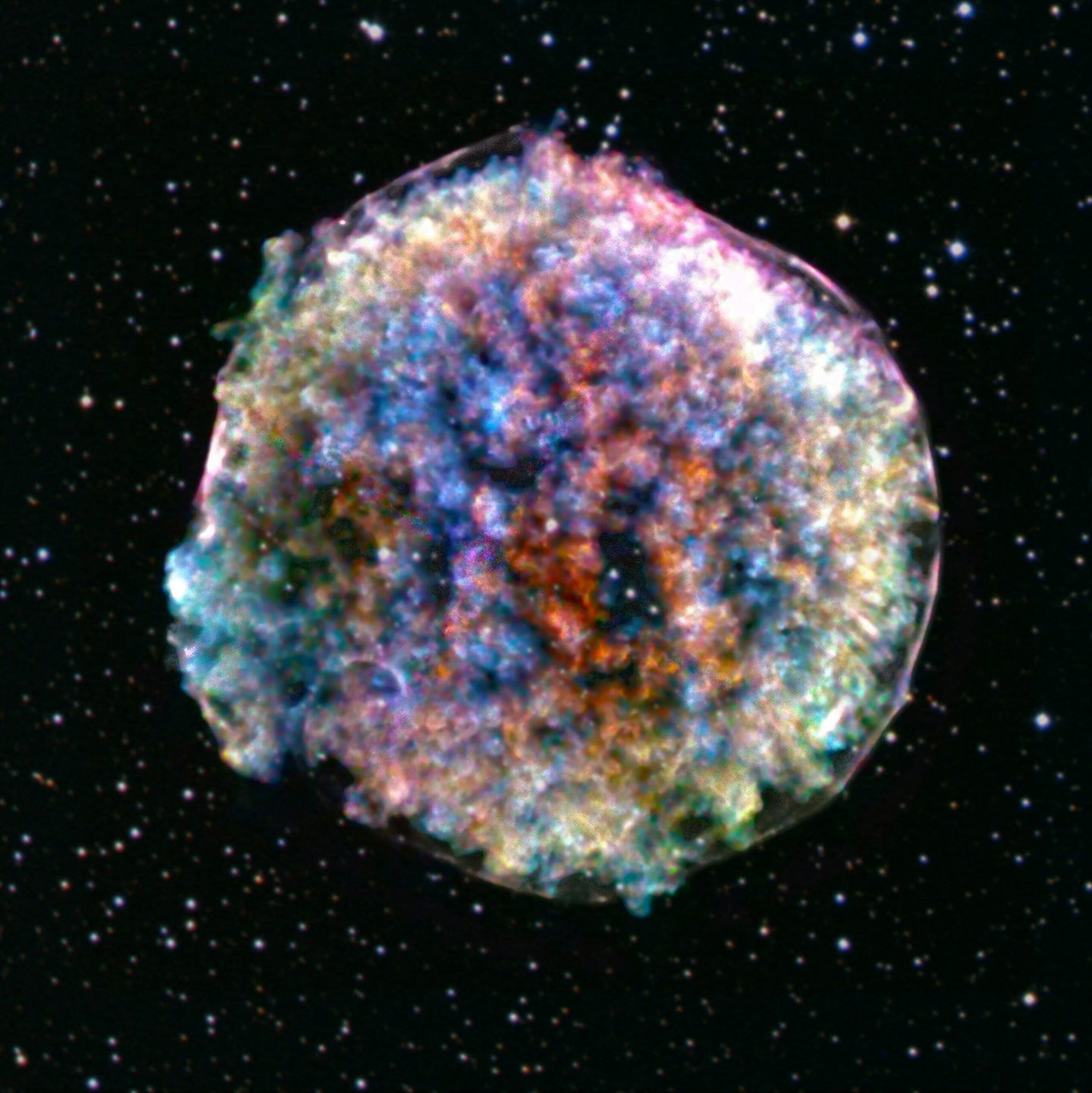 More than 10 thousand years ago, a star in our galaxy exploded. The light from this explosion didn’t reach Earth until 1572, when the astronomer Tycho Brahe saw a burst of brightness in the night sky and mistook it for a new star being born. We now know that this flare was actually a white dwarf star going supernova—a violently explosive wave of energy and matter that a star emits as it dies. Nearly 500 years later, the imprint of that explosive burst is still visible—and it’s very fluffy.

“You look at this image, and it sort of looks like it’s cotton candy,” says Brian Williams, a NASA astronomer who helped take the latest photograph of the supernova remnant. Scientists use these cosmic fireworks to understand and test theories of supernovae. Currently, astronomers don’t know all that much about how supernovae form, Williams adds, or how the the explosion progresses. Further, understanding the mechanism that creates the outburst’s distinctive shape— described as “fluffy” and “clumpy“—has been particularly baffling.

Tycho is classified as a Type 1a supernova—it underwent a massive thermonuclear explosion, letting off a shockwave that moved at almost 3,100 miles per second. The wave hit nearby gas and dust, heating the air and particles by millions of degrees. The human eye can’t pick up on any of this action, but the activity shines bright in X-ray photographs (X-rays have higher energy than visible light, and tend to come from extremely hot objects, like black holes, galaxy clusters, and supernovae).

This image of Tycho “is visually striking, and also scientifically meaningful,” says Gilles Ferrand, a physicist who uses data to build 3D visualizations of supernovae. “It’s not the first time we got an image from Tycho. But there’s something new in this image that’s interesting.”

That “new” thing is the blue and red in the center of the photo. Most of the colors in the shot—red, yellow, cyan, navy blue, purple, and orange—represent different energy levels as viewed through the x-ray telescope (red and yellow being the lowest, orange and purple being the highest). In this new photo of Tycho, scientists were also able to isolate and visualize a specific element: silicon—the clumps of blue in the center represent the silicon moving toward us, and the red is the silicon moving away.

Scientists have two potential explanations for how the Tycho remnant formed these fluffy balls. The first posits that the explosion was originally round and smooth, and as it expanded, fluid instability (between the particles in space and the matter from the explosion) caused those misshapen lumpy bits. The second possibility is that it was clumpy from the get-go. In that scenario, the dying star didn’t just undergo one single major explosion, but many. In the first model, the white dwarf is like a nuclear bomb; in the second, it’s like millions of sticks of dynamite.

Using what Williams called a “complicated image analysis technique,” scientists examined the number of chunks and holes in the image (looking at where they appear, where they don’t, and how big they are). From all of this data, they were able to build a mathematical map of these clumps. When astronomers compared that map to a simulation of a supernova, they discovered that the second option—the millions of sticks of dynamite exploding at once—was more likely.

These clumps are rich in heavy elements like iron and silicon. This makes sense based on what scientists know about how the universe was formed. Initially the expanse was made up only of simple light elements, like hydrogen and helium. Most heavy elements formed inside the stars, synthesized during these supernova explosions. The bursts also sent them flying throughout the galaxy. When the next generations of stars form, they form out of this matter.

Nasa
Photo Of The Day
space