It’s cheap, it’s flimsy, and it’s pretty good in front of the camera 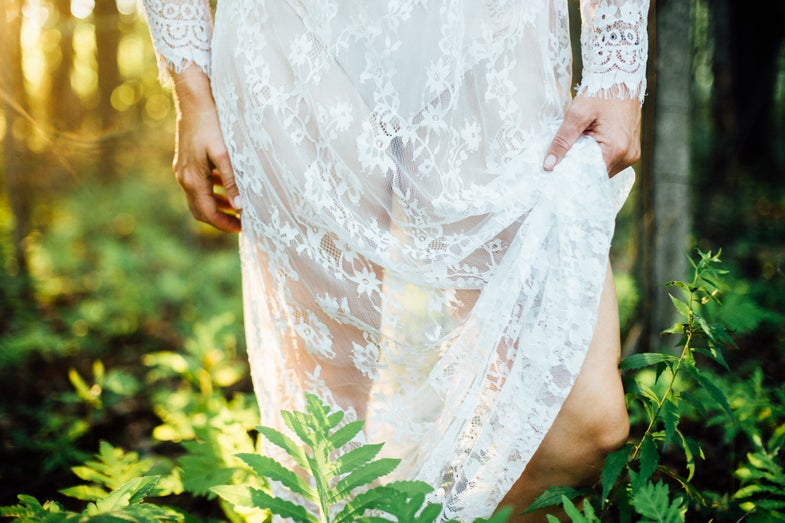 If you’re a member of any online portrait, wedding, or maternity photo groups online, you have probably seen photos of this dress. I had seen it—or others like it—but I wasn’t aware of just how large a following it had until I saw a few discussions on the Mastin Labs user group on Facebook (which has quite a few talented photographers). I casually mentioned it to a friend of mine and she admitted she had a small stack of them at her apartment to use during portrait and maternity sessions. This $15 lace gown—which is sometimes referred to as “The Dress”—has amassed an impressive status with some photographers, so I ordered one in order to give it a try.

There are a couple different versions of The Dress online, but this one seems to be one of the most popular. It ranges from $15 to $18 depending on the size you order and the company that does the fulfillment. I would actually err on the smaller side to make it form-fitting since the high waist isn’t always flattering if it doesn’t fit snugly. The model for the picture in this post is of average height with a strong, athletic build, and the medium size still seemed a little loose.

It comes packed flat in an envelope since the material doesn’t take up much room. I ordered a medium as I didn’t have a particular model in mind, and several women who tried it on said it actually fit like they would expect a medium to fit, despite the warning on the website about it possibly running small. However, this seems like the kind of product that’s susceptible to variance depending on what size you choose or what vendor actually fulfills the order.

Right out of the bag, it doesn’t look all that elegant.

Ultimately, it feels a bit like a doily that you might find on your grandma’s coffee table. The threads are thin and it can look a bit scraggly if you get in tight on the details, but none of that should be surprising. Once you step back, many of the imperfections fade away. It loves to get snagged on sticks and branches when walking through the woods, but we didn’t experience any major tears, just a few broken strings.

How does it look in photographs?

Backlight really can make this cheap dress shine. Literally. If you hit it with backlight it glows in the frame. It almost looks like a sheer fabric, but it still maintains some of the detail from the lace pattern. The fade from in-focus to out-of-focus creates a nice effect if you’re using shallow depth of field.

It looks like it should have a flowing quality about it and it will blow around a bit, but it’s not what I would call billowy and it doesn’t trail like a big wedding dress might. That said, it could totally work as a cheap wedding dress under the right circumstances.

How see-through is it?

The dress has a lot of negative space, but despite its lacy nature, it does a surprisingly good job in terms of nipple coverage. I personally have nothing against nipples of any kind, but several other large social networks certainly seem to, so it’s something to consider. The closer you get, the more obvious the sheer nature becomes, and visibility is also affected by other factors such as the amount of differentiation in your model’s skin tone. It can’t hurt to keep some pasties on hand if it’s a big concern.

The rest of the dress provides a lot less coverage, so if you want to keep your images safe for social media, it’s advisable that the model wear bottoms. The bottoms will definitely be visible, though, so it’s a creative decision that needs a bit of consideration.

Is it worth it?

The Dress certainly won’t appeal to every client, but for such a low price, it really does beg to be used to try things. It would probably be great in water or even dyed to match a desired color. I’ve seen some truly beautiful maternity work done with the dress and I’ve already had a maternity client contact me about using it in the days between the first shoot and the time of this writing. Is it super original? Not really, especially now that I’m blowing up its spot a bit (sorry about that), but it can work really well if it fits the aesthetic that you and your subject are looking for. And hey, even if you hate it, it was only about the price of dinner at Chipotle.