Stargazing has never been so much fun. Curious observers and photographers alike will love our advice for finding the best telescope to buy now. 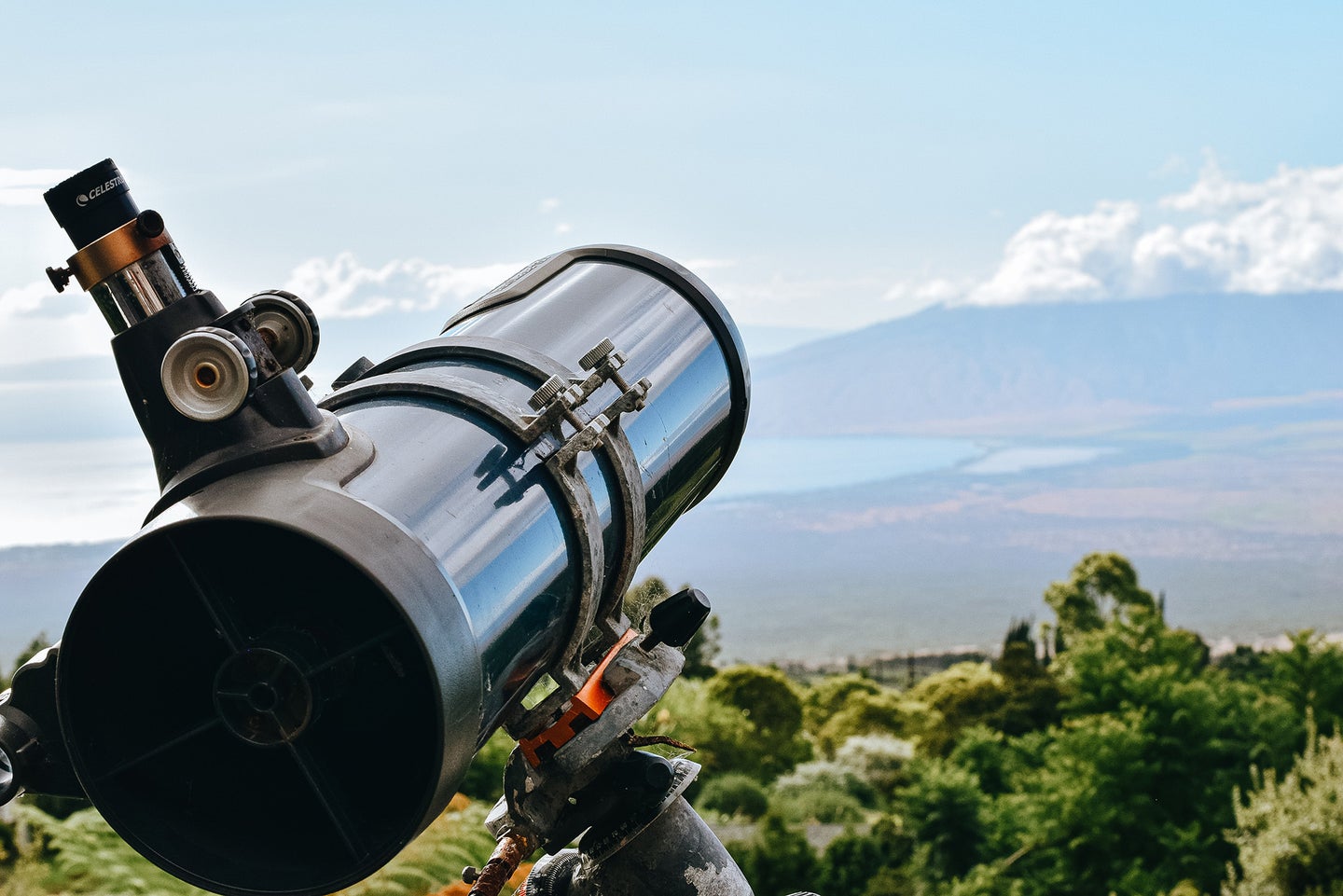 See more by being able to see further. Tim Gouw via Unsplash
SHARE

What we know as the telescope started out as a patent for a device that was meant “for seeing things far away things as if they were nearby,” in the Netherlands in 1608. The patent was filed by an eyeglass maker who conceived of the process of using concave lenses to magnify objects. Two years later, an Italian guy by the name of Galileo would apply the device in the study of astronomy, and, well, it proved to be a pretty significant help to his work.

Telescopes enjoy kind of a rare space among primarily scientific tools. Unlike other instruments and devices, the telescope has a playful side in addition to a practical one. There are high-end telescopes made for serious observers, and there are play-friendly kids telescopes designed just to spark the imagination. With a newly re-energized interest in space exploration thanks to recent SpaceX and NASA Mars rover launches, now is the perfect time to get reacquainted with our celestial neighbors

Wondering what the best telescope is for you? Let us help

For a device that has a simple basic function—making things far away appear close—there’s actually a lot of variety in how they are built, operated, and utilized. When you’re in the market for a new telescope (or a first one), consider how you intend to use it and what you’d really like to get out of it.

Are you shopping for astrophotography tools?

Astrophotography, as the name implies, is when you utilize the scope not just for stargazing but to photograph stars as well as other celestial events such as comets, meteors, and eclipses. As photography has advanced, and extended exposure times became possible, people were able to capture astro images in much finer detail and analyze time-lapses of events as they occurred, which was a boon to the field. Not bad considering the very first instance of astrophotography was a simple, grainy image of the moon taken in the mid-1800s.

The practice of astrophotography almost mirrors that of the computer. The earliest and most powerful devices were room-sized monstrosities meant only for serious scientific use. But as the technology advanced and the ability to capture super hi-res images became as commonplace as sending a text, smaller consumer models got in on the fun as well. So if you want to go beyond being an observer of heavenly activity and want to start documenting what you see, here’s a great astrophotography telescope option.

A telescope for the slightly more experienced stargazer, the Celestron Astromaster comes with a tracking equatorial mount that allows for longer-exposure astrophotography, and its larger aperture captures greater detail. It’s the perfect package for anyone serious about taking up astrophotography, just note that its Newtonian reflector system needs to be carefully adjusted (a process called “collimating”) to operate well, and it takes practice to master.

Getting the optimal view through a refractor telescope

Before we get into what to look for in a refractor telescope, it’s important to understand what that is. Essentially, there are two major types of telescopes: Refractor and reflector. The main difference between refractors and reflectors is that the former uses optical lenses, and the latter uses mirrors. The refractor telescopes have lenses inside long tubes that bend (or “refract”) light to a single point of focus. This is how the earliest models were designed, such as the ones Galileo used (they basically work the same way a simple magnifying glass does). Most modern scientific telescopes are reflectors because their size doesn’t allow them to use the smaller aperture of the refractor, and they’re more capable of handling the large mirrors required to “bounce” the image to the eyepiece.

There are pros and cons to each, of course, with some debate as to which version reproduces the best image. Refractor telescopes often suffer from what is known as “chromatic aberration,” which is essentially a rainbow-like halo around the image. It was Isaac Newton who found that using mirrors reduced the rainbow effect and produced a cleaner image; however, the mirrors do reduce the amount of light coming through, which can result in slightly less detail. Not to mention the mirrors need to be cleaned and maintained frequently.

The German-designed Gskyer features multi-coated anti-reflection lenses that decrease image distortion and its 90mm aperture provides excellent brightness levels. The stainless steel tripod feels stable and strong, but the body itself is made of lightweight and portable aluminum. It’s easy to assemble and built to last.

Are you looking to encourage a budding young astronomer?

Small telescopes have been a staple for science-loving kids for decades. All you need is a window and a clear night and you can have hours of enjoyment. Of course, nothing can quash that enjoyment more than an overly complicated design loaded with prohibitively sensitive instruments. You want something the kid can use whenever they want to, without anything impeding their curiosity. Luckily, because the telescope is so perfect for inspiring young minds, there are a lot of options for simple, small ones that are easy to use but won’t skimp on delivering celestial delights.

A small, kid-friendly introduction to the wonders of the night sky Amazon

Weighing in at just 16 ounces and constructed with a brightly colored purple-and-green scope that kids will love, the Moonscope kids’ telescope is the perfect entry-level, small telescope that still delivers quality images. Its scope features 18x and 90x magnifications, and 4 mm and 20 mm all-glass eyepieces; plus, the set comes with finder scope, tripod, and 22-page journal for recording observances and guiding kids on when and where to look. It’s the best telescope for kids and a great addition to a young-astronomer starter kit.

Want a telescope to add to your camping gear?

Finding a dark night sky to view stars around our homes is becoming harder and harder. Often the light pollution from cars, street lights, and businesses make stargazing impossible. Investing in a stationary telescope requires you to have the right surroundings to make quality viewing possible. If you are in a busy city, or even surrounded by trees, you won’t be in ideal circumstances. A great option to consider in this case is a portable telescope, one that you can pack for camping trips, beach trips, or drives to national parks.

The best portable telescopes give you the flexibility to view the stars from anywhere. They need to be lightweight, easy to assemble, and powerful enough to view the cosmos. Large telescopes may offer some amazing views, but they’re heavy and not realistic for trips. There’s a variety of styles when it comes to choosing the best telescope to lug around: For example, you can find both refractor and Dobsonian telescopes that are small and powerful enough to take on the go. You want to be sure the aperture is wide enough for clear viewing, and that the model offers a variety of eyepieces with different degrees of magnification. Tripods are essential for setting up your portable telescope, and standard altazimuth mounts tend to be easier than equatorial options. If offered, cases and folding features can also make your portable telescope easier to move about.

A great option for a high-powered, computerized telescope that’s light enough to take everywhere. The Celestron uses a computerized SkyAlign alignment technology and StarPointer Finderscope, which guide you through the setup and alignment process so you can get started fast.

By the time you’ve decided you’re ready for a telescope, you’ve probably already spent time studying the cosmos, but that doesn’t necessarily mean you have advanced training and understanding of the technical aspects of telescopes. The best options for beginners offer you a chance to explore the night sky without the headache of an overly complicated machine.

Dobsonian telescopes are considered a great option for beginners because of their simple design, affordable price, light-gathering abilities, and ease of use. Popularized by namesake John Dobson in 1965, Dobsonian models use a design introduced by Sir Isaac Newton. A Newtonian reflector (a large concave mirror that directs incoming light to a smaller flat mirror, then into the eyepiece) offers a relatively inexpensive way to gather light and see details in the cosmos.

This 8-inch, collapsible Dobsonian is a great choice for beginners. With a collapsible design and full weight (including base) of only 40 pounds, this beginner telescope is portable. It comes with accessories such as a 2-inch crayford-style focuser, two wide-angle eyepieces, and 8×50 right-angle finder scope.

If you have a limited budget, it’s still possible to get a device that allows you to see the cosmos crisply. Typically, a reflector style—one that uses mirrors—costs less than a refractor. In the budget category, you will typically find smaller, less-powerful telescopes that don’t offer all the bells and whistles (like computerized mounts and built-in GPS). Smaller telescopes have a smaller aperture, which still allows you to see but with slightly less detail. Often these smaller, less expensive models are marketed for beginners or people who are interested in exploring the night sky but not ready to invest a huge chunk of change.

A great budget option, this Orion telescope offers beginner astronomers a 3-inch aperture (76mm), which allows for viewing details of the moons, planets, and star clusters. An adjustable aluminum tripod and equatorial mount, as well as two telescope eyepieces, are included. Additional eyepieces can be ordered as needed. If you’ve ever wondered “what size telescope do I need to see the rings of Saturn?” rest easy knowing that this one gets the job done, the view will just be small.

What size telescope do I need to see the rings of Saturn?

The rings of Saturn cannot be seen by binoculars but should be apparent in the right conditions (when the air is still) by even the smallest telescopes at 25x (magnification of 25 times). We recommend at least a 3-inch aperture (76 mm) to gain a pleasing view. The larger the telescope and the more magnification available, the more details it will be possible to see. Just note: The larger you go, the more cumbersome and expensive things will get.

Do I need an expensive telescope to enjoy astronomy?

You do not need to worry about making a major financial investment in your telescope in order to enjoy stargazing. The use of mirrors inside a telescope (i.e. reflector-style) gives a lot of viewing power without breaking the bank.

Is buying a telescope worth it?

Yes! Deciding to own a telescope is an investment in your advanced interest in astronomy (or even just your casual enthusiasm). Being able to see beyond our world is a pretty amazing thrill, one that often puts many of our earthly problems in perspective. While there are simpler ways to begin exploring the night sky, once you’ve mastered the basics, owning your own is a pretty cool tool to advance your understanding of our universe.

Time to go out and find your best telescope

There is a surprisingly broad range of functionality and purpose behind the seemingly simple telescope, and you can find options that appeal to the casual observer and the serious scientist alike. Deciding which one suits your needs means taking into account things like user-friendliness, portability, image quality, and overall price. From classic refractor lenses to more sophisticated reflector-lens systems and astrophotography capabilities, there is an option that will get you stargazing for years to come.

The largest digital camera ever made for stargazing