What looks like a deer, is the size of a rabbit, and was just photographed for the first time in decades?

A Vietnamese mouse-deer was captured on a camera trap in the mountains of Southeast Asia. 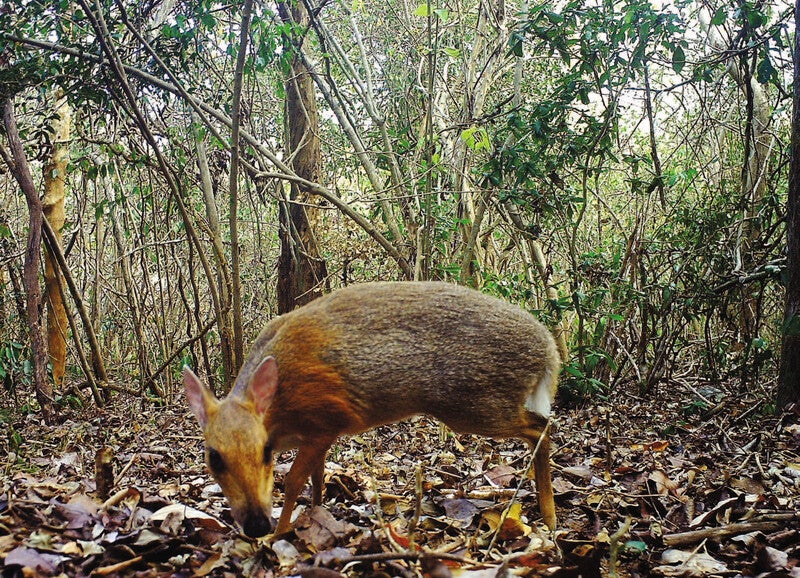 This little guy has been MIA from scientific knowledge for the past 30 years. Southern Institute of Ecology/Global Wildlife Conservation?Leibniz Institute for Zoo and Wildlife Research/NCNP
SHARE

A mysterious fanged creature called the silver-backed chevrotain, or Vietnamese mouse-deer, made a surprising reappearance on a camera trap in the mountains of Southeast Asia. The shy, tiny creature, which has distinctive gray fur on its back, had been unseen by scientists for at least 30 years.

The species had evaded the spotlight in the rugged Greater Annamites of north Vietnam until last spring, when scientists from Global Wildlife Conservation (GWC) and local universities captured hard footage of the rabbit-sized critter scampering through the undergrowth. They published a description of the find in Nature Ecology and Evolution this week.

According to a press release from GWC there are 10 known species of chevrotain mainly in Asia, and none of them are mice or deer. Instead, they’re classified as the world’s smallest hoofed mammals (a.k.a. ungulates), weighing in at less than about 10 pounds. Typical prey includes fruits and other plants—the fangs, you see, are more for infighting; typical predators include leopards and pythons.

The Vietnamese mouse-deer was one of GWC’s most sought-after lost species. Researchers already noted a decline in population numbers between the late 1970s and ‘90s due to hunting, the paper reports. The trend only got worse in the mid-’90s, as deforestation and increased wire-snare hunting plagued the Greater Annamites.

But as journalist Erin Ross noted on Twitter, the chevrotain never went completely extinct. It was merely “lost to science” and re-found after researchers dug through piles camera-trap photos and happened to stumble on multiple individuals. They then set up new cameras with tips from Vietnamese villagers and rangers and gathered nearly 2,000 images of the mouse-deer.

“For so long this species has seemingly only existed as part of our imagination,” An Nguyen, the expedition team leader, stated in the press release. “Discovering that it is, indeed, still out there, is the first step in ensuring we don’t lose it again, and we’re moving quickly now to figure out how best to protect it.”