And they tell an amazing story about amphibian evolution. 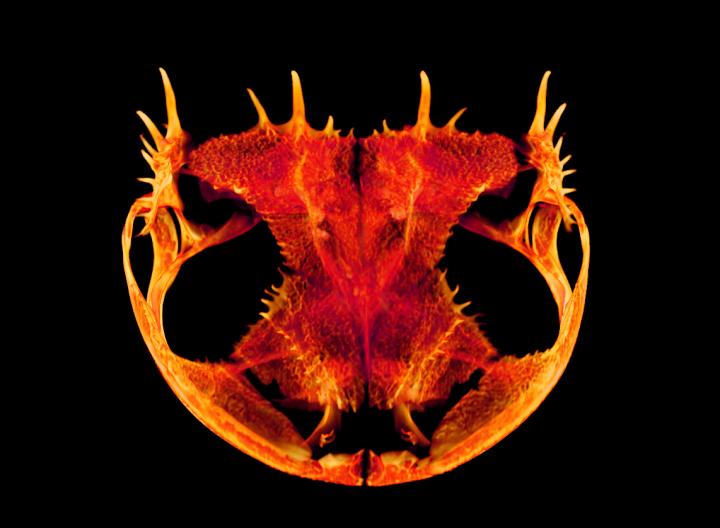 Some frogs, like the Anotheca spinosa, developed spikes on their skull to possibly keep away predators. Edward Stanley
SHARE

Some frogs love the water; some prefer dry land. Some are colored to stick out, some to blend in. There are nearly 5,000 different species of frogs hopping, croaking, and swimming across the Earth of all different shapes and sizes. But one thing that unites most of them is a smooth, simple skull shape, giving them the classic froggy face we’ve all come to recognize.

Yet some frogs have evolved skulls that look more like crazy dinosaur fossils than your average Kermit. A process called hyperossification allows extra layers of bone to grow on parts of their skulls, creating anything from grooves or ridges to bony spikes or fangs.

Researchers have known for a long time about the select groups of amphibians that have these unusual skulls, but it wasn’t previously clear how these subgroups ended up this way. A new study in PNAS has found that not only one branch of frog has a crazy skull—the trait has evolved independently in different families of frogs over two dozen times.

“We found that the trait has evolved over 25 times in the frog tree of life, and is often associated with really extreme shaped skulls,” says author Daniel Paluh, a fourth-year Ph.D. student at the University of Florida. Paluh and his co-authors looked at x-ray scans of 158 species representing all 54 described frog families. They found that very different species shared similar eating or burrowing patterns as well as skull shapes.

The shovel-nosed frog, Australian turtle frog, and the Mexican burrowing toad aren’t close cousins at all and aren’t likely to be spotted hanging out close to each other on the globe. Yet, all three of these frogs have tall skulls with a pointed snout, Paluh says.

While these three funky-looking critters call different continents home, they are all burrowing specialists, and spend a lot of time underground hunting ants and termites, he says.

Hyperossification also appears for species that are voracious predators, like Pacman frogs, African bullfrogs, or Soloman Island frogs. These fierce hunters aren’t known to have much in common evolution-wise. Still, they all have a similarly weird skull with bony fangs that allows them to snag pretty large prey, including other vertebrates. Frogs aren’t known to have teeth on their lower jaw, so these fangs come in handy when it comes to swallowing a tasty bird, mammal or reptile for dinner.

“There are a subset of these vertebrate predators that have evolved these bony fangs on the lower jaw, which aren’t true teeth. They are just bony projections,” Paluh says. Other frogs, like the Mexican spike frog, have developed pointy skull spines which can act as a defense mechanism against predators.

In previous work done in the 90s by Harvard herpetologist James Hanken, hyperossification was previously predicted to be associated with miniaturization. But this new study has found the skull shaping trait in teensy frogs, all the way up to the Beezlebufo (a.k.a. the devil frog), the biggest frog ever known. This Cretaceous-era croaker had a bite force strong enough to chow down on small dinosaurs.

While the discovery of hyperossification and crazy skulls aren’t new, what is groundbreaking is making the associations between behavior and shared traits across far away species, both geographically and evolutionarily, Hanken says.

“They’ve been able to assess all of these traits across a lot of these species and finally assess correlations,” Hanken says.

For University of Berkeley amphibian expert David Wake, the most interesting bit is how many ways different frogs can use their skulls, be it for protection, burrowing, or snacking. “The diversity of these skulls is really quite amazing,” he says.

But looking at skulls is the easy part. The data we need next comes from actually watching the frogs go about their lives to better understand their ecology and evolution. Instead of just looking at what’s inside their head, biologists need to get a better look at how they use them out in the wild.