A prehistoric beetle got caught in a sticky situation. Millions of years later, it’s helping scientists understand the first flowers. 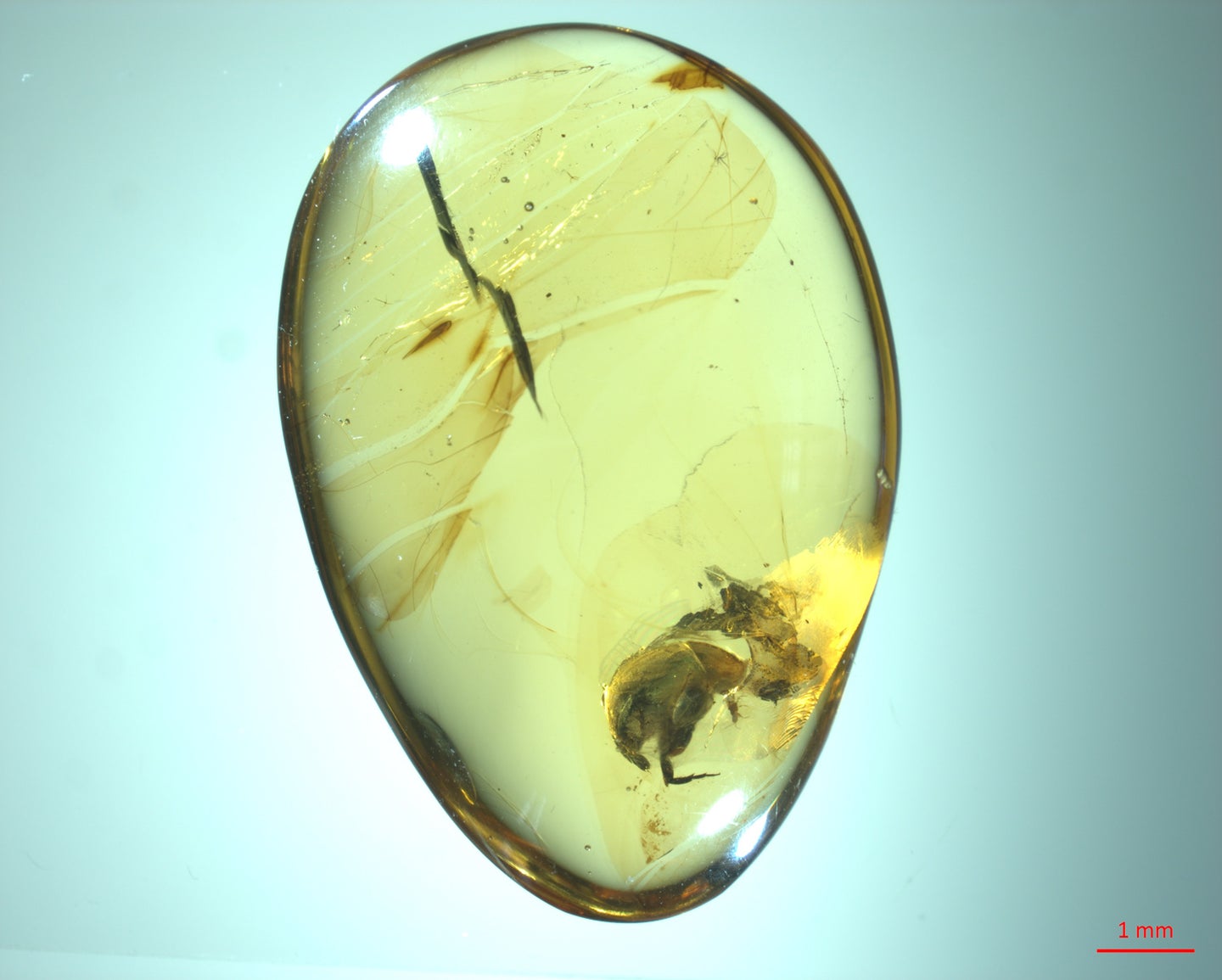 Amber fossils have the power to preserve organisms in amazing detail. Courtesy of Bo Wang
SHARE

99 million years ago, the world looked very different. It was the middle of the Cretacious period. Dinosaurs roamed the Earth in herds. Ancient carnivorous birds were experimenting with flight. The forests were lush and green, filled with shrubby cycads and fan-leafed ginkgos. And—for the first time in Earth’s history—flowers were blooming.

At some point, a tiny beetle happened to visit one of those flowers. Then, covered in tiny flecks of prehistoric pollen, this unlucky insect landed on the wrong tree and got caught in an avalanche of resin. In the ensuing millenia, that resin hardened into amber. According to a study published on Monday in the journal PNAS, that pollen-covered beetle has helped fill a significant gap in the fossil record, deepening the history of insect pollination by nearly 50 million years.

“[This fossil is] finally showing us what we had hypothesized, or what we thought must be,” says David Dilcher, a paleobiologist and emeritus professor at Indiana university. Prior to this discovery, there had not been any fossilized evidence of the early relationship between plants and insects.

Dilcher has spent the past five decades searching for “the first flower in the world.” To put it slightly less poetically, Dilcher is working to decode the origin and evolution of flowering plants—a narrative in which insects are indispensable players.

In 1998, Dilcher helped describe what may be one of the earliest known flowers, Archaefructus, a plant from the early Cretaceous period with an elongated stem and no petals. Other flowers that went on to flourish in the mid-Cretaceous looked similar to magnolias, buttercups, and laurels (but were also nothing like them). These simple blooms soon saw an explosion of diversity.

Even as Dilcher discovered these fossilized flowers, he knew there was more to the story—a bigger picture that he couldn’t illustrate with flowers alone. “We said, ‘Well, these must be there to attract animals,’” he says, “but we never had the proof that animals did visit them.”

A few years ago, Dilcher was at an “amber conference,” where he was approached by paleontologist and future collaborator Bo Wang. Wang showed him a piece of amber containing an insect covered in pollen, and Dilcher knew that this was the proof he needed. This tiny trapped beetle had a curved, wedge-shaped body, a downturned head, and strong hind legs. It wasn’t accidentally covered in pollen—this is what its body was built for.

This relationship kicked off millions of years of coevolution. Flowers quickly evolved to display pretty colors as if to say, ‘Here I am, aren’t I beautiful?’ They developed nice fragrances and sweet nectar with the same goal. Insects couldn’t help but take notice of this attractive sweet-smelling display that offered food and a cozy place to mate or rest. And in the process, they also swept up and carried pollen, allowing flowers to disperse their genetic material and diversify at a very rapid pace.

From carnations to corpse flowers, the sheer diversity of blooms that exist today proves that this strategy was successful. Flowering plants dominate the world with more than 300,000 known species, spread across almost all climates.

“You might say, ‘Who is more clever, plants or animals?’” asks Dilcher. “Well, I think the plants have won out.”