The world’s first folding PC is up for pre-orders. Here’s what to know. 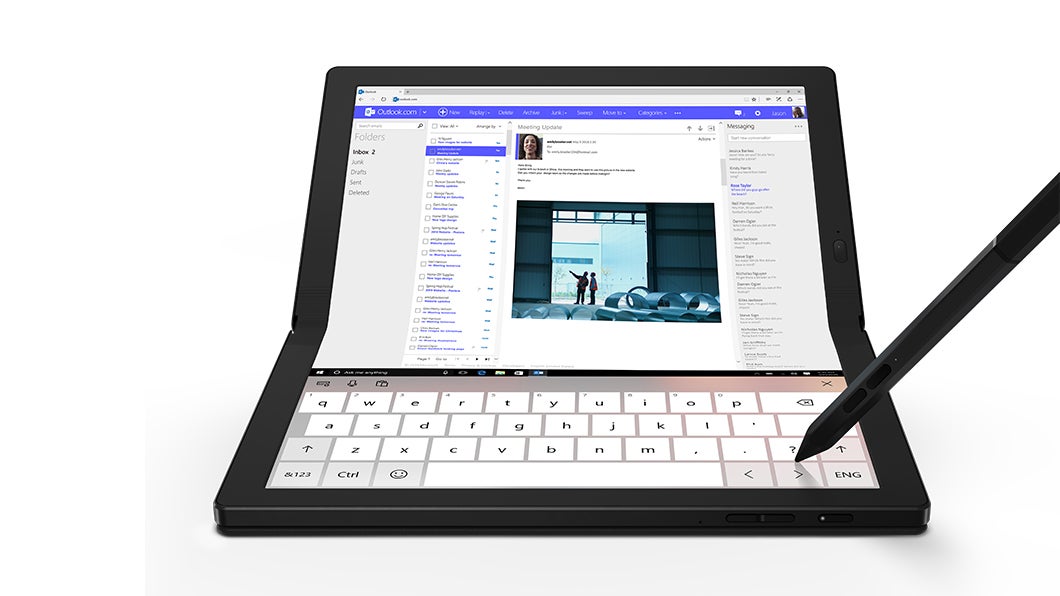 The hinge holds the display at any angle. Lenovo
SHARE

We first encountered Lenovo’s ThinkPad X1 Fold this past January at the Consumer Electronics Show. It was still clearly a prototype at the time, but now the company is ready to start selling the production version—and it appears to have come a long way since January.

Fully open, the X1 Fold looks like a 13.3-inch tablet. Lenovo worked with LG to create the folding OLED display; the surface isn’t glass like the new Samsung Galaxy Fold 2, but Lenovo claims that makes it “more comfortable” to write on when you’re using a stylus. The OLED panel itself sits under four layers of protective material, which combine with a carbon fiber plate for durability. The company says that makes the screen’s toughness comparable to its burly ThinkPad laptops.

Unlike the Galaxy Fold or Microsoft’s Surface Duo devices, the ThinkPad X1 Fold runs a full version of Windows 10 instead of Android. In other words, it’s a folding computer, not a folding phone. It also uses an Intel Lakefield Core processor with Intel Hybrid Technology. The company clearly hopes it will work as a true laptop replacement for users who buy it.

One catch: The machine can’t truly replace a laptop without a physical keyboard, so Lenovo built one that connects to the X1 Fold via Bluetooth and snaps magnetically onto the bottom part of the display when it’s in laptop orientation. Users can simply fold the X1 around the laptop for storage and transportation. The computer will also directly charge the keyboard while it’s attached so you don’t have to plug it in separately. According to Lenovo, you’ll get about eight hours of use from four hours of charging.

As with any folding device, Lenovo has put ample attention on the hinge itself. According to the company, it holds more than 50 individual patents pertaining to the X1 Fold, most of which have to do with the hinge that helps it open and close. Internal tests suggest the hinge is rated for at least 30,000 actuations.

The hinge will hold the device open at any angle, but it locks into place using a tongue-in-groove system for when you want it to stay completely flat. A built-in kickstand on the outside of the device allows it to prop itself up for when you want to use the entire screen with an external keyboard and mouse.

It’s available for pre-order now for $2,499, which isn’t cheap, but also isn’t that far beyond the $2,000 smartphones like the Galaxy Fold 2. Buying into the first generation of a folding product is a gamble—especially when it’s meant to replace your main work device. But, Lenovo has a long track record of making ThinkPads as tough as bricks. Only time will tell if that toughness translates here.