The design features make a big difference when it comes to everyday usage. 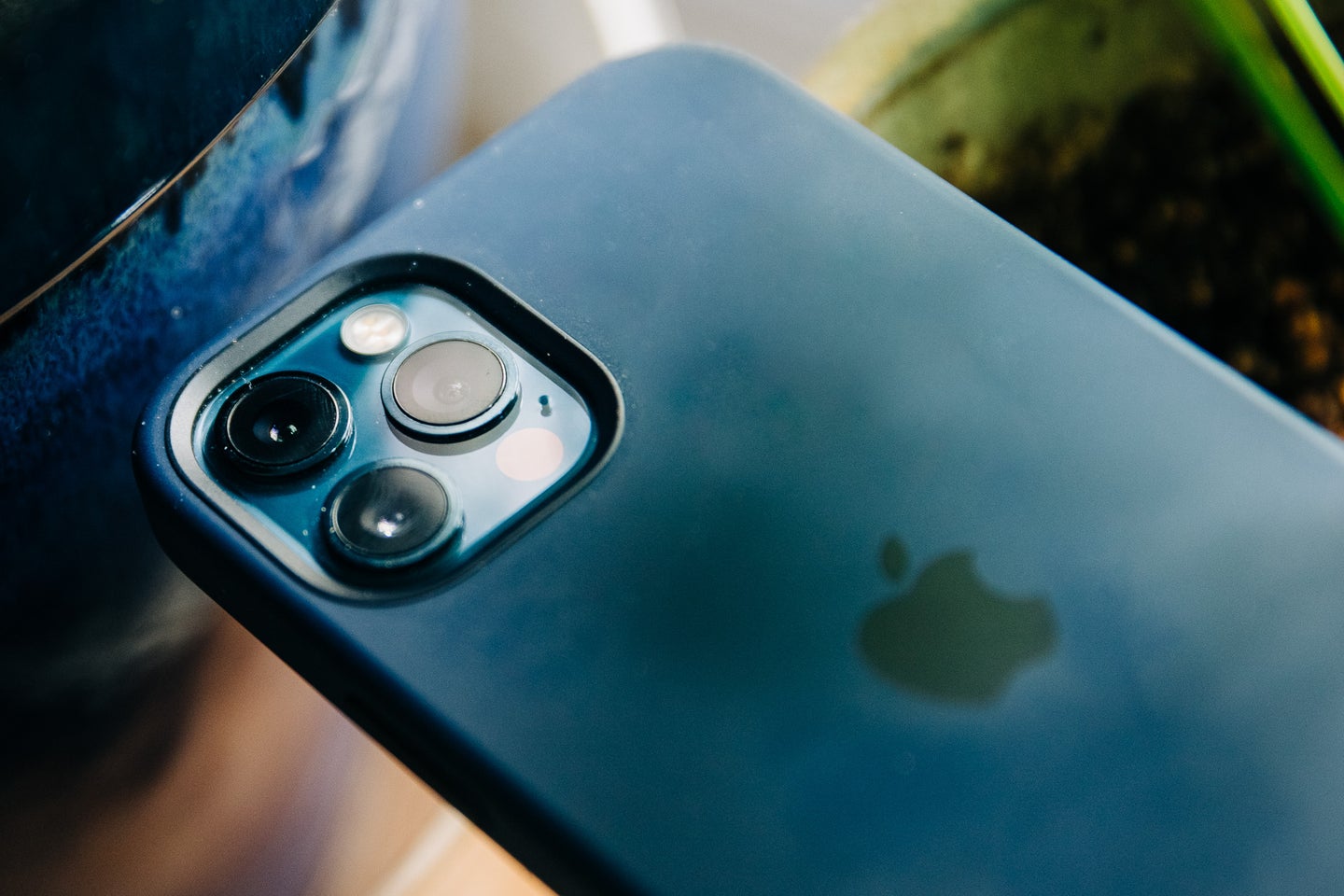 The three-camera array includes a wide-angle, a telephoto, and a super-wide angle as well as a LiDar sensor that helps with autofocus in dim light. Stan Horaczek
SHARE

Back in 2008, when Steve Jobs announced the iPhone 3G, it was a big leap for the device. The update meant that Apple’s smartphones could break free of its exclusive relationship with AT&T and its somewhat lackluster EDGE network and reach new speeds on the “next gen” 3G mobile data network. Then, the iPhone 5 was the first to make the jump to 4G LTE in 2012. And now, with the iPhone 12 and 12 Pro, we’ve entered the era of 5G.

That next-gen connectivity dominates the headlines for the iPhone 12 series. Verizon has gone as far as to say that the iPhone has made 5G “real.” In truth, unless you live in some very specific areas around the country, the 5G connectivity likely won’t affect your overall smartphone experience all that much—at least for now. But, the iPhone 12—and the 12 Pro, which I’ll be focusing on in this review—have received some excellent hardware upgrades that provide a better justification to upgrade for most people than that little 5G in the top right corner of the display.

Let’s start with the hardware

This is the first iPhone in several generations that feels noticeably different from its immediate predecessors when you pick it up. The squared edges harken back to the days of the iPhone 4 when you heard Katy Perry’s “California Girls” on the radio over and over again because Spotify hadn’t come to the U.S. yet. Frankly, I like the flat sides better than the bulging, rounded edges from an aesthetic perspective. More importantly, I also think it makes the device nicer to hold. I tend to press my finger firmly into the side of the phone when I’m holding it to doom scroll or watch content, and the flat edge is much more comfortable.

The iPhone 12 Pro’s 6.1-inch screen is bigger than the 5.8-inch display found on the 11 Pro, despite keeping the overall device size basically the same. The 12 Pro slightly ups the overall resolution and brings the pixel density up to 460 ppi from 458 ppi. Your eyeballs won’t specifically notice that little bit of extra density, but it’s indicative of the fact that the 12 Pro has a really beautiful OLED display.

On top of that pretty new screen, Apple has introduced a new ceramic “shield” developed with Corning (the maker of Gorilla Glass) to protect its surface. According to Apple, that makes the 12 series phones four times better at surviving falls without becoming an embarrassing spider web of broken glass. I didn’t intentionally drop test the 12 Pro—there are plenty of YouTube channels dedicated to just that—but I did unintentionally fling my review device roughly 10 feet across my driveway. It landed with a sound that made me physically flinch, but it remained totally unscathed after landing on its back. I was impressed and relieved .

Perhaps the most exciting new feature in the iPhone 12 series lives on the back of the device. Apple’s new MagSafe tech combines wireless charging with an array of surprisingly strong magnets. It allows you to slap your phone onto the charger like you would with an Apple Watch—you just have to get it close and then it snaps into place. As a result, the iPhone 12 has a smaller wireless charging coil in the back, but it works more efficiently because it ensures you put the charger right in the sweet spot every time.

Wireless charging still isn’t as fast as I’d like it to be. Using the included MagSafe charger, you can expect roughly one third of a charge in about 30 minutes. You’d get about 50 percent if you were to go with a speedy wired solution, so there’s a tangible slowdown, even under ideal conditions. That speed also assumes you’re using the official MagSafe charger, which helps you perfectly line up the charging coils. Drop the iPhone 12 on a generic, 5w wireless charger and you might as well be turning a crank on a handheld generator to slowly fill it up with happy electrons.

But this is the first generation of MagSafe and the cool features go beyond the simple charging. Cases now attach via magnet, which allows them to loosen their death grip on the edges of your device. Apple even introduced a first-party magnetic wallet that easily slaps onto the back of the phone and holds on surprisingly snugly. It takes some actual effort to yank it off of there.

Some analysts speculate that MagSafe is a big step toward an eventual iPhone with no ports at all. Instead of moving the iPhone to USB-C from Lightning like it did with the iPad, it can just get rid of the socket completely. Smaller smartphone manufacturers have already given it a try. MagSafe would need to gain much wider adoption before a wholesale switch makes any real sense for consumers, but it could definitely happen down the road and I’m cautiously optimistic about the prospect.

Yeah, but what about 5G?

5G networks are gaining tons of momentum here in the U.S., especially now that Apple is onboard. In reality, though, the service is still getting off the ground in many places. Your experience will vary widely depending on what coverage looks like in your specific area. Here in upstate New York, I can connect to T-Mobile’s 5G service (“The biggest 5G network in the country!” according to the all-caps poster outside the T-Mobile store near my home). While I do see that little 5G icon pop up regularly, my speed tests typically top out in the low double digits.

If you look at the right side of the iPhone 12 Pro, you’ll notice a small patch that looks different than the rest of the device. That’s effectively a window in the stainless steel chassis that allows millimeter wave 5G signals to reach the internal antenna. That mmWave tech is what lets some users hit absurd speeds. Unfortunately, its uses are extremely limited for the moment. You might get a chance to try it if you find a park in a big city or a sports stadium that’s equipped with mmWave equipment. The connections are super-fast, but have very short ranges and often can’t penetrate solid surfaces—hence the little window on the side of the phone.

For now, 5G likely won’t feel all that much different than LTE did on your previous generation iPhone. That’s not a knock against the device, but rather a reminder to temper your expectations in the face of an endless onslaught of mobile carrier ads promising eyeball-melting speeds.

Even though the actual connections aren’t revolutionary, the 12 Pro does provide a snappier overall experience than its predecessor. The new A14 processor offers hardware upgrades at just about every single point on the spec sheet and you really can feel it when you’re moving around the device—even if the difference is slight. I put it through a litany of tests on resource-hungry apps with advanced graphics and lots of on-screen action, and it didn’t flinch. At this point, though, I really didn’t expect any different.

Overall, I was surprised to notice a difference in speed across the board. Typically, that kind of improvement is more noticeable with a higher refresh rate screen, which Apple decided not to include in this iPhone generation. But, even without that smooth motion on screen, you’ll likely see improvement, especially if you’re jumping in from an older model.

We shouldn’t expect smartphone cameras to change all that much from a hardware standpoint as we move from generation to generation. Apple has made some physical upgrades in the iPhone 12 Pro, however. The lens aperture now opens to f/1.6 instead of f/1.8 to let in more light (smaller numbers coincide with larger physical lens openings).

The 12 Pro also now has a lidar sensor built into the camera array. Like in the iPad Pro, that extra sensor comes in very handy for tasks like augmented reality that rely on the device’s ability to create a 3D representation of your physical space so it can insert a digital Ikea couch into your house or whatever other AR task you’re trying to accomplish. In the 12 Pro that laser sensor also assists the camera’s autofocus system in low-light situations. Cameras rely on contrast and object edges to find the right focus in a scene and that gets tricky when the light gets really dim. The lidar really does seem to help in this regard.

From a pure image quality standpoint, you shouldn’t expect drastically different performance out of the 12 Pro. The resulting images are extremely sharp and detailed thanks to Apple’s Deep Fusion tech, which analyzes a scene and emphasizes the textures with contrast for a crisper appearance. The HDR tech still makes most scenes look good and even rescues some tough shooting situations like heavy backlighting by evening out the exposure. I still think the HDR images lack impact in the shadows—Apple seems afraid to lose even the tiniest bit of shadow detail to add any discernible drama. But, now that it’s simpler to adjust the exposure settings in the native camera app, you have a little more control over the look.

From a video standpoint, the iPhone 12 Pro now shoots in Dolby Vision HDR, which promises colorful footage that more closely mimics what you see in prestige TV on your favorite streaming services. Apple is the first to let you shoot and edit Dolby Vision on a smartphone and the footage does look excellent. You may not notice a difference in every situation and you’ll need the latest version of the MacOS to work with the files, so you’ll have to make sure it’s worth your while to turn on HDR video before you fully commit to it.

In short, the iPhone camera is still great. If you want to get the most camera functionality, however, you’ll probably want to wait for the upcoming iPhone 12 Pro Max, which promises a larger sensor that could make a tangible difference in how the images look. We’ll do a much more in-depth camera review of that device when it’s available.

With the better design (at least in my opinion) and the addition of MagSafe, the iPhone 12 Pro makes a better case for an upgrade than recent iPhone versions have. That’s especially true if you’re coming from an older model like the iPhone 7. And, while 5G probably won’t blow your hair back just yet, carriers are working hard to improve their networks, so it will improve over the time that you have the device. Right now, the 12 Pro is the best iPhone you can buy and that difference is bigger than it has been in some time.