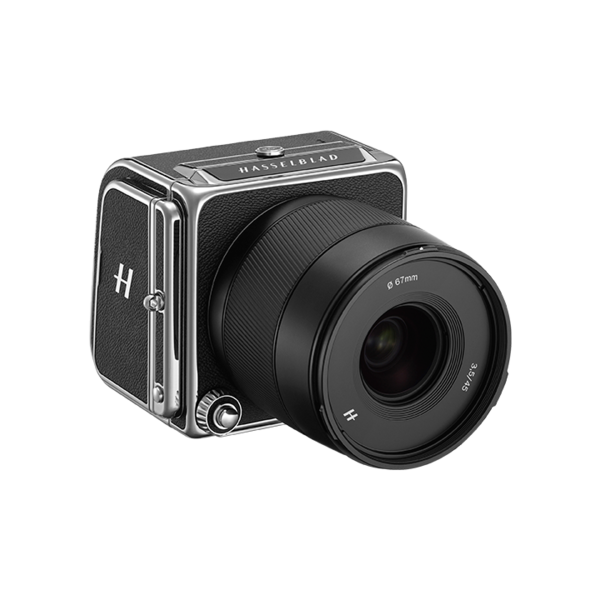 The Hasselblad 970X 50C is actually made up of three parts: a back, a body, and a lens. Hasselblad
SHARE

Modern digital cameras typically have a fixed digital sensor inside to capture light. Medium format systems, like Hasselblad and Phase One, however, work a little differently. They employ digital “backs,” which contain a sensor and attach to a camera body with interchangeable lenses. This practice goes back to the film days—it allowed shooters to swap backs on the fly and switch between different film speeds or between color and black-and-white film.

Hasselblad’s cameras have gained iconic status throughout the decades—they’re the cameras that went on the first moon walk, after all. But, those Hasselblad V cameras are boxy and rather bulky. Now, the company has released a new modular system that pairs the CFV II 50C medium format back—the sensor is larger than the typical “full frame” chips found in pro DSLRs—with a 907X slim body, and its X1D lenses.

Because the body is so slim, there’s no room for an optical viewfinder—the typical V-series cameras employ a mirror that flips up and down as you shoot in order to give you a view through the camera’s lens. Since the 907x 50C is digital, you can simply use the screen on the camera back to compose shots, or opt for the optional optical viewfinder attachment, which fits on top of the camera and uses guidelines to help you line up your image.

The camera itself sports a 50-megapixel sensor, which should look familiar from the X1D mirrorless cameras. It measures 43.8 x 32.9 mm, which makes it more than 65 percent larger than a full-frame chip. It also captures 16-bit raw files, which provide more color information than typical digital camera images.

If you want a more traditional experience, you can purchase attach the back directly to many of Hasselblad’s legacy cameras, some of which are more than 60 years old. You won’t get features like autofocus, but it will give you access to iconic lenses like the 80mm f/2.8 Planar, which I personally consider one of the most beautiful pieces of photographic optics you can buy.

Other manufacturers have made cameras similar to this one. Recently, Capture One introduced its Landscape-specific XT series camera system, which employs a similarly slim body to attach a lens mount and digital back. In that case, however, the electronics reside in the lens mount itself rather than the body.

Looking back in Hasselblad’s history, the company has also produced some camera bodies without mirrors on its own. The Hasselblad Flex Body, for instance, didn’t have a mirror box, but it did provide tilting and shifting functions to allow photographers to mess with the plane of focus and field of view. Those are still available, but remain prohibitively expensive considering their specialized use.

If you want a 970X body with a CFV II 50C back, you can expect to pay $6,400 before you have a lens to actually shoot with. Getting glass is going to cost you another $1,099 at least. That’s not cheap, but we’re also not talking about a standard DSLR here. After all, it wasn’t that long ago that getting into medium format digital started around the same price point as a nice family sedan. If you want to upgrade the camera, you can add the $740 control grip as well as the $500 optical finder.