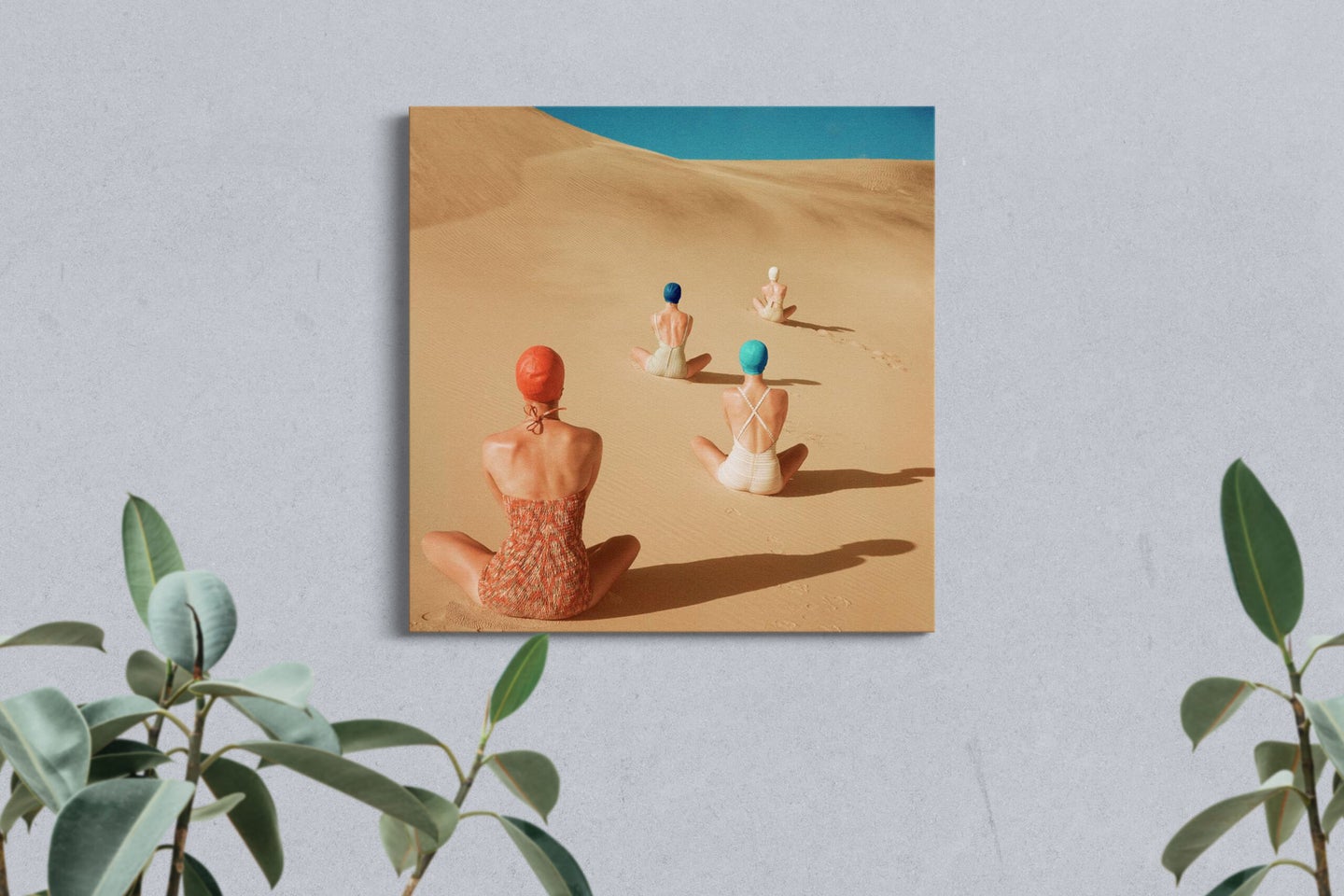 You probably have a running list of your all-time favorite photographers. But is their work hanging in your home?

When it comes to wall decor ideas, professional photographer Andrew French keeps his guidance super-simple: Buy what you like.

“Put up on the wall what you like to see every day,” he says. “Choose something that gives you pleasure, makes you happy or feel good or have gratitude, or makes you think.”

The good news is that you don’t have to spend big bucks to build your photography collection. Sites like Fine Art America make it easy to browse—and shop—millions of iconic photographs.

French suggests picking images that reflect or reference the room that they’re hanging in. For example, you might want to place a series of beach or ocean landscapes in the bathroom, while a cheeky chef portrait might brighten up a kitchen.

You can also sneak in your personal snaps with the masters in a gallery wall. Just make sure that your work shares the same qualities as the famous images, like similar lighting, content, or composition, he adds.

Shop his top 10 picks for photographs that are worth blowing up big—and taking home.

The Divers by George Hoyningen-Huene

“Visually everything about this is a winner,” French says. “From the light to the composition, to the tonality, to the contrast—it’s stunning.”

French is drawn to the simplicity and the implied narrative of the image from Russian-America fashion photographer Hoyningen-Huene. As the figures look into the distance, the viewer is struck by what might happen next.

This photograph could work in any room, French says. He suggests selecting images by theme (beach shots, sports, magazine covers, people looking away from the camera) and arranging them into a quad grid.

French loves the story behind this image. Ansel Adams, the most important landscape photographer of the 20th century, only had seconds to expose this photograph. “This is a delicious picture,” French says. “There is light. It is thoughtful. It is provocative. It is contemplative.”

“We were sailing southward along the highway not far from Espanola when I glanced to the left and saw an extraordinary situation—an inevitable photograph!” Adams wrote in Examples: The Making of 40 Photographs.

Adams’s assistant at the time, John Sexton, says that in 1941 Adams was 39 years old and in peak physical condition. “He was well practiced in every motion, and the time that it takes to make a duplicate negative, to replace the slide, reverse the film holder, remove the slide and cock the shutter is less than 3 seconds,” Sexton recalls. “Given that the initial exposure was 1 second and the decision to make a duplicate negative occurred then, Ansel was very, very close to missing that image. It is a testament to his skills that we are able to appreciate it today.”

This charming photograph instantly transports you to a different era. A doorman in a regal suit bows down to a dog. With the glow of streetlights in the background, the pair create a graphic silhouette.

“It’s funny without being forced,” says French, who notes that the perspective lines bring the viewer’s eyes right to the dog and doorman. “Everything works for me. It feels like an old Life magazine cover.”

Clifford Coffin’s painterly 1949 photograph originally appeared in Vogue magazine. Four models sit cross-legged on a sand dune, their bathing caps forming balloons of color against the sand, and their backs resemble a row of ancient vases.

“It’s a fun composition and plays with light and shadow,” says French. “Who can resist those color dots?” He suggests hanging this photo up in the bathroom or bedroom. “It’s up to you to decide how the content of the picture relates to the location,” he continues.

Ruth Orkin’s “An American Girl in Italy” has long been a fixture in dorm rooms and homes. It’s an instant conversation starter about feminism and street harassment, but French also calls it “lyrical and iconic.”

Ninalee Craig, who was 23 at the time the photo was taken, told CNN that the photo of her walking with her head held high as men oogle her on the street wasn’t staged. And despite viewer’s assumptions, she wasn’t scared or upset by the attention captured on film. “I was thrilled. I was having the time of my life,” she says.

“It’s multilayered,” French says. “It’s interesting, and it has qualities that stand the test of time.”

German American fashion photographer Horst P. Horst’s experiments with radical and Surrealist compositions, as well as avant-garde techniques such as double exposures, produced some of the most iconic fashion images ever.

In 1939, Horst shot Mainbocher Corset the night he fled Europe as the German army moved to invade France. “It was the last photograph I took in Paris before the war,” Horst recalled. “This photograph is peculiar—for me, it is the essence of that moment. While I was taking it, I was thinking of all that I was leaving behind.” The image of the back of a woman wearing an unraveling corset represents the elegance and fragility of beauty in the face of destruction.

“This image is a little provocative,” says French. “The pools of light are so interesting. The light and dark, the composition, the tonality, the contrast—it’s about the potentiality.”

Horst’s influence on photographers is still strong to this day. Madonna even recreated the corset imagery in her 1990 music video for her song “Vogue.”

“It’s a classic,” says French. “The beauty in the location, the light, and the styling—how could you not love it?”

For nearly 50 years, Aarons captured the cultural landscape of the 1% in America for publications like Town and Country. “Attractive people doing attractive things in attractive places,” was how he once described his practice.

French points out that even though Aaron’s photos look candid, they are in fact highly styled and arranged. Aarons, a former military photographer, shot Kodachrome, which creates a rich color palette that’s hard to recreate with a digital camera.

Pleasures and Terrors of Levitation by Aaron Siskind

Between 1953 and 1956, Siskind photographed divers at Chicago’s Oak Street Beach. “I was walking along the lake in Chicago, and I saw these guys jumping off a diving board,” he said in a 1978 interview. “It was a beautiful Sunday, and I was just walking along with my Rolleiflex. I sat down and started taking pictures of them without knowing exactly what I was doing, only that I was taking pictures of divers. The results didn’t particularly interest me until I looked at one that struck me. This guy was a diver, but he wasn’t a diver. He was levitating as if in a dream state, and then I knew what I was after.”

Silhouetted against the sky, the figures look like they’re in mid-flight. “The metaphor of the image is amazing,” says French. He points out that many contemporary photogs like Herb Ritz also created a series of people jumping.

French has this photo of modern dance trailblazer Martha Graham on display at home. “It’s lyrical,” he says. “It’s so graphic and captures the moment in time.”

This photograph is hanging on French’s wall at home. The scale of the photo fascinates him. “Nature is so small and beautiful in the palm of this hand,” he says. “It’s humbling. It feels like gratitude and reverence at the same time.”

As a lensman, French is drawn to hands in photographs. Even though everyone has a pair, hands are imbued with meaning and metaphor about creation. The isolation on a black background makes the image even more arresting. “For me, hands could even be magical. This image hints at something bigger. It feels like a story.”