The Flashpoint Xplor 300 Pro TTL R2 offers heaps of features and power without much bulk. 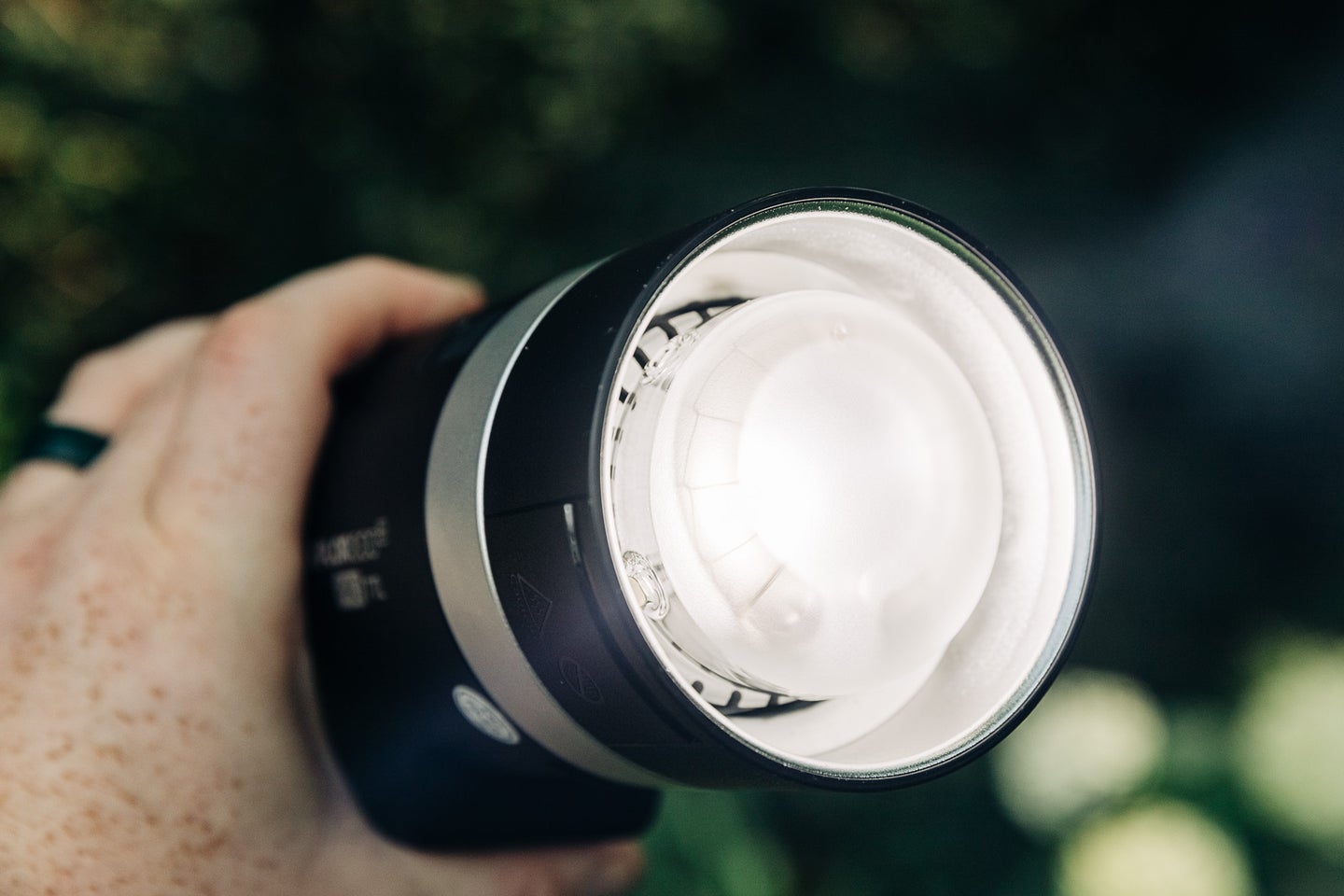 The toughest part of deciding on a battery-powered strobe is balancing size with power. You want enough oomph to let you work in bright sunlight, but you don’t want to lug a massive head out in the field. Flashpoint’s Xplor 300 Pro TTL R2 strikes a solid balance, pumping out an impressive amount of light from a head that’s probably smaller than your biggest zoom lens.

What is the Flashpoint Xplor 300 Pro TTL R2 strobe?

This is a battery-powered strobe that ties in with Adorama’s (Godox’s) radio-based wireless trigger system. It’s compatible with Canon, Nikon, Sony, Olympus, Panasonic, Pentax and Fujifilm camera systems as long as you get the correct transmitter to go with it.

The head weighs just over 3 pounds with the battery installed, and measures 7.5 x 3.8 x 3.4 inches. So, it’s bigger and heavier than a speedlite. At 300 watt-seconds, however, it’s roughly 6 times more powerful than a typical on-camera flash.

From a features perspective, the Xplor 300 has a lot to offer. It does TTL metering, which means it can figure out how much light your scene needs all on its own. That’s handy when you’re shooting in fast action situations and don’t have time to make meticulous adjustments.

High-speed sync allows the Xplor 300 to accommodate shutter speeds as fast as 1/8000th sec, which comes in handy when you’re trying to overpower natural light in bright conditions. You can expect to take a hit when it comes to power and battery consumption, but it works as promised.

This flash crams an impressive number of features into a body that only takes up roughly the same amount of space as a water bottle.

The main body consists of a simple tube with a small fin-style protrusion on the bottom for mounting. It reminds me a lot of the shape embraced by now-defunct action camera company Contour.

The monolithic battery simply slides into the back of the device and clicks into place. There’s no battery cover, which feels slightly odd at first, but makes sense.

Despite its status as a full-fledged monolight, the Xplor 300 doesn’t have a standard socket on the bottom for sitting atop a light stand. Instead, you’ll find a quarter-twenty tripod socket. So, if your light stand doesn’t have a threaded screw on top, you’ll need an adapter.

The monolight also lacks an integrated umbrella mount. Bigger, more powerful units tend to include a hole with a screw to easily insert an umbrella in a hurry. There’s no room for that here, so you’ll have to rely on a dedicated umbrella clamp (which comes in the case).

Mounting quibbles aside, the Xplor 300 feels extremely sturdy and embraces a layout that’s simple to navigate in the field.

As the name suggests, this strobe relies on Adorama’s R2 radio transmission system. I have a lot of experience with this system personally and found that the Xplor 300 fits quickly and easily in with its bigger sibling, the Xplor 600, which I use as my main battery-powered strobe.

The 2.4 Ghz connection performed as I expected, which is to say that it’s strong and reliable. The specs promise more than 300 feet of range (or 100 meters). I tested this at a high-school football field. I had no trouble firing the flash from the opposite end zone using an R2 transmitter.

Of course, a football field provides an excellent setting for uninterrupted transmission. Once you start putting objects between the transmitter and the Xplor 300, you can expect your results to vary.

Before you start firing the flash, you can turn on the Xplor 300’s multi-colored modeling light. You can select between 3,000K (to match tungsten light bulbs) or 6000K (daylight) modes. I appreciate the flexibility because I’ll sometimes use a modeling light as a constant source of illumination in a pinch. The modeling light isn’t exceptionally bright, but it will give you an idea of how light will fall on your subject, which is the point.

I started my test in TTL mode since you’re paying for that extra computing power required to get automatic exposure. I typically prefer to set things up manually so I have control over the situation, but I found the TTL performance more consistent than I expected. Like any TTL system, it can get tricked by an overly bright or dark area of the frame. But, if you need to blast the flash in a hurry without doing any math, you could keep TTL turned on most of the time and get solid results.

Moving to manual felt much more familiar. You can tweak the power by ⅓ stops or 1/10 stops depending on your level of lighting neuroticism. Personally, ⅓ stops work just fine for me in most instances, but you can have more control if you need it.

The Xplor 300 can pump out full-power flashes down to 1/256 second. The flash durations range from 1/220 second all the way down to 1/11,490 second on its lowest power setting. With those durations, it’s more than capable of freezing even the fastest action, even when you have the power turned up relatively high.

It also offers a stroboscopic flash that can pop up to 100 times in a single second. I have always found that to be a cool effect, but I don’t typically have much use for it. It works as promised.

The back of the strobe hosts a number of buttons and dials to help you dial in your settings. It’s a standard set of buttons accompanied by a very readable LCD display. I typically control the flash directly from the transmitter mounted on top of the camera. But, changing your settings directly on the monolight itself doesn’t take much of a learning curve.

If you’re not using a transmitter, you can opt for a 3.5mm direct cable connection or use one of the optical sensors that will fire the flash when they see another strobe go off. Again, these worked as they should, which is good because transmitter batteries tend to die at the least convenient times.

Conditions make a big difference when you’re testing a flash’s batteries. The Xplor 300 TTL promises 320 full-power flashes per charge. While I didn’t sit there and pop away at full blast, I had no trouble shooting for three hours during a fitness photo shoot at a local track.

The battery isn’t quite as robust as you’d find in one of the Xplor’s bigger siblings, but it’s likely plenty to last through most shoots unless they’re real marathons. An extra battery will set you back $69, which is likely a wise investment. Even if you’re good about keeping your cells charged before heading out for a session, all batteries eventually die completely and you’re out of luck without power.

With lights this small, getting your softbox or other modifiers attached can sometimes be a challenge. The Xplor 300 TTL R2 comes with a reflector that mounts directly to the monolight. Optional brackets open up the option to attach Bowens lighting modifiers. I typically rely on diffused umbrellas or small softboxes in the field. So, if you’re planning to buy an Xplor 300, I’d recommend figuring out which modifier you’ll use most and committing to it from the start. That way you’re not spending a ton of cash on different mods.

Who should buy the Flashpoint Xplor 300 Pro TTL R2 monolight?

I’ve been impressed with many of the monolights in the Godox/Flashpoint lineup and the Xplor Pro 300 TTL R2 is no different. At $500, it’s not the cheapest battery-powered strobe option around. If you want a full set of built-in features, though, it offers a very solid mix of power and portability.

If you think you’re going to expand your arsenal down the road, it’s worth digging into the company’s pre-built kits, which sometimes offer big savings. Right now, for instance, you can get two of the Xplor 300 Pro TTL R2 lights with several accessories for $750 total. That’s a big price cut if you can swing the cost.

Ultimately, this light serves as a perfect step up from someone coming from an on-camera speedlite. It offers much more power, but still retains the automatic TTL functionality that you may be used to.