The Return of Cuba: A Photographer’s Exploration

This nearby country is luring more photographers than ever 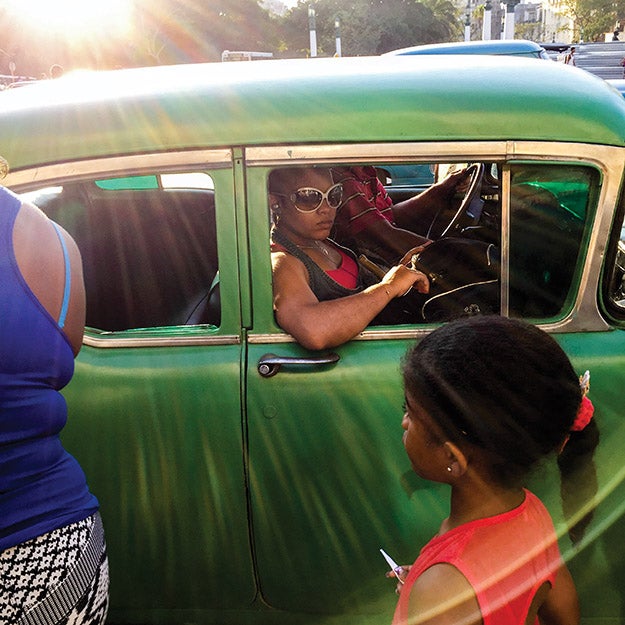 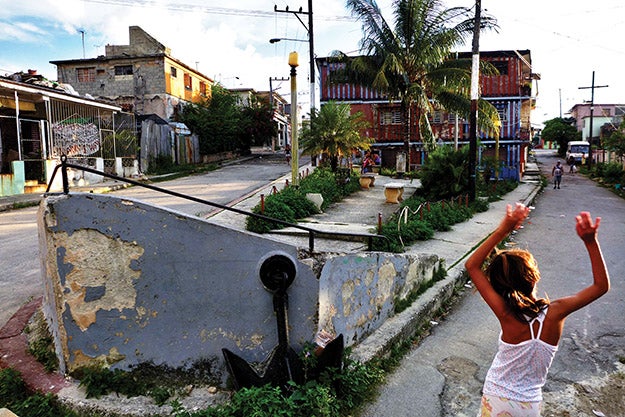 Park transformed in a ship

“This joyfully playing girl is just the kind of reward that Cuba offers photog­raphers who have the patience to wait for it,” says Sven Creutzmann. He photographed the scene below in Havana’s Playa district in 2013.

Of those Americans who benefit from the slowly opening gates to the 42,000-square-mile Caribbean nation of Cuba, photographers can be counted among the grateful. The country’s urban and rural areas seem to have been fixed, as if in amber, since the 1950s. (It’s tantalizing to imagine that some of the same backgrounds available to Walker Evans in the 1930s may still be there today.)

We spoke with four photojournalists who have explored the visual treasures of Cuba collectively for decades. The consensus? Though some Cuban views have become visual clichés—i.e., 60-year-old DeSotos and Spanish colonial architecture—there are many other worthy subjects that should compel American photographers to pack their camera bags and head south.

“Speaking as a photographer, my daily encounters with the Cuban people are pure joy,” says Sven Creutzmann, a freelance photojournalist from Germany who is now based in Cuba. “I don’t know any other country in the world where photographing people is as much fun. The people are so natural and open.” He was immediately drawn to their way of dealing with the hardships of daily life in a nation where basic comforts and amenities of the modern world are often unavailable.

According to Lisette Poole, a freelance photographer based in New York City, whose clients include the New York Times, Wall Street Journal, and Newsweek, “Of course, there’s the color, music, and an intense Caribbean vibe down there, but I’m especially struck by how remarkably prideful, joyous, and present Cubans can be. I had expected to find them depressed and downtrodden, but most often the opposite is true. They carry themselves with an attractive dignity and always make the most of whatever tools they have for enjoying life.” As an example of Cuban openness, Poole mentions frequently encountering people on the street in animated conversation, displaying humor, warmth, and friendly charm, even though the individuals involved were perfect strangers. The opportunities for colorful street shooting are endless. “As a rule, Cubans are comfortable with each other in ways most Americans aren’t,” says Poole.

Eduard Bayer, a Spanish photojournalist based in New York City, also sings the praises of Cuban street life. “It exhibits a vitality and exuberance that’s unique to the island. There’s always a lot going on, so much so that it can be hard to focus on one subject,” he tells us. While Old Havana and the city’s Centro district are crowded with European and Canadian tourists, especially in winter, the vast majority of Cuba is—certainly by Caribbean standards—tourist-free. The spirit of the people, the light, and color are almost always on view; street photographers generally don’t need to worry about keeping tourists out of their backgrounds.

The best news? Cubans typically don’t mind having their picture taken, if you approach them civilly and ask their permission. “Most Cubans are pretty outspoken, and if they don’t want to be photographed, they’ll let you know it as soon as they see your camera,” says Poole. To chip away at any reluctance, she suggests introducing yourself as an American. “We’re still pretty rare down there and it piques their interest to actually meet one of us. Generally Cubans feel culturally connected to the U.S., and almost everyone you meet has a close relative somewhere in America.”

But, warns Creutzmann, if you see people dressed entirely in white, try to avoid taking their pictures. “They most likely will be initiating their life in the Santeria religion which, in the first year, prohibits them of having their photo taken, shaking hands, or getting wet in the rain.”

After some 60 years of blockades, embargoes, and severe travel restrictions, “since January of this year flying into Cuba as a U.S. citizen has become relatively easy,” says Creutzmann. Rules are easing on an almost monthly basis, and the U.S. Departments of State, Treasury, and Commerce are diligently updating their websites to reflect the new freedoms and remaining restrictions. By the time you read this, even more relaxed regulations will likely be in place.

“There are plenty of flights to Cuba every day, especially between Havana and Miami,” says Creutzmann. “You still need to travel under one of 12 licenses, but you don’t have to apply for a permit from the U.S. Treasury Department anymore. When booking flights, you simply check the appropriate category.”

Licenses typically used by photographers include Workshops, Journalism, People-to-People (i.e., cultural), and Family. (Find the complete list on the State Department’s website, state.gov.) Americans are still unable to enter Cuba as simple tourists, but travel agents specializing in the island can help get you there; dozens of agents exist online.

Photo workshops to the island are exploding in number, and they’re also easily found with a quick web search. For first-time, nonprofessional photographers visiting the island, these workshops are highly recommended. One reason: While the détente between Cuba and America moves forward, there are still many places that require government-issued permits to visit and/or shoot. “Even accredited photographers have to apply with the [Cuban] authorities to work in many locations, and the process can be time- and nerve-consuming,” says Creutzmann. Workshop organizers either take care of this paperwork or aim you toward unrestricted venues and subjects. (If you have family in Cuba, workshops may not be necessary to get your footing there.)

One of the pleasures of shooting in Cuba? Its streets are “super safe,” as one of our photographers said. For one thing, there are virtually no handguns among the general populace. “It’s probably the safest country in the Western Hemisphere,” says Creutzmann. “Compared to Rio, Buenos Aires, Mexico City, or São Paulo, it’s a walk in the park.” Another reason to feel at home on these streets: Twenty years ago, it was difficult getting around Cuba without speaking Spanish, but today, especially in and around Havana, more and more Cubans have basic English down thanks to the growing importance of tourism.

After decades of isolation from its northern neighbor, this relatively poor country with few natural resources or man-made exportables presents photographers with unavoidable logistical issues. Photographic equipment, accessories, and memory cards, for example, are difficult to find, even in Havana’s tourist zones. If you’re lucky enough to find a 16MB compact flash card, it will be expensive. While it’s relatively easy to charge batteries in Cuba, finding chargers or batteries (other than AA and AAA alkalines) can be difficult. “Bring in everything” was a mantra among these photographers.

Communicating with the outer world is also a challenge. The web is still something of an unknown in Cuba. There are state-run Internet cafes (ETECSA shops), but expect long lines and high costs. “Travelers have best Internet access in the larger hotels at costs up to $8 U.S. per-hour,” says Creutzmann. “And recently the Cuban government installed 35 Wi-Fi hot spots all over the country in public areas which you can access by buying Wi-Fi credits from ETECSA shops. A plus: You won’t incur roaming charges using American-based cell phones.

First-time visitors are often flummoxed by Cuba’s dual currencies. In 2004, Cuba banned the American dollar, replacing it with the convertible Cuban peso, known by its acronym CUC. Worth slightly more than the U.S. dollar, it’s used by foreign tourists and businesses to purchase (largely) foreign-made goods at prices significantly higher than international norms. The Cuban national peso, or CUP, which is worth slightly less than the U.S. dollar, is used by native Cubans to purchase subsidized food and household goods, at prices far below international norms.

For money, change your cash to CUCs and bring lots. Cuba isn’t an inexpensive country for foreigners, and American credit cards aren’t accepted (yet). Eduard Bayer suggests that as you travel the island, bargain with taxi drivers—public transportation is unreliable—before getting in a cab, because they’re notorious for overcharging.

Warning: There’s also currently no GPS signal beamed to Cuba, so Siri can’t help you get around. “There are, however, tour and guide services everywhere in Cuba, because such a huge chunk of their economy revolves around tourism,” says Michael Christopher Brown, a Magnum photographer also based in New York City.

Don’t let these hassles discourage you from a Cuban excursion. “It can be hard to get good food at times and the heat can be unbearable,” says Lisette Poole, “but the rewards for me are endless.” Cuba is a nation that’s lived cut off from most of the Western world for decades, and the chance to capture that unique situation in photos will not last for long. Get there before there’s a Starbucks and McDonald’s on every block, and you will have experience—and capture—something really remarkable.

Baracoa Near the island’s eastern tip, this city is the oldest Spanish settlement in Cuba. Sven Creutzmann says it offers “overwhelming landscapes and beautiful portrait backdrops.”

Centro Havana Great for street shots, Eduard Bayer says, “It’s the most populated neighborhood in all of Cuba.”

Foxa Building “Try to get to the top of the Foxa in Havana’s Vedado,” says Bayer. “Its views are stunning.”

Holguín A charming city and province on the eastern end of the island, Holguín offers classic Cuban architecture and street scenes along with great sunrises.

Malecon “Havana’s embarcadero will reward a sunset visit and is where colorful locals hang out,” according to Eduard Bayer.

Parque Lenin On Havana’s outskirts, this park is where the city’s youth meet on weekends.

Pinar Del Rio On Cuba’s western tip, it’s the 10th largest city on the island and home to typical examples of Spanish colonial architecture along with rural landscapes.