Relonch Is a Camera With Two Buttons, No Screen, and a Subscription Service to Edit Your Photos

This camera edits your photos for you at $1 each 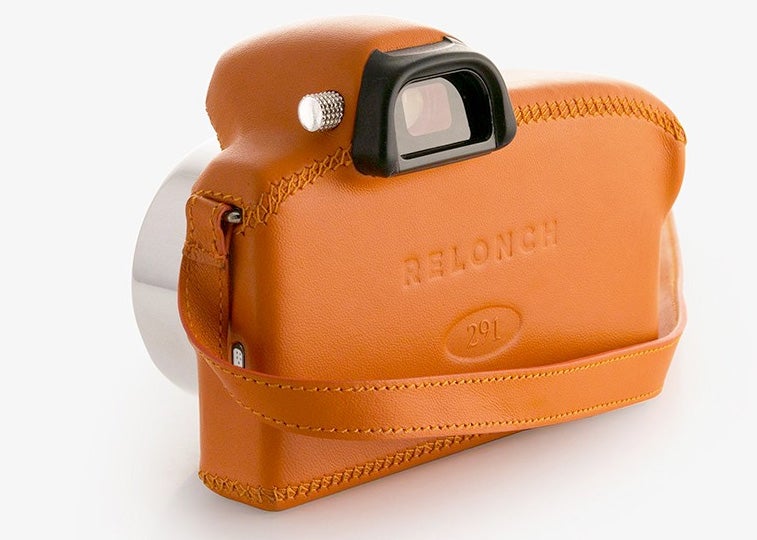 Cruising around the Relonch site is a slightly confusing experience for a person entrenched in the photography world. When I look at a new product, I’m looking for things like specs and a feature list, but Relonch skips almost all of that—on purpose. The idea is basically that you use the super-minimal, leather-wrapped camera to shoot photos, then (for a fee) your photos are edited and sent back to your phone so they can be shared.

The Relonch site goes out of its way to say that it was designed by people who aren’t photographers. It’s a fact the product wears like a badge of honor. The camera itself is based on a Samsung NX body, likely because of its readily-available LTE connectivity, which Relonch uses to beam photos to its mothership after they’re taken. The camera itself only has two buttons—one for power and another to take the picture. The rest of the body is wrapped in brightly-colored leather, so you can’t see the screens or controls or any of the other stuff you expect to find on a camera. It even has a fixed prime lens on the front so you can’t zoom or swap.

Once you take a picture, it flies out via the built-in cellular connection where it’s then presumably edited by a person or an algorithm. The sample images on the site take the editing a bit overboard in my opinion. There’s lots of contrast and bright colors, but they also add things like midtone contrast and—sigh—vignetting to make the images look more finished.

The pricing on the service is a bit hard to parse. If you look in the “Plan” section of the site, it suggests that it costs $1 per photo that ends up getting the editing treatment, but it doesn’t seem like all your photos get it. The company also prints you a book of your best photos every month. The whole thing seems very odd. You can “test drive” the camera if you’re in the California area, but if you sign up now, you won’t actually get one until 2018.

I feel like anything that gets people interested in photography has the potential to be a good thing, but if this model appeals to people, I’d suggest buying a film point-and-shoot film camera to carry around. Some are very high-quality, such as the Olympus Epic or the Konica Big Mini, and you can get them used for around $100 to $150. A roll of 36 pictures costs about $18 to $19 including film, processing, scanning, and shipping if you use a service like The Darkroom or Find Lab, so you’d actually get more pictures while still getting that whole “pure” feel of few buttons and no real processing.