An impressive photo printer with lots of versatility. 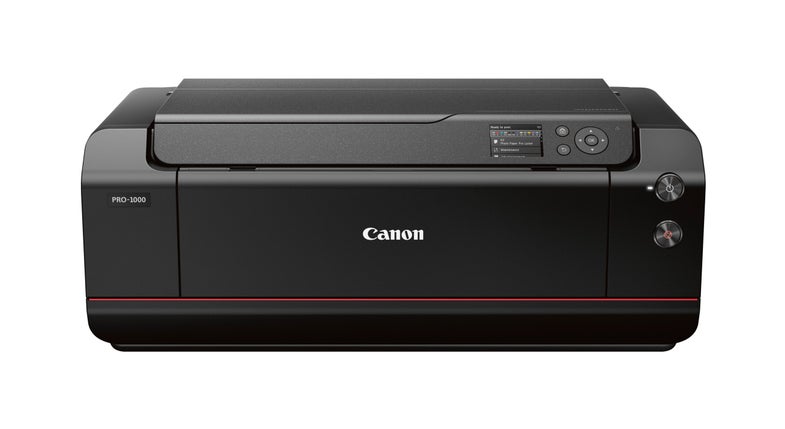 When Canon announced its new imagePrograf Pro-1000 this fall, we were excited to see another addition to the world of professional desktop printers. Until 2015, we’d seen very little development there: A little less than a year ago Epson rolled out its 17-inch SureColor P800, the company’s first release since 2011’s Stylus Pro 3880. And until Canon announced the Pro-1000 last fall, its most recent comparable printer was the iPF5100 from way back in 2007. Aside from many updates, this new inkjet is also several hundred dollars less expensive than its distant cousin, retailing for $1,300.

The textured finish and the red line that runs across the front of the Pro-1000, very deliberate design decisions, are meant to remind you of Canon’s L-series lenses. While Canon has used the imagePrograf moniker since 2006, the Pro appellation represents a shift in the company’s approach to making printers that’s evidenced in the dramatic design change. The Pro-1000 is jet-black, sleek, and reminiscent of Canon’s camera aesthetics, whereas its older line of printers adopted a more industrial appearance.

In many ways it is a larger and better-performing version of Canon’s smaller inkjet photo printer, the 13-inch Pixma Pro-1. Both use the same 12-cartridge Lucia inkset, which includes the company’s Chroma Optimizer, though the new printer sports significantly larger tanks. In addition, the Pro-1000’s newly designed print head is 50 percent larger than the one in the Pro-1, packing 18,423 nozzles into 1.28 inches of space. And it can lay down 32 million droplets of ink per second.

We decided to run this new printer through a variety of real-world trials as well as standard color-rendering assessments in the Popular Photography Test Lab.

The imagePrograf Pro-1000 looks great, but is by no means a small device. Your desk will have to accommodate its 28-inch width and support its more than 70-pound weight. When extended, the front tray sticks out some 16 inches from the face of the printer and the rear sheet feeder, when fully opened, adds about another 6 inches to the depth. However, both of these fold unobtrusively in the Pro-1000 when not it use, giving it a neat, unified appearance.

Setup proved fairly painless and straightforward—you can do it yourself, provided you can lift a 70-pound box. Unlike Epson printers, the Pro-1000 ships without its print head installed. Don’t be intimidated, though: Canon makes it installing the head as easy as popping in a new maintenance tank. Downloading the requisite software and drivers is a simple procedure that will most likely take less time than removing the many, many pieces of tape that keep the printer’s various parts from moving during shipping. Be sure to inspect every inch of this printer after unboxing, since you will find small plastic tabs and rectangles of tape in the darnedest places.

Once you connect the Pro-1000 to a computer, working with the printer itself is a simple matter of navigating its pared-down menu options. Unlike some inkjets that bury important functionality within hard-to-find submenus, the Pro-1000 makes essential actions like head-cleaning and color-calibration easy to perform. When working with various paper surfaces and weights, the Canon helpfully alerts users to which of the printer’s feeds should accept the paper. What’s more, selecting a paper type is a breeze compared with Epson’s rather presumptuous system that involves the printer first trying to guess the surface of paper being fed into it. The Pro-1000’s paper selection process has the added advantage of also relying less on proprietary paper types and naming conventions. In fact, Canon specifically designed the printer to easily accommodate papers from a variety of manufacturers, though Canon surely would prefer that users buy its house brand. (We tested the printer’s performance on several surfaces and sizes of Canon paper.) For our print speed tests of the Pro-1000, we connected the printer via a USB 2.0 cable to a 3 GHz Intel Core i3 Apple iMac with 4 GB of RAM and clocked printing times on three standard sizes of Canon’s Plus Semi-Gloss paper. Using Adobe Photoshop CS6, we printed bordered and borderless images at 8.5×11, 13×19 and 17×22 inches on the Pro-1000’s Best (highest-resolution) setting. While we were not unhappy with the speeds at these sizes, they differed substantially from Canon’s stated print times for Canon Pro Luster paper, which we found to be not entirely unlike its Plus Semi-Gloss: Canon lists only that the Pro-1000 can produce a 13×19-inch print in 2.5 minutes and a 17×22 in just over 4 minutes. While this may be true, it may only be possible using the printer’s lower resolution settings. When set to Best mode, we found that the new Canon took just under 6 minutes to yield a 13×19 print and between 7.5 and 8.5 minutes for a 17×22-inch print on average. See the table WHERE for more speed test results.

The Pro-1000 is designed exclusively for use with cut-sheet, not roll paper, and print speeds on this order aren’t a big problem since it’s not intended for high-volume industrial output.

We found only one major hiccup in printing with it. A flap-like door, that feels much like an afterthought, must be closed over the primary paper feed before printing can begin. Our timing tests were interrupted more than once because this flap was not in place, causing us to restart our print queue several times.

Like the Pixma Pro-1 before it, the Pro-1000 uses the 12-color Lucia Pro ink set. One of those cartridges contains a special liquid Canon calls Chroma Optimizer. This is formulated to reduce metamerism, a color shift caused by the reflective properties of glossy papers. After running our timing tests with Canon’s Pro Semi-Gloss paper, we were surprised to have blown through almost a full cartridge of the stuff. Those who prefer glossier papers would to do well to stock up.

Among the other 11 cartridges in the Lucia set are a photo black and a matte black. Both have dedicated ink lines, saving you time and money by keeping the printer from having to flush a single black ink line when changing between photo and matte, as is common in many Epson printers. In the monochromatic department, however, Epson has a leg up on Canon: The Pro-1000 is designed to use its color cartridges in tandem with its monochromatic ones when printing black-and-white images. Sticklers for purely neutral monochrome prints may be let down, but we were impressed with the printer’s ability to render rich blacks.

In the Popular Photography Test Lab, we compared the Pro-1000’s color rendering capabilities with industry-standard color gamuts. Using an X-Rite Eye-One iSis profiling device, we created custom ICC color profiles of Canon’s Pro Premium Matte and Pro Luster papers. We were then able to analyze computer models of each profile’s color space using Apple’s OS X 10.5 ColorSync Utility. For comparison, we put both profiles up against the Adobe 1998 RGB and sRGB color spaces. The former encompasses about 50 percent of visible color while the latter represents only about 35 percent and is reflective of the average computer monitor’s ability to render color.

We were pleased to find that in all cases, both of Canon’s papers exhibited excellent ability to render light-yellow and light-green colors, consistently rendering hues not achievable by either Adobe 1998 or sRGB. Likewise, both papers produced rich dark-greens and dark-blues in addition to vibrant magentas, colors that again exceeded the boundaries of Adobe 1998 and sRGB. Given the results, we were impressed, to say the least. These are beautiful prints and your photos will look much better—with more accurate colors—on such papers than they will on your computer or mobile device.

Canon’s imagePrograf Pro-1000 isn’t the first printer of its kind, but it is a breakthrough for Canon. This printer’s easy set-up, pared-down menu options, print speed, and color rendering capabilities are more than enough to give Epson a run for its money. Plus, innovations like Chroma Optimizer and dedicated lines for black inks should keep competitors on their toes. For photographers looking for a well-priced inkjet photo printer for a small studio or home office, we think this one might just be a silver bullet.