Behind the Scenes: The Photography of Modernist Cuisine

Arguably the best food photographers out there share their secrets 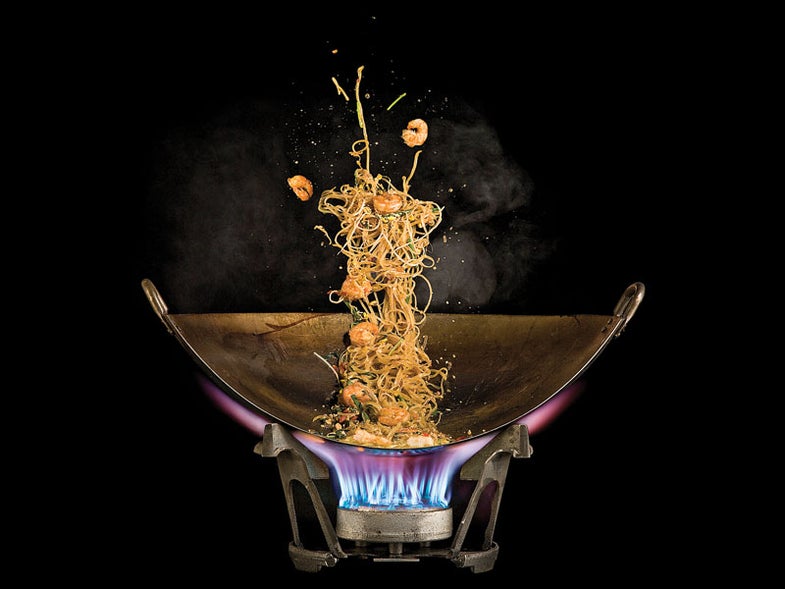 This cutaway of stir-fried pad thai illustrates the technique of dynamically varying cooking time and temperature by controlling the height at which ingredients are tossed or stirred. For stop-action food, Myhrvold and crew typically use high shutter speeds, short flash-duration strobes, and sometimes even shoe-mount flashes. The composite of multiple tosses above included one toss that resulted in a kitchen fire caused by oil spilling out of the cutaway wok.
Photo: Ryan Matthew Smith/Modernist Cuisine LLC.
SHARE

Great food photography whets appetites, sells magazines, and inspires people to cook. But the imagery of the Modernist Cuisine cookbooks does more: It teaches, with plenty of aesthetic impact, too. Now find out how they do it. Click here to order The Photography of Modernist Cuisine

Nathan Myhrvold had a problem. In 2011, this true renaissance man and his co-workers at The Cooking Lab in Bellevue, WA, were preparing to publish their groundbreaking 2,400-page, six-volume, $600 Modernist Cuisine: The Art and Science of Cooking. The book’s futuristic recipes included revolutionary cooking techniques such as spherification and sous-vide—not what you would find in Fannie Farmer. In fact, both the recipes and their preparations can be downright daunting.

His problem? How to draw the casual reader into the books and not scare them off. To solve this, he created a new kind of food photography that piques curiosity at first glance, and then educates at the second. “If you represent a subject so that people can’t quite place it,” he explains, “that automatically draws them into the photo, and, we hope, will hook them into wanting to learn more about the science of food and new cooking techniques.”

Before Modernist Cuisine, the primary purpose of food photography was to make food look mouth-watering or otherwise inviting to eat: a steaming, perfectly browned and seasoned turkey on a Thanksgiving table, or a classic cherry pie on a checkered-cloth picnic table, with the sun-dappled cherry orchard beyond. These images, Myhrvold says, are more about nostalgia and romance than cooking.

So what distinguishes Modernist Cuisine photography from conventional food and cooking imagery? For starters, very few of the images showcase cooked food or finished dishes. The focus is always on cooking technique and ingredients, with backgrounds either pure white or black and totally context-free.

You don’t need a cookbook to tell you that food can be delicious, Myhrvold maintains. That’s a given; we know that. The Modernist approach to cooking and food photography is strictly about how to cook, not why.

This new, admittedly clinical style of food photography has been exhibited in museums from France to Hong Kong to the Smithsonian Institution in Washington, DC. It has drawn enough admirers that The Cooking Lab has published a new book specifically about its imagery: The Photography of Modernist Cuisine. Due in stores as you read this, it’s billed as the first coffee-table-scaled art book about food and cooking. Myhrvold is its chief photographer and author.

The 13-pound, $120 tome has two purposes: To inspire with unique and unusual fine-art food photography, and to explain to interested readers how the images were made. The explanations appear in the form of studio set-up shots and detailed captions found in the back of the book.

Myhrvold and his crew refuse to focus on the obvious, conventional, or clichéd. The book’s cover, for example, is a tight close-up of a tomato that explores with a sharply focused eye the red fruit’s skin and the graphically intriguing design of its stem and calyx. A more unsettling example: A photo in a section on the cooking of pork doesn’t show a beautiful browned and sweating pork chop. Instead, we see colorful, but squirmy photomicrographs of the parasitic worm that causes trichinosis. That’s what Myhrvold means by the “science of cooking” and what distinguishes his aesthetic from that of Martha Stewart or Ina Garten.

“After poring over hundreds of examples, we discovered something funny about food books,” says Myhrvold. “The cookbooks with beautiful images never reveal how their images were made, and the how-to photography books explain ways of shooting food, but their pictures are rarely beautiful or inspiring.”

The Photography of Modernist Cuisine tries to fix this with a satisfying mix of compelling food images and informative how-to. And it succeeds. It’s by far the most edifying and inspiring how-to book on food photography we’ve seen.

Just as the Modernist cooking techniques are cutting edge, so are the photo techniques employed by Myhrvold and his co-photographers. Modernist Cuisine photographers, for example, shoot food at drastically different scales than do typical cookbooks. They shoot the usual studio photographs, with standard lenses and lighting, but they go deeper, too, using macro, super-macro, and even microscopic views. Their super close-ups are presented usually with absolute sharpness thanks to focus stacking during postproduction—again, not something you will find in most food books.

Other advanced photographic techniques include stitched panoramics of food. Their high-speed photography is made possible by both high-frame-rate video cameras such as Visual Research’s Phantom, as well as short-flash-duration studio strobes. Such layered foods as sandwiches are carefully photographed to simulate exploded diagrams, with each ingredient its own layer, shot from slightly different angles.

Nathan Myhrvold is the conceptual force and financial backer for both The Cooking Lab and Modernist Cuisine. Interested in both photography and cooking from his young teens, he was sidetracked professionally but never let go of his culinary passion in the intervening years: He was Microsoft’s chief technology officer and founder of Microsoft Research—a 14-year relationship—from which he took an extended sabbatical in order to acquire a cooking diploma from the well-known French culinary institute in Paris, La Varenne. Asked for suggestions he might offer novice food photographers, Myhrvold says: “Start by finding available-light situations that speak to you. Several pictures in the book, in fact, were taken at open-air farmers’ markets with very simple equipment. Shoot in open shade or filtered light, perhaps using a simple reflector or slight application of flash to open up shadows.”

What about gear? “A serious 1:1 macro lens is nice, but not essential,” he continues. “The most-used lens for this book was the Canon 24­–105mm f/4L [which magnifies only to 1:4.3], because 1:1-type magnification can be too much. It puts your camera close enough to the subject that you’re often blocking your lights.”

As for skills, “develop the ability to compose and light ingredients so you accurately capture their shape, color, and texture,” he advises. Next, move on to small, off-camera shoe-mount flashes and then graduate to studio strobes. “The most important thing to learn about lighting food is not to shine your lights directly at your subjects. Instead, place your lighting so it reflects obliquely off the food’s surfaces.”

Best part of food photography? When you’re finished shooting, you can eat your subjects.

Shooting on Black: One of the studio setups shown in myhrvold’s book, this one is for subjects on black backgrounds. Photo: Chris Hoover/Modernist Cuisine LLC

A. Background
“A yard or two of black velvet from a fabric store makes a fantastic black background that reflects almost no light,” says Myhrvold. “Just make sure you keep your light sources’ output from spilling onto it.”

B. Tabletop
For sexy reflections on a black foreground, use a sheet of black Plexiglas as shown here. For more mirror-like effects, Myhrvold recommends a sheet of glass whose reverse side you’ve spray-painted black.

C. Lights
“When shooting translucent food like this grapefruit, it’s fun to light it from behind,” says Myhrvold. “In microscopy, they call this ‘dark field shooting,’ and for translucent subjects, the light should be hard [no softbox or diffuser] and typically come from the back and at an angle. This technique is frequently used for glass subjects.”

D. Computer station
Myhrvold recommends shooting tethered to a nearby computer. “We love the immediacy of it. You can tweak your lighting in real time, and know when you’ve got the shot. The way you look through a viewfinder is fundamentally different than the way you see with a computer screen.” And in the end, there will be far fewer unpleasant surprises. 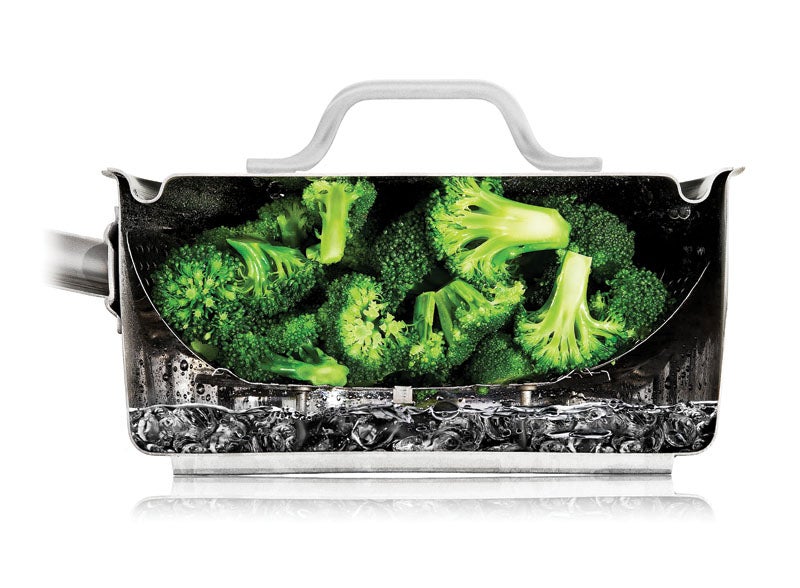 For this cutaway of steaming broccoli, Nathan Myhrvold and his team cut the pot, steamer, and lid each in half using an abrasive waterjet. He held the florets together with toothpicks, and later, in software, added multiple side-on shots of boiling water below.
Photo: Ryan Matthew Smith/Modernist Cuisine LLC 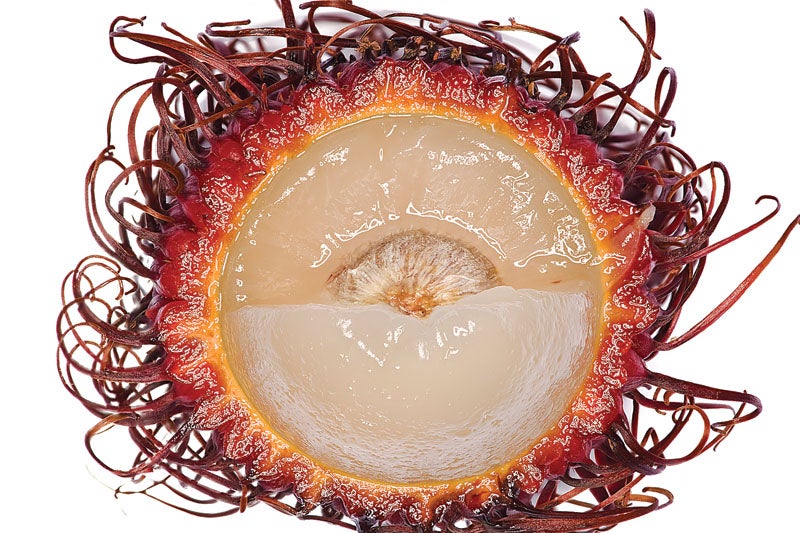 This super-macro image of a rambutan, a tropical fruit approximately two inches in diameter, is a digital composite of about 30 images that were focus-stacked to assure sharpness from front to back. Focus stacking is one of several advanced photographic techniques Myhrvold employed for Modernist Cuisine, and one rarely, if ever, used in conventional cookbooks. Each of the 30 frames captured a different “slice” of the fruit in sharp focus. They were then combined in software, which automatically eliminated the out-of-focus areas of each slice. One of the book’s stacks comprised 1,700 slices.
Photo: Nathan Myhrvold/Modernist Cuisine LLC 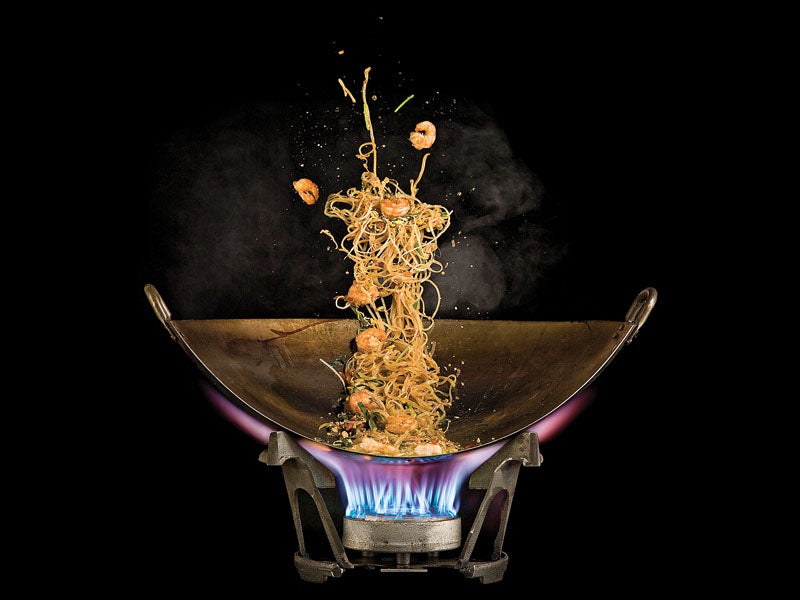 This cutaway of stir-fried pad thai illustrates the technique of dynamically varying cooking time and temperature by controlling the height at which ingredients are tossed or stirred. For stop-action food, Myhrvold and crew typically use high shutter speeds, short flash-duration strobes, and sometimes even shoe-mount flashes. The composite of multiple tosses above included one toss that resulted in a kitchen fire caused by oil spilling out of the cutaway wok.
Photo: Ryan Matthew Smith/Modernist Cuisine LLC 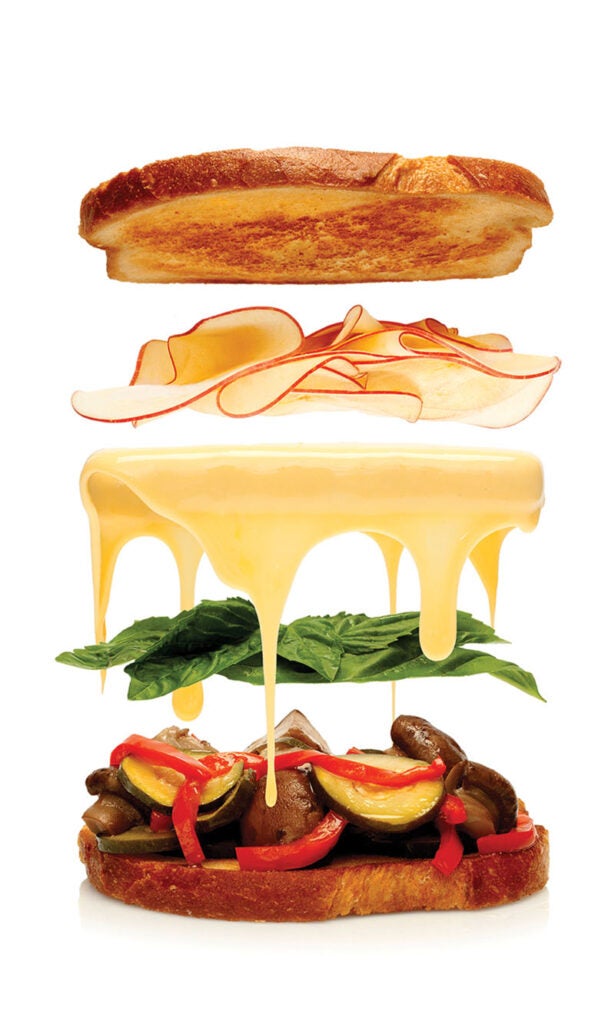 Taking his inspiration from exploded diagrams typically seen in mechanical drawings, Myhrvold and crew produced a number of levitating food shots for the cookbooks. The challenge in producing composites like this grilled cheese sandwich comes in having to shoot each layer from a slightly different angle, with only the central image (here the melting cheese) shot straight on. The image was the cover art for Modernist Cuisine at Home.
Photo: Melissa Lehuta/Modernist Cuisine LLC 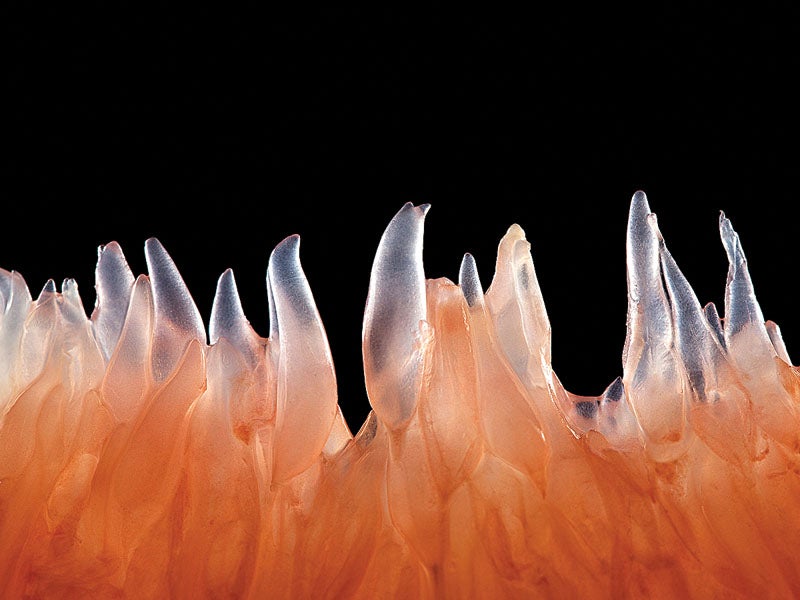 To photograph the tender flesh of a grapefruit slice, Myhrvold and his crew had to remove the tough outer membrane that encapsulates each grapefruit section without disturbing the succulent inner sacs of grapefruit juice. To do it, they soaked the segments in a mixture of commercially available natural enzymes and then gently peeled away the outer membrane. As you learn in the book, “it sloughs away like old skin off a snake.”
Photo: Chris Hoover/Modernist Cuisine LLC 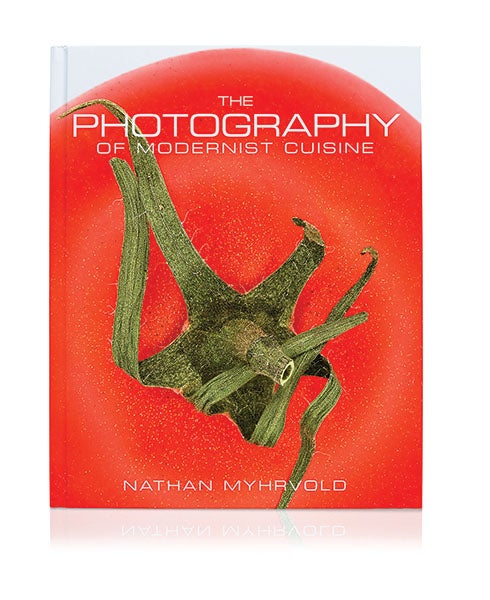 The Photography of the Modernist Cuisine