With a powerful blend of bold color and selective focus, Magda Wasiczek's floral studies conjure up a magical world of fairy tales, spirits, and sprites. 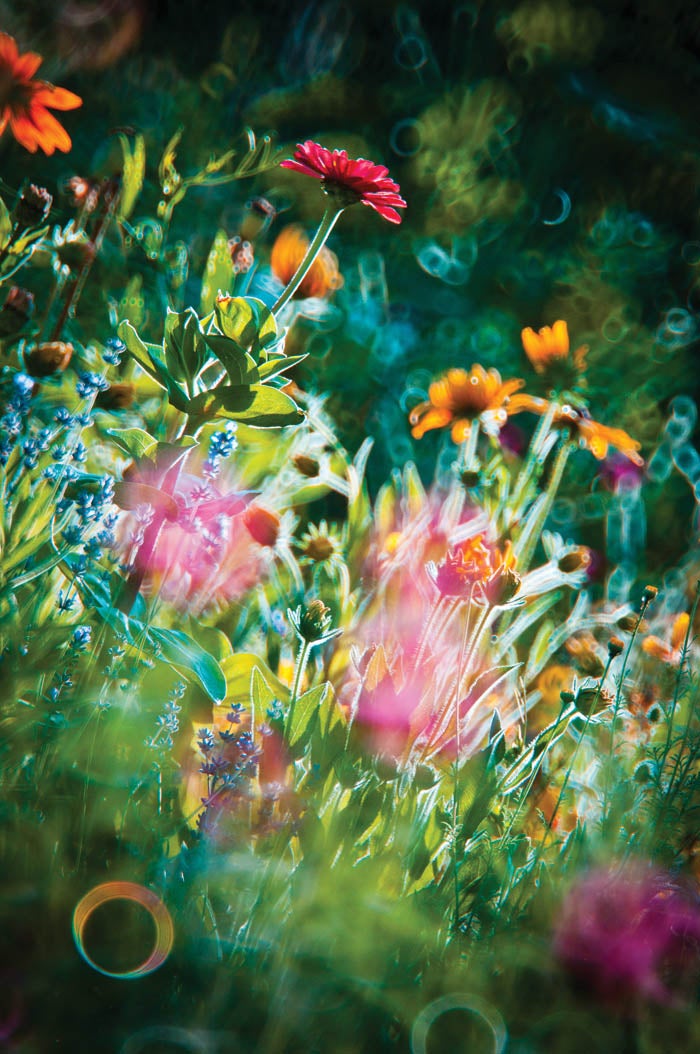 Wasiczek's backgrounds are as interesting as her flowers. Here, she employs her mirror lens' distinctive donut-shaped bokeh. Shot with the Nikon D300 and a Rubinar 300mm f/4.5 mirror lens. Magda Wasiczek
SHARE

Her photographs are floral dreamscapes—ready made for Oberon, Titania, and their sailboats of walnut shells and gardenia petals. And her work has been widely recognized, winning prizes and being shown in books, galleries and magazines around the world. Magda Wasiczek, a self-taught, 40-year-old photographer from southwest Poland, interprets floralscapes with a magical vision that many find all but intoxicating.

Wasiczek’s photographic story started with a 1998 business trip, from which her husband returned with a Nikon N70 film SLR. A gift celebrating the birth of the first of their three children, the N70 quickly became an expressive tool in Wasiczek’s hands. She captured her child’s first years with such sensitivity that soon other parents were hiring her to photograph their kids, and now she’s made a career of it.

As her camera skills improved, Wasiczek made the journey from children’s nurseries to meadows and gardens near her home, where a more unusual photographic vision evolved. “My photos aren’t literal representations of flowers,” she says, “but are the record of impressions that I experience, impressions of color, light, and shape. I look for visual effects to represent those impressions.”

These effects might be background highlights that will defocus into stars, rings, or moons, as well as colors that can be saturated or otherwise tweaked into something otherworldly.

Instead of individual blossoms or tidy bouquets, Wasiczek is drawn to chaotic meadows and gardens with unkempt wildflowers that live up to their name. These are places that evoke memories of dashing around her grandmother’s garden as a child. “I really miss the old picturesque flower gardens with typical Polish natives like mallows, nasturtiums, sunflowers, poppies, and helleniums,” she says. Now everything is mowed, pruned, aligned, and contained, she laments, within neatly trimmed borders.

“When I go into the meadow or garden, I look around. I often sit there to sharpen my eyes,” Wasiczek says. “Within the jungle of grass and plants, I try to find a theme that will inspire me. I soak up the smells of the meadow, its sounds, its light, and I wait. Maybe a butterfly will flap by, or I’ll notice a ladybug climbing a leaf, or drops of dew will sparkle in a shaft of sunlight.”

When this happens, she picks up her camera and plays. Wasiczek’s favorite time is from late afternoon until sunset, mainly for the light. “By nature I am an owl, not a lark, so for me the perfect time is when the low sun of late afternoon beautifully illuminates the plants and gives them warm, golden colors,” she says. She’s inspired by this light, especially after rain.

“The very low-contrast light created by a cloudy, gray sky is also good, but its effect is different,” she continues. “It’s best for making bright, pastel photos. I don’t like strong sun, and the only thing that will draw me out of the house at noon is a flock of butterflies passing through.” Wasiczek avoids flash, and prefers to reflect ambient light onto backlit or shadowed subjects with a compliment of small reflectors and mirrors.

As much as she likes the golden hour, Wasiczek will also wake before dawn to shoot. In these moments, insects are just stirring and not as likely to fly off, and dew drops put on amazing light shows. “On mornings bathed in dew, the flowers look like they’re studded with diamonds that shine in the first rays of the sun. The views of this spectacular phenomenon can be breathtaking, but they’re not for sleepers. In summer, you have to be up and out on the meadow by 4 a.m. Otherwise, you miss it,” she warns.

She rarely mounts camera on a tripod, and her technique is loose and freeform. As noted, Wascizek starts by sitting, and then stretching out prone among the greenery. Unlike most flower specialists, she eschews knee pads or ground cloths, and “when I return from the meadow, I look like a mud man,” she laughs. Her point of view is usually at or below floral level, and she quite often tilts her camera to add dynamic lines to flower stems and horizons.

Wasiczek treats her own garden as a laboratory for her photography, nurturing flowers she remembers from her childhood and planting butterfly bushes, sweet peas, and other flowering species that attract the photogenic insects like dragonflies, lady bugs, and butterflies that often “co-star” with the flowers in her photos. “In my garden, everything is interwoven and tangled, and at first sight may seem like a chaotic mess. But for me, it’s an artistic mess!” she exclaims. Such chaos contrasts starkly with the simplicity, purity and beauty of her subjects, and, defocused, it can make for visually dynamic backgrounds as well.

In fact, Wasiczek’s backgrounds often threaten to upstage her subjects with their mysterious depths, rich colors, and graphic energy. She almost always includes visually stimulating swirls or swaths of pure, saturated color that contrast—sometimes dramatically and sometimes subtly—with the blossoms in her foregrounds.

If the photographer can’t find an angle that presents such a background, she will drag a brightly colored plastic toy, ball or other object behind her subject, making sure it’s far back and completely defocused. Her favorites are objects with reflective metal elements, which she places in good light so they appear as bright background highlights in the imagethat suggest distant moons or lamps of a nearby dwelling.

She achieves these backgrounds, of course, by shooting mostly with fast macro lenses and shooting at or near maximum aperture. The result is shallow depth of field, and deep planes of mysterious defocus before and behind her subjects. “Shooting at f/2.8, the biggest difficulty is catching the right focus. It requires a lot of patience, and taking several shots [while bracketing focus] to make sure I have a good one,” she says.

Another dimension to Wasiczek’s flower pictures grows out of her creative use of atmospherics to convey something intimately sensual about her garden and its mise en scene. More than most flower shooters, she’s drawn to frost, mist, dew, snow, falling rain, wind, and fog for the way they communicate feelings of wet, motion, chill, or warmth. The elements add an almost physical immediacy, while hinting at the photographer’s unwillingness to let a bit of inclement weather stand between her and great photographs.

Wasiczek’s color palette is unabashedly unnatural. Her violets are rarely violet, but showcase colors tweaked and twisted by the sensitive application of select Adobe Photoshop Lightroom tools. She dynamically plays the effects of saturation, white balance, tint, hue, contrast, and vibrance sliders off each other until the overall color scheme works. “It can take five or twenty minutes to get the look I want. Often when I fiddle longer than that, the picture usually gets worse, and will ultimately end up in the trash can,” she laughs.

“I have no special Lightroom tricks or techniques,” she sighs. “I simply play.” 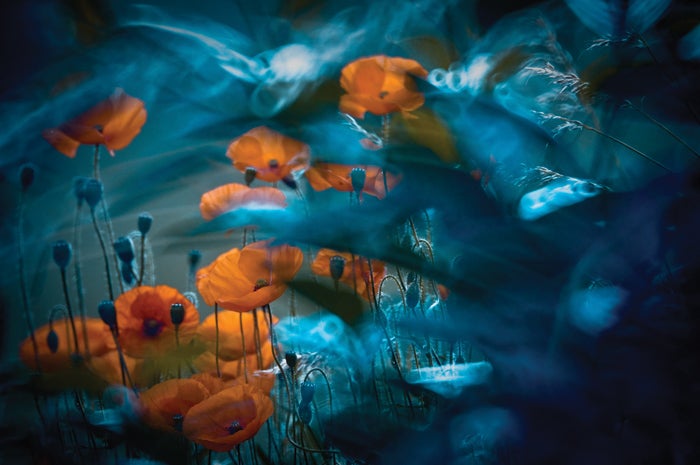 Wind in the Weeds

Unlike most flower specialists, Wasiczek doesn’t shy away from wind. Made with a Nikon D300 and Rubinar 300mm f/4.5 mirror lens; exposure unrecorded. 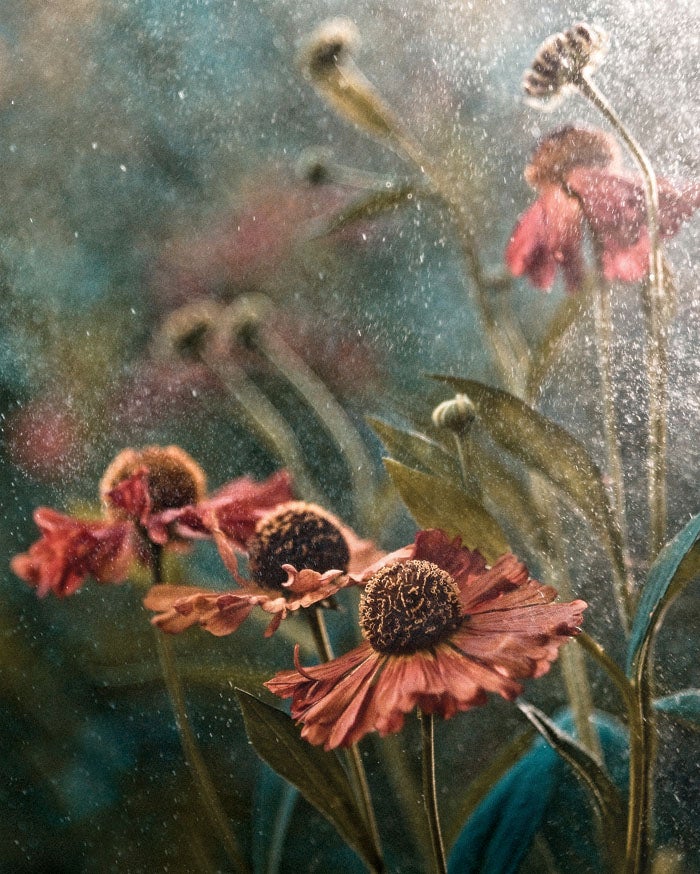 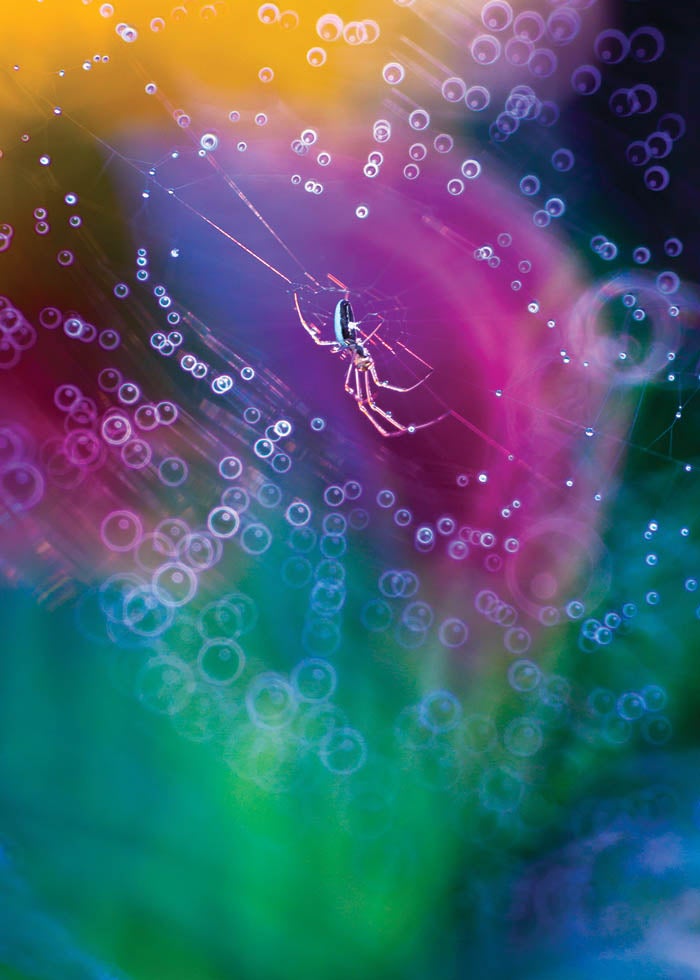 For the spider portrait, Wasiczek added color by pulling a toy into her background. She shot with a Nikon D300 and Tamron 90mm f/2.8 SP AF Macro lens, and exposed for 1/80 sec at f/5.6, ISO 200. A special effects filter produced the circular highlights. 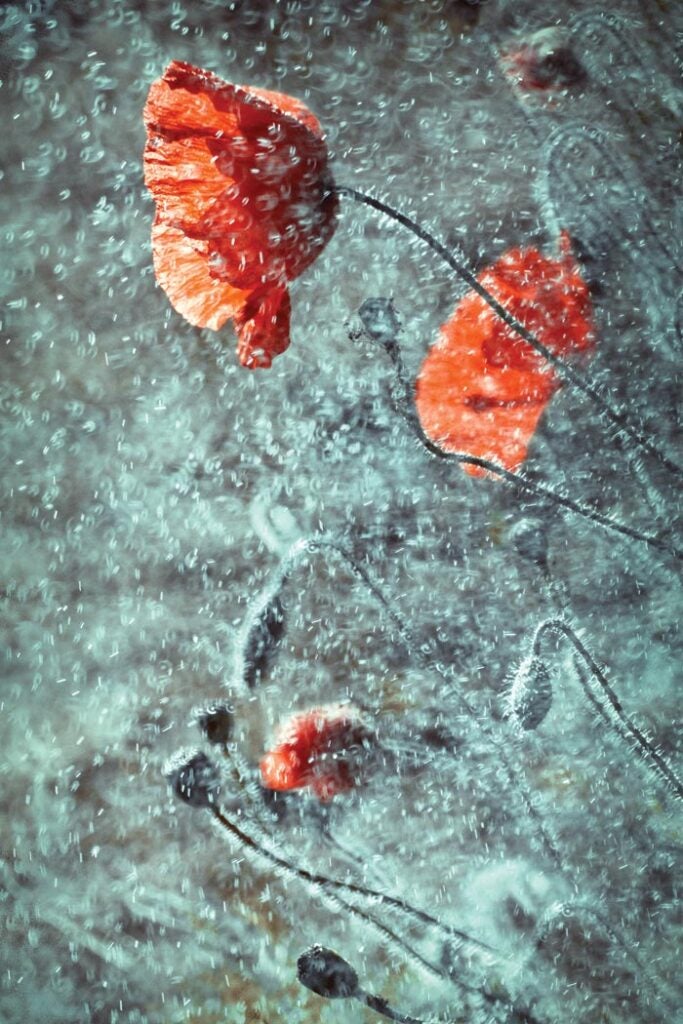 Wasiczek often contrasts fore- and background color palettes to draw attention to her subjects. At bottom right an unsaturated background sets off the poppies. Made with a Nikon D300 and Tamron 90mm f/2.8. 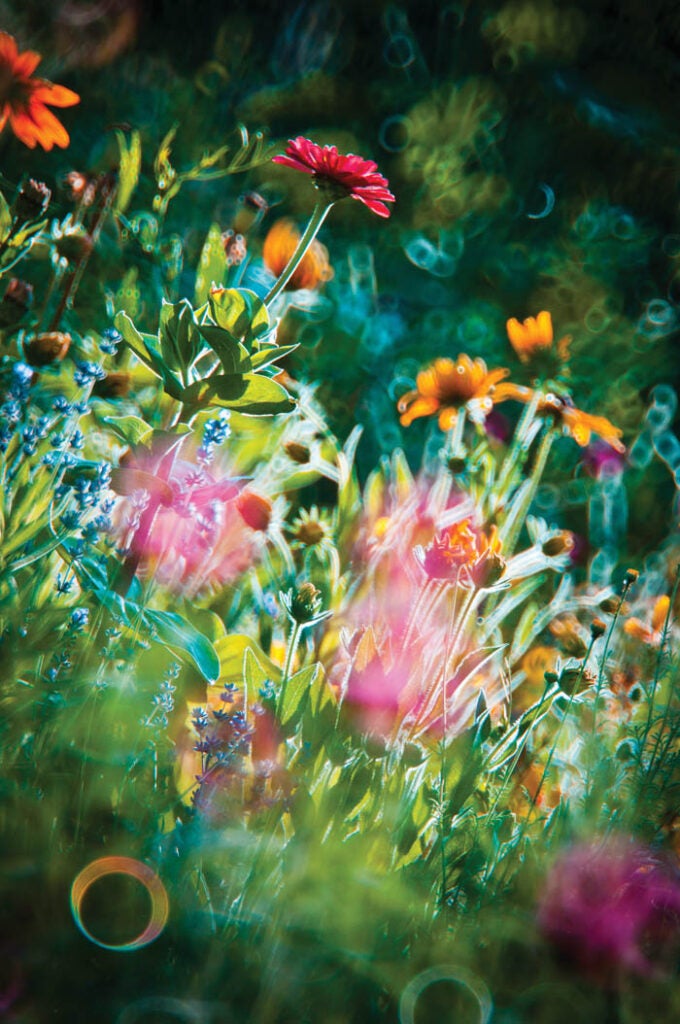 Jazzing Up Her Backgrounds

Wasiczek’s backgrounds are as interesting as her flowers. Here, she employs her mirror lens’ distinctive donut-shaped bokeh. Shot with the Nikon D300 and a Rubinar 300mm f/4.5 mirror lens. 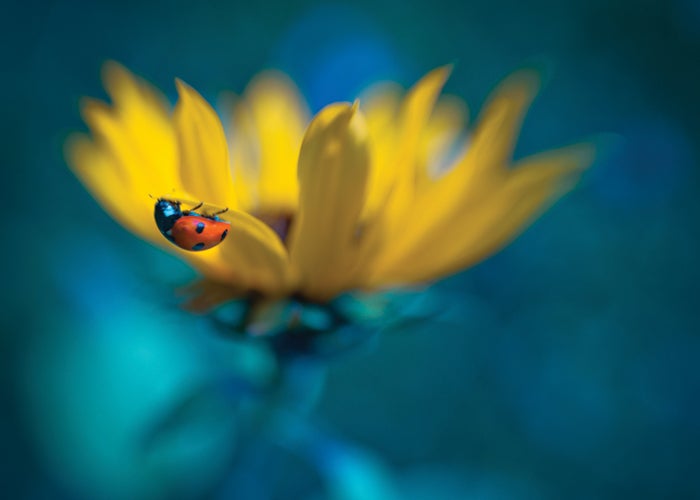 Hanging on a Sun Flower

A master of drawing attention to her subjects with selective focus, Wasiczek does it with tools like the Lensbaby Composer Pro and Sweet 35 optic used for this ladybug. Her camera: the Nikon D700.
Features