Searching for the Seventies: The Documerica Photography Project 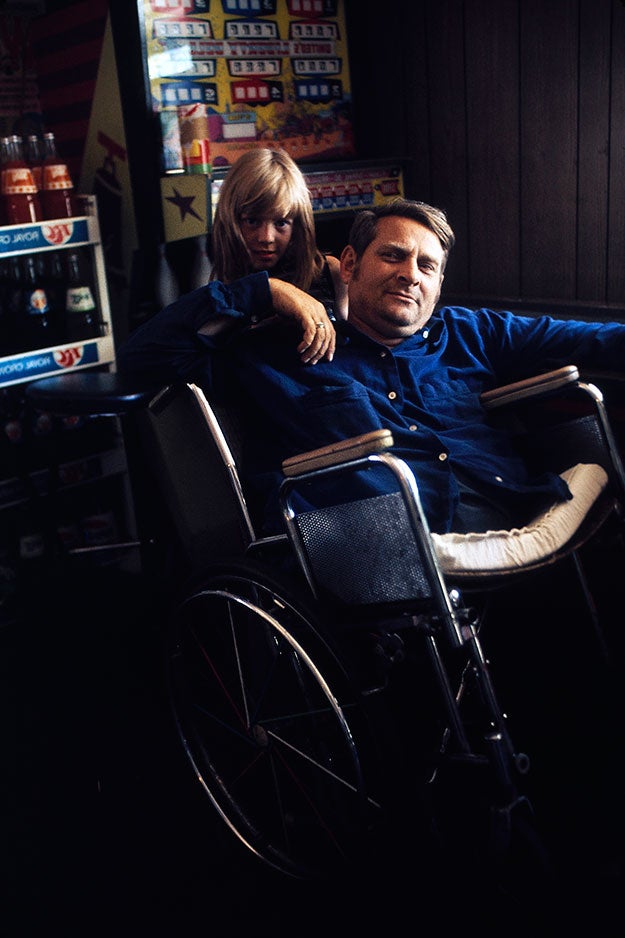 Jack Smith has no legs. That’s him pictured above. He had been working in a West Virginia coal mine for only a year before a tunnel roof collapsed, instantly severing one of his legs and crushing the other. Doctors couldn’t save his remaining leg, and his lower half was amputated near his hips at age 21. It would be 18 years before he received his first Workmen’s Compensation check.

Smith’s is just one of the thousands of human faces given to environmental issues in the United States by the photography project Documerica in the 1970s. Funded by a nascent Environmental Protection Agency in 1971, Documerica was the pet project of Gifford Hampshire, an original EPA public affairs employee and former National Geographic photo editor. Its purpose was to raise the agency’s profile.

On Friday, March 8, 2013, the National Archives and Records Administration of the United States opens Searching for the Seventies: The Documerica Photography Project, with a selection of 94 images chosen from over 22,000 taken by 70 photographers from 1971-1977. Headed by Bruce Bustard, a senior curator at the archives, the show attempts to connect the dots between the energy crisis, environmentalism, urban renewal, economic challenges, and the role of women in American society in the 70s, using people as the common thread.

“The motto of the project is everything is connected to everything else,” says Bustard, echoing the philosophy of prominent 1970s environmentalist Barry Commoner. “The 70s has a reputation—people roll their eyes, ‘oh yea, disco, leisure suits, pet rocks and streaking,’—but really it was the beginning of a lot of the issues that are familiar to us today. It was inflation, and unemployment, and de-industrialization, and the role of government in peoples lives.”

If Documerica’s ambition and scope recall memories of the Farm Security Administration’s legendary photography program, it’s no accident. Hampshire was particularly taken with the influential depression-era project, and according to Bustard, spent his whole life hoping to do something similar. And as Popular Photography reported in our April 1972 issue, Arthur Rothstein, one of the original members of the FSA program, worked on Documerica as a consultant. The article is on display as part of the exhibit at the archives.

Jack Corn, the photographer who travelled to Rhodell, West Virginia in 1974 and photographed Jack Smith, was also a child of the depression (b. 1929), and his early experiences observing American poverty travelled with him throughout his life. A staff photographer for the Tennessean, Corn spent 40 years photographing Appalachia. But it was the plight of the American coal miner that truly broke his heart.

“We couldn’t have won World War II without coal,” he explains. “You had to have boots on the ground. But coal—our industrial might—helped win the war.” A veteran himself, Corn bought his first house when he returned to the states with a GI Bill of Rights. “These guys (the miners) got rewarded with terrible roads, terrible schools, absolutely no good health service, no sewage, no good water. They were the forgotten people. That was their reward for fighting in the coal mine during the war.”

Coal worker’s pneumoconiosis, commonly called “black lung disease,” was just beginning to enter the U.S.’ collective consciousness. But the irresponsible disposal of slag, safety issues, and the overall squalid living conditions in coal mining towns painted a very different picture of the 1970s than “Saturday Night Fever” would in 1977. Corn’s photos, especially those of Smith, turned a broad, complicated environmental issue into an uncomfortably personal one. It’s hard to imagine anyone who knew Smith, or had seen him wheeled down the street from the tavern he runs to his house for lunch, allowing him to waste away for almost two decades without receiving compensation for his sacrifice. But before Corn took his picture, few outside of Rhodell even knew he existed.

Other photographers featured in the new show achieved similar ends in very different parts of the country. Michael Philip Manheim had one of the most challenging assignments, traveling to East Boston to shine a metaphorical light on the effect of noise pollution. Focusing on Neptune road, which lies adjacent to Logan International Airport (one of the nation’s busiest), he took stark photographs of landing jetliners that appear to be scraping rooftops (pictured above) and living room walls supposedly cracked by the vibrations from massive engines flying overhead. In the process, he transformed an invisible problem into one that was painfully obvious. John H. White’s document on the black community in Chicago gave the country a closer look at one of its most vibrant cultural hubs, and put human faces on the burgeoning Nation of Islam beyond Elijah Muhammad and Malcolm X.

Searching for the Seventies will run through September 8, 2013, in the Lawrence F. O’Brien gallery at the National Archives. 16,000 photos from the original project have already been posted online; you can see them here. Bustard hopes that nostalgia and cultural interest in the 1970s will bring people to the show, and in turn increase awareness of an important, if relatively forgotten, cultural document.

“The individual photographs are really terrific,” Bustard says, “but taken as a whole, it’s a compelling portrait of the United States from 1971-1977.”