A Boat, a Whale Carcass, and a Camera: Capturing Great White Sharks With Richard Matthews 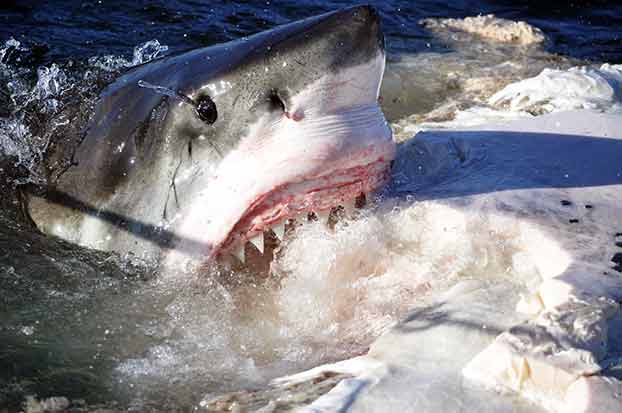 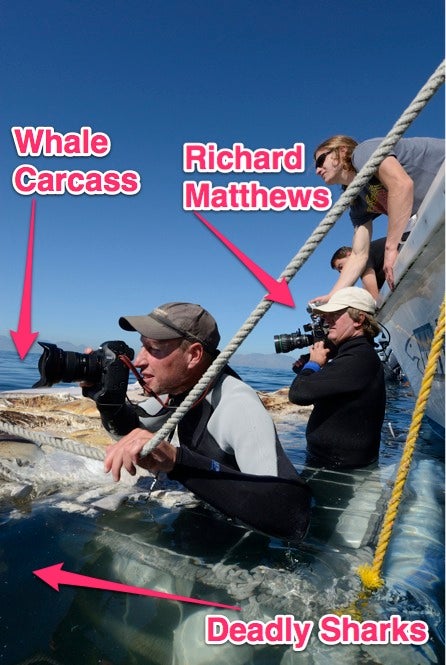 We love stories where photographers and cinematographers go to extraordinary lengths to get the shot. In order to get footage for Discovery Channel’s Africa series (Tuesday nights at 10pm), Richard plunked himself on a shark cage next to a whale carcass and waited for four days while great white sharks came to chow down. Here’s the rest of his story. His segment airs Tuesday, January 29th at 10 PM on Discovery Channel.

How did the idea come about to shoot sharks using a whale carcass as bait?

People in the past have filmed sharks on whale carcasses so we knew it would be a real spectacle if we could get it. We put out a notice to the local people to let us know if they saw one. A couple years ago, one of our friends down here who does shark cage diving actually found the whale quite a long way out in the bay. It was so big that, even though he has a rather large boat which takes tourists diving, he couldn’t tow it into shore. It was already starting to decay a little bit.

Are whale carcasses a common thing in your part of the world?

Every year whales come and visit the shores of South Africa. Every year, there are one or two that end up dying for one reason or another. They might get tangled in ropes or they could get hit by a boat or something like that. They become a problem if it happens near any of the popular beaches. They’re unsightly and smelly, but the whale blubber leaks oil into the ocean and that can be like a chum for sharks. They try and discard them as soon as possible.

Once you found your carcass, how did you set up the shoot?

The South African Navy has a base somewhat close to where we are, so we got them to come and help us tow the whale. We had to get permission from the local authorities as well. We put it near an island in the middle of a bay. We were were 5 KM from shore, so we were completely out of view from the beach and we anchored it to the sea floor.

They asked us to monitor the whale until it completely decomposed. Someone had to be there every single day to make sure it was securely tied until it rotted away and sank to the ocean floor.

Once it was in place, was it just a matter of getting a boat and waiting for the sharks to show up?

We were in a 50-60 foot boat, so we were filming down upon the sharks. We had spotters up in the boat looking for sharks in the water. There was no point trying to film at night, so we would go out every day in early dawn and come back in the evening.

You’d be sitting out there in the water with nothing in sight except for this rotting whale carcass and then suddenly, out of the blue, comes a shark. They only stay there for a few moments. Sometimes they stay for half a minute if they’re trying to get a big piece of blubber or meat. You have to shoot quickly and get what you need.

Where were you in relation to the sharks and their dinner?

What about the underwater footage?

We had a couple people with cameras on poles. It was far too dangerous to actually dive under the water with the sharks. The visibility was not that great. Obviously, you’re attracting sharks all over the place and with such a big carcass, you can end up being part of the meal.

Were you using an underwater camera or at least a housing?

I didn’t have an underwater camera since I was filming the topside shots, so I had to be very careful not to damage it. As soon as you put a camera into an underwater housing, it’s more restrictive. It gets really heavy. So, I held a large broadcast camera above the water and was directed by people on the boat. We had some DSLRs on board, as well as some Sony cameras and a Panasonic Vari Cam for the high speed footage.

When I wasn’t filming, I’d hand the camera back to the guys in the boat. It was pretty cold water and holding the camera would be very tiring. The water was in the 40s.

So it wasn’t too tough on the cameras, then?

One thing you learn quickly is that you can’t really touch the carcass. It’s almost like silicon and it gives off this greasy oil that you can’t get off. Our wetsuits became smeared as if you had rubbed a bar of soap had been dragged across our neoprene suits. It wouldn’t come off so you didn’t want to touch anything. If that got onto the lenses, it wouldn’t come off.

Did you use any action cameras during the shoot?

We do use GoPros, but when you have the possibility for a bigger camera, the GoPro definition isn’t as good. If you can only put a GoPro somewhere because it’s too small or dangerous, then it’s absolutely brilliant. But, the quality of a bigger camera is still noticeably better.

Did you have any close calls with the sharks during the shoot?

On one occasion there was a shark that came around the carcass to try to get between the carcass and the boat and of course, I was in the way. The shark came so close I could’ve touched it on the nose. He was trying to come over the shark cage on which I was sitting. I couldn’t climb back into the boat or onto the whale. Everyone on the boat was telling me to hit the shark on the nose. I didn’t believe the shark was actually targeting me. It just wanted to find a different spot on the carcass. But, it’s a wild animal and if I had frightened it the reaction could be anything. That shark could easily have come plowing across the top of the shark cage with a few swipes of his tail. I didn’t do anything. I didn’t want to give it a reason to bite me. Fortunately, it realized it wasn’t going to get across the cage so it swam away under the boat. It was a relief