When 42nd Street Was Still Gritty

A Q & A with photographer Langdon Clay about his 1979 panoramic of the infamous street. 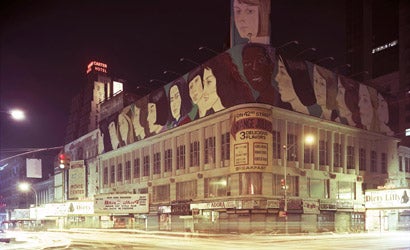 In 1979, photographer Langdon Clay created a meticulous panoramic of the seedy Times Square block of 42nd Street, which epitomized the grunge New York politicians were pledging to “clean up.” Originally made with an 8×10 view camera and physically spliced together into a 15-foot print, the panoramic has now been recreated digitally. Below, friend and fellow photographer William Greiner explores Clay’s original creative process and the changes that time has wrought on the street, as well as the artist.

William Greiner: When did you start making color photographs?
Langdon Clay: Late ’74 or thereabouts. For one thing it was more expensive and for another you couldn’t print it yourself. So it took a while to get to it. Mainly I woke up one day and wondered why I spent so much time trying to perfect a world I wasn’t actually seeing, or as far as I could tell anybody else was seeing. Odd that so many people have done so well in an abstract world of 50 or so tones from black to white. Historically, in America anyway, I think many of us were in the thrall of the Magnum photographers and Cartier-Bresson in particular — the snapshooters Winogrand, Friedlander, and Louis Faurer were not yet on my radar anyway. Magnum’s success I guess came from the precedents set by Life, Look, and the Saturday Evening Post. Anybody in their fifties now will remember as if it were yesterday when they saw for the first time at age ten the Time/Life version of WWII. A soldiers body face down on the beach with his helmet awash in sand or a kid apparently your own age reduced to skin and bones at Auschwitz. That was photography right there in stark black and white. That was reportage; that was journalism. That was real life. That was then and this is now. For me now is color, and it started back in 1974.