This Week On ‘The Shot’

For episode 2 of VH1's new reality show, photographers face models straight from the zoo and the playground. 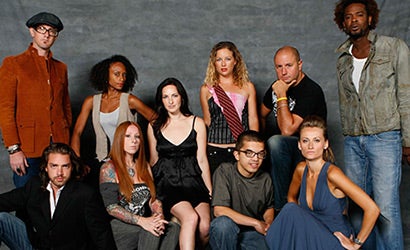 For those new to the new VH1 photography reality show “The Shot,” see our episode 1 recap.

The Wildlife Assignment
The first assignment challenged the photographers to handle “less than cooperative talent,” namely a camel, a monkey and a fanged tarantula. The contestants chose cards to see which animal they were shooting, and then had 15 minutes to capture the creatures — which host Russell James (who we still haven’t seen wearing shoes, by the way) pointed out had an even shorter attention span than those in the fashion industry. The camel sent a model running with some interesting vocal vibrations and decided to relieve himself during John’s time, the trainer would not allow the unusually agitated monkey (unsettled by the camel) to be near the model, and the tarantula nearly gave Piper a nervous breakdown. Dean seemingly made a critical error by shooting with his “trademark” wide aperture, which served to give only the hairy arachnid focus while leaving the clothes, the true commercial value of the picture, buried in a blurred background. Meanwhile Piper spent most of her time adjusting the lighting, and failing to get a single shot of the model and the tarantula in her 15 minutes of shooting time. Airic, however, followed the spider all over the brave model’s body, changing his angle with every click. The lesson learned? If an animal moves, flow with it because those images might be the best shots you get. And remember to keep most your the focus on the clothes, or your editors will bite.

The Young Divas Assignment
The second assignment was a three-page editorial spread where each shot needed to include five models. Equipped with photos of clothing, the teams all devised racy themes for their editorial stories including a naked servant handing out clothes and a tale of jealousy and dangerous liaisons. But on set the next day, the fashion photographers were met with a horde of screaming preschoolers. Airic quickly ditched the nudity — “We can’t do that today. We’ll go to jail.” — but seemingly learned little from the critical beatdown he got after Episode 1’s near-pornographic nude model shoot.

With a working theory that the young models had been jacked up on Mountain Dew before the shoot, Jason and the rest of Maria’s team staged a photo shoot of kids playing in a garden scene. Front a center was a large bucket of water, which the children immediately introduced themselves to, soaking their clothes in the process. James liked the contemporary and edgy feel of the make-believe ad campaign, but the team took criticism for not respecting the primacy of the clothes. For his team’s shoot, former Bosnian soldier Dean directed the kids with that same military gusto that he bossed his teammates with. But their vision of a spaghetti dinner turned narcoleptic ended up looking like a dining room massacre when the sleeping children played a little too lifeless. The judges felt that the spread was too dark and heavy for a children’s fashion line. Airic’s team shot scattered and wide photos of an art class missing a teacher, but their spread was missing a story. James’s lesson for this shoot? When dealing with subjects who can’t pronounce “couture,” work in an environment such as a beach or park where the models have little restriction.

The Final Shot (Spolier Alert!)
James again emphasized the need for storytelling skills in an editorial spread, and criticized Airic’s team for lack of focus in their concept. Airic’s team also shot “very bad catalogue” photos, where only the backs of the shirts could be seen, potentially annoying clients. But the team singled out as the weakest was Dean’s team, with their unintentional depiction of a suicide pact. Ivan and Piper were in the hot seat, and Ivan was sent home in a tearful elimination. Next week things will get rocky and wet when photographers shoot high on a mountain and deep underwater.

Cast photos, bios, and tips of the trade from host Russell James can be found on VH1’s website.